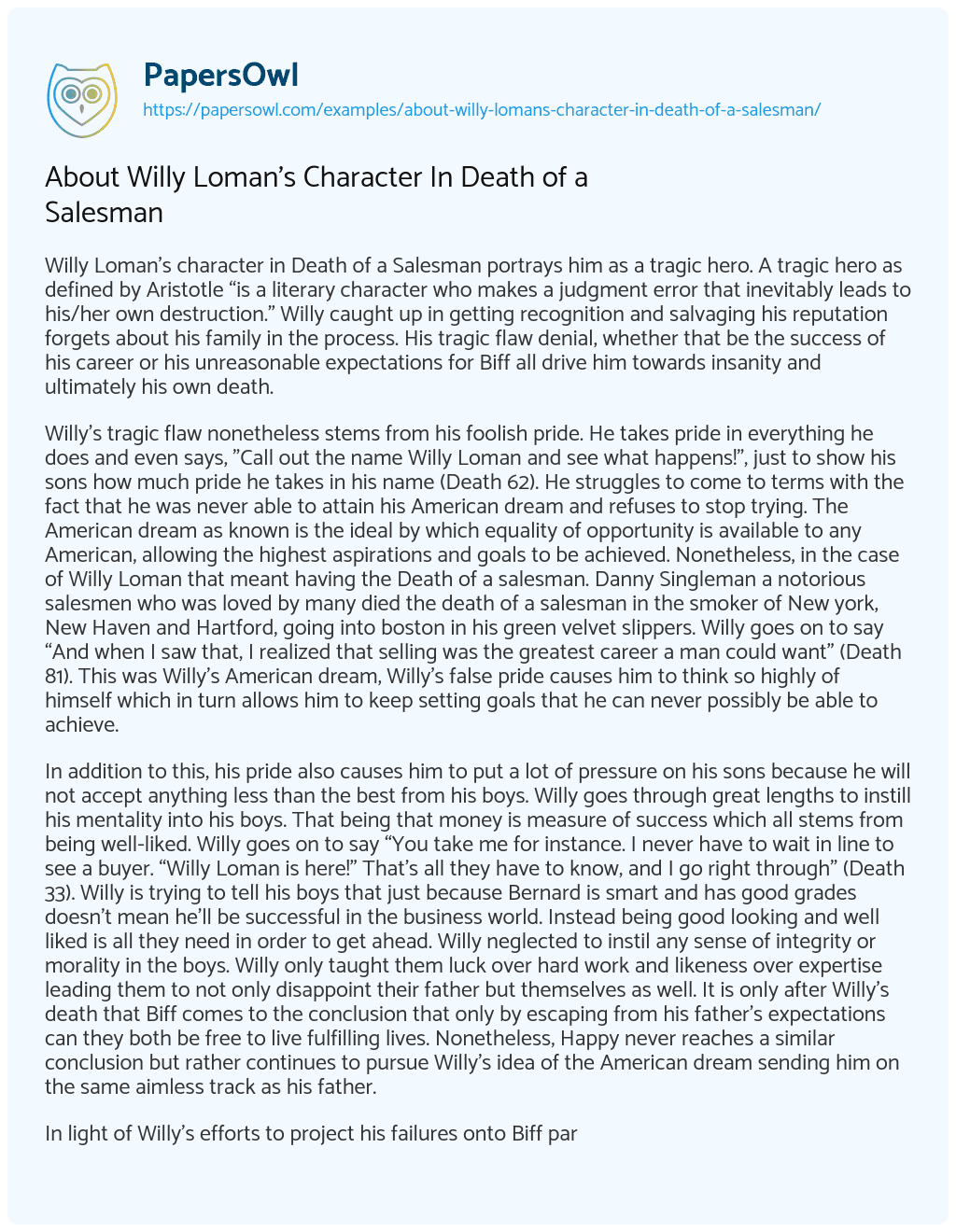 Willy Loman’s character in Death of a Salesman portrays him as a tragic hero. A tragic hero as defined by Aristotle “is a literary character who makes a judgment error that inevitably leads to his/her own destruction.” Willy caught up in getting recognition and salvaging his reputation forgets about his family in the process. His tragic flaw denial, whether that be the success of his career or his unreasonable expectations for Biff all drive him towards insanity and ultimately his own death.

Willy’s tragic flaw nonetheless stems from his foolish pride. He takes pride in everything he does and even says, “Call out the name Willy Loman and see what happens!”, just to show his sons how much pride he takes in his name (Death 62). He struggles to come to terms with the fact that he was never able to attain his American dream and refuses to stop trying. The American dream as known is the ideal by which equality of opportunity is available to any American, allowing the highest aspirations and goals to be achieved. Nonetheless, in the case of Willy Loman that meant having the Death of a salesman. Danny Singleman a notorious salesmen who was loved by many died the death of a salesman in the smoker of New york, New Haven and Hartford, going into boston in his green velvet slippers. Willy goes on to say “And when I saw that, I realized that selling was the greatest career a man could want” (Death 81). This was Willy’s American dream, Willy’s false pride causes him to think so highly of himself which in turn allows him to keep setting goals that he can never possibly be able to achieve.

In addition to this, his pride also causes him to put a lot of pressure on his sons because he will not accept anything less than the best from his boys. Willy goes through great lengths to instill his mentality into his boys. That being that money is measure of success which all stems from being well-liked. Willy goes on to say “You take me for instance. I never have to wait in line to see a buyer. “Willy Loman is here!” That’s all they have to know, and I go right through” (Death 33). Willy is trying to tell his boys that just because Bernard is smart and has good grades doesn’t mean he’ll be successful in the business world. Instead being good looking and well liked is all they need in order to get ahead. Willy neglected to instil any sense of integrity or morality in the boys. Willy only taught them luck over hard work and likeness over expertise leading them to not only disappoint their father but themselves as well. It is only after Willy’s death that Biff comes to the conclusion that only by escaping from his father’s expectations can they both be free to live fulfilling lives. Nonetheless, Happy never reaches a similar conclusion but rather continues to pursue Willy’s idea of the American dream sending him on the same aimless track as his father.

In light of Willy’s efforts to project his failures onto Biff parallels cannot help but be drawn between him and Marilyn Lee from the novel Everything I Never Told You. Marilyn after giving birth to Lydia and Nath becomes increasingly dissatisfied with her life. As a result Marilyn ultimately projects her obsession with becoming a doctor onto Lydia, encouraging her daughter to enroll in advanced science courses. It is only after Lydia’s death that Marilyn begins to come to terms with that fact that she may not have understood her daughter all that well. Similar to Marilyn, Willy cannot let go of the American dream that he has built his life around. He has no hopes of achieving the American Dream himself, so he transferred his hopes to Biff. With that being said Fulfilling Biff’s request of accepting one another’s commonness and establishing a sense of mutual respect would involve discarding his dreams and ambitions forever. Admitting that he believed in the American Dream for nothing and that is life was all just one big failure.

With this in mind Willy is still delusional when he kills himself. Unable to come to terms with Biff and desperate to fight for his own identity he contemplates suicide. This would then allow for his family to cash in on his life insurance. Willy believes that Biff would go far with twenty thousand dollars to his name and start his own business. As a final effort to salvage whatever was left of his American dream Willy makes one last sale, that being his own life. Not only that his death is also symbolic of Ben’s mantra that being “The jungle is dark but full of diamonds.” What this means that Willy as salesmen never had anything tangible to show for his efforts whereas compared to Ben he had wealth and fortune. That being said in deciding to commit suicide Willy perceives himself as entering a dark jungle to get diamonds for his son. Nonetheless, Willy remains in denial up until the end never fully able to come to terms with his misguided hopes for Biff.

About Willy Loman’s Character In Death of a Salesman. (2020, Oct 23). Retrieved from https://papersowl.com/examples/about-willy-lomans-character-in-death-of-a-salesman/