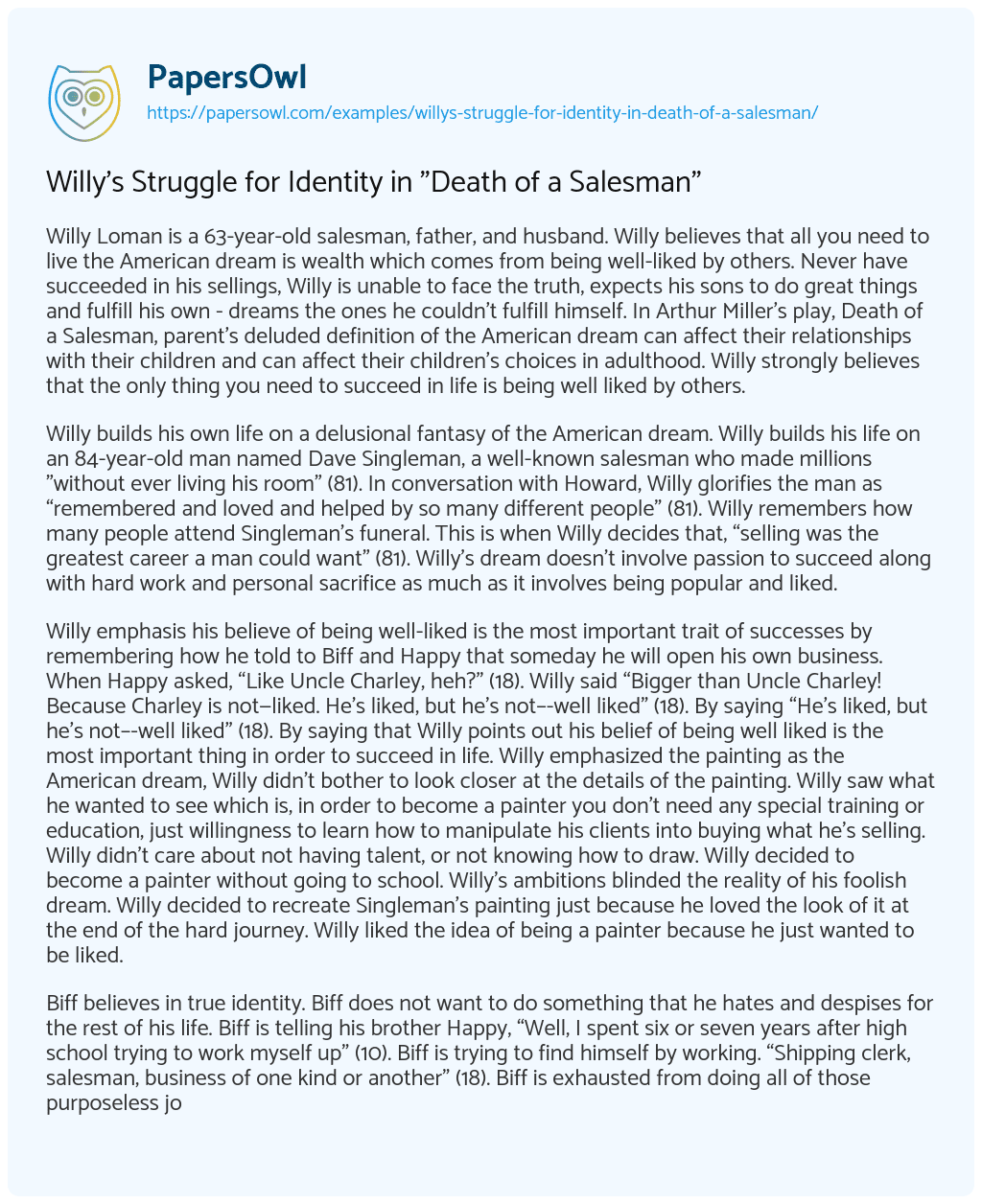 Willy Loman is a 63-year-old salesman, father, and husband. Willy believes that all you need to live the American dream is wealth which comes from being well-liked by others. Never have succeeded in his sellings, Willy is unable to face the truth, expects his sons to do great things and fulfill his own – dreams the ones he couldn’t fulfill himself. In Arthur Miller’s play, Death of a Salesman, parent’s deluded definition of the American dream can affect their relationships with their children and can affect their children’s choices in adulthood. Willy strongly believes that the only thing you need to succeed in life is being well liked by others.

Willy builds his own life on a delusional fantasy of the American dream. Willy builds his life on an 84-year-old man named Dave Singleman, a well-known salesman who made millions “without ever living his room” (81). In conversation with Howard, Willy glorifies the man as “remembered and loved and helped by so many different people” (81). Willy remembers how many people attend Singleman’s funeral. This is when Willy decides that, “selling was the greatest career a man could want” (81). Willy’s dream doesn’t involve passion to succeed along with hard work and personal sacrifice as much as it involves being popular and liked.

Willy emphasis his believe of being well-liked is the most important trait of successes by remembering how he told to Biff and Happy that someday he will open his own business. When Happy asked, “Like Uncle Charley, heh?” (18). Willy said “Bigger than Uncle Charley! Because Charley is not—liked. He’s liked, but he’s not–-well liked” (18). By saying “He’s liked, but he’s not–-well liked” (18). By saying that Willy points out his belief of being well liked is the most important thing in order to succeed in life. Willy emphasized the painting as the American dream, Willy didn’t bother to look closer at the details of the painting. Willy saw what he wanted to see which is, in order to become a painter you don’t need any special training or education, just willingness to learn how to manipulate his clients into buying what he’s selling. Willy didn’t care about not having talent, or not knowing how to draw. Willy decided to become a painter without going to school. Willy’s ambitions blinded the reality of his foolish dream. Willy decided to recreate Singleman’s painting just because he loved the look of it at the end of the hard journey. Willy liked the idea of being a painter because he just wanted to be liked.

Biff believes in true identity. Biff does not want to do something that he hates and despises for the rest of his life. Biff is telling his brother Happy, “Well, I spent six or seven years after high school trying to work myself up” (10). Biff is trying to find himself by working. “Shipping clerk, salesman, business of one kind or another” (18). Biff is exhausted from doing all of those purposeless jobs, he refers to all of his jobs as “A measly manner of existence” (10). Biff question himself what is the point of “Devote your whole life to keeping stock, or making phone calls, or selling or buying” (11). Biff does not want to “suffer fifty weeks of the year for the sake of a two-week vacation” (10). He doesn’t see a target or calling from it. Working on the field is a much better way to succeed in life because you are honest. By being honest to yourself you know what you like, what you want from life, how you want your life to be. If you like something, you enjoy doing it. You will work your way up fairly quickly because you don’t do it just to succeed, you do it because you like it. This quote proves that Biff believes in his own identity, Biff is not looking for money or success, he is looking for his own true identity.

Willy is not able to accept himself for who he really is. Willy is caught up in an ideal based on his interpretation of the American Dream. Willy couldn’t let go of his perfect life as a salesman. Willy couldn’t face the fact that he is not the man he wanted to become and that he had failed to accomplish his dream life. Willy just cannot figure out what has gone wrong, so he starts seeing visions of the past. Willy is seeking for answers so Willy asks Ben, “What’s the answer? How did you do it?” (39). Willy felt trapped in his delusional dreams, that’s why he started looking for what went wrong. Biff tries to tell Willy, “You were never anything but a hard-working drummer who landed in the ash can like all the rest of them!” He tells his father that they are both losers, that they should admit that to themselves. Willy loses his job, barely could afford his living, has been a poor example of a father figure and a philandering husband. However, never admits this fact. He is still looking for that big opportunity in which he will strike it rich.

Biff is able to accept himself the way he is. Biff loses himself after catching his dad cheating on his mom. Biff’s comprehension of Willy as the perfect father is destroyed after Biff’s trip to Boston. Once he learns that Willy is having an affair, Biff rejects Willy and his philosophy about success and life. Biff considers Willy to be a “fake,” and he no longer believes in Willy’s delusional, fantasized dreams. Biff cattily to his “fake” father doesn’t go to Summer school to make up for his flunked Math grade and lives his parent’s house. However, Biff acknowledges his failure by telling his father that he is “dime a dozen,” and eventually manages to confront it. Biff wants his father to accept him for who he is. Biff is kept question himself in front of his father “Why am I trying to become what I don’t want to be?” (105) Biff begs his father “Will you let me go for Christ’s sake? Will you take that phony dream and burn it before something happens?” (106.) Biff is trying to convince his father to let him be who he wants to be before it would be too late. At the beginning of the play Biff tells Happy, “I could do the work I like and still be something” (13). Biff wants his father to believe and accept him the way he is and accept him as himself.

Biff is the realist while Willy is the never-ending dreamer. Willy from the beginning had wrong dreams. Willy believed that being well-liked salesmen are destined for success. Willy underestimated his own value as an individual. Willy should have not based his dreams on the successes of another man. As we all know Willy loses himself trying to figure out what went wrong. On the other hand, Biff, who is losing himself after finds out that his dad had unfair with another woman. Biff tries to work himself up by working different jobs to please his father. However, Biff realizes who he is and what he wants, as opposed to who Willy thinks he should be and who Biff needs to pretend to be in order to please him. Biff is different from Willy because he does finally accept and embrace the fact that he has been living a lie all of his life.

In the end, both men try to find a solution: Willy kills himself realizing that he had achieved nothing. Willy thought that his sons would receive 20000 dollars after his car accident so the insurance could provide his boys the life he couldn’t provide them himself. Biff simply walks away from the silly dream for good and decides to pursue his dream.

Willy's Struggle for Identity in "Death of a Salesman". (2019, May 20). Retrieved from https://papersowl.com/examples/willys-struggle-for-identity-in-death-of-a-salesman/