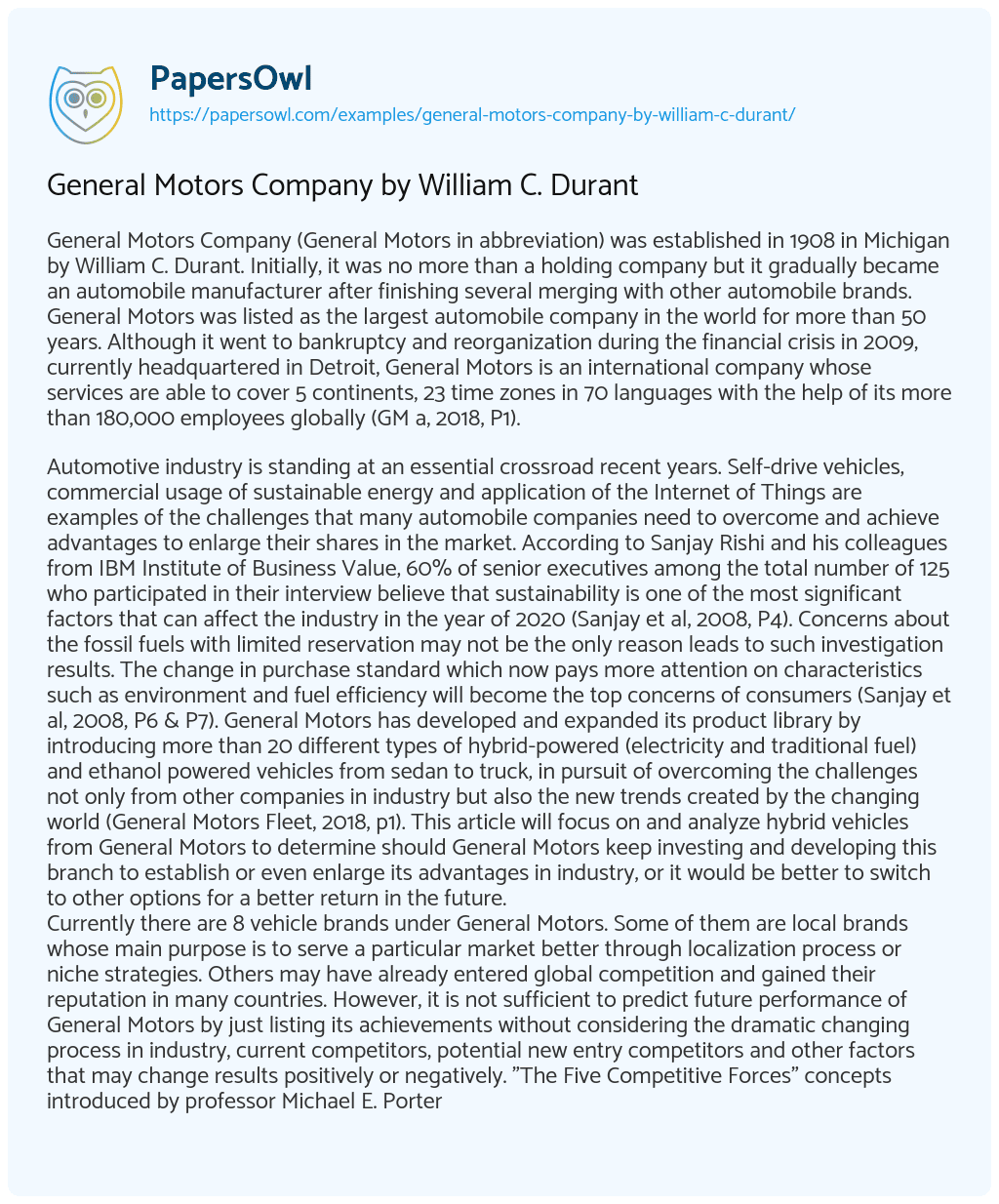 General Motors Company (General Motors in abbreviation) was established in 1908 in Michigan by William C. Durant. Initially, it was no more than a holding company but it gradually became an automobile manufacturer after finishing several merging with other automobile brands. General Motors was listed as the largest automobile company in the world for more than 50 years. Although it went to bankruptcy and reorganization during the financial crisis in 2009, currently headquartered in Detroit, General Motors is an international company whose services are able to cover 5 continents, 23 time zones in 70 languages with the help of its more than 180,000 employees globally (GM a, 2018, P1).

Automotive industry is standing at an essential crossroad recent years. Self-drive vehicles, commercial usage of sustainable energy and application of the Internet of Things are examples of the challenges that many automobile companies need to overcome and achieve advantages to enlarge their shares in the market. According to Sanjay Rishi and his colleagues from IBM Institute of Business Value, 60% of senior executives among the total number of 125 who participated in their interview believe that sustainability is one of the most significant factors that can affect the industry in the year of 2020 (Sanjay et al, 2008, P4). Concerns about the fossil fuels with limited reservation may not be the only reason leads to such investigation results. The change in purchase standard which now pays more attention on characteristics such as environment and fuel efficiency will become the top concerns of consumers (Sanjay et al, 2008, P6 & P7). General Motors has developed and expanded its product library by introducing more than 20 different types of hybrid-powered (electricity and traditional fuel) and ethanol powered vehicles from sedan to truck, in pursuit of overcoming the challenges not only from other companies in industry but also the new trends created by the changing world (General Motors Fleet, 2018, p1). This article will focus on and analyze hybrid vehicles from General Motors to determine should General Motors keep investing and developing this branch to establish or even enlarge its advantages in industry, or it would be better to switch to other options for a better return in the future.
Currently there are 8 vehicle brands under General Motors. Some of them are local brands whose main purpose is to serve a particular market better through localization process or niche strategies. Others may have already entered global competition and gained their reputation in many countries. However, it is not sufficient to predict future performance of General Motors by just listing its achievements without considering the dramatic changing process in industry, current competitors, potential new entry competitors and other factors that may change results positively or negatively. “The Five Competitive Forces” concepts introduced by professor Michael E. Porter from Harvard University may help us establish a reliable analysis framework in pursuit of more precise predictions and reliable commercial advice for board of directors of General Motors. According to Porter, it is industry structure that decides the profit level of an industry in general and distinguishable structures in different industries are caused by different participation level of the five factors he defined (Porter, 2008, P80). These five forces include threat of new entrants, bargaining power of buyers, threat of substitute products or services, bargaining power of suppliers and rivalry among existing competitors and separate analysis will be provided in this article to help us understand not only conditions of GM but also current industry conditions and revealed trends in the future.

Business is not static but dynamic in our daily life. Current flaws and potential returns allure people with ambition to develop new technologies or establish business model that can extend or even change the industry. Incumbents in the industry need to handle such conditions properly or they may lose in the competition as well as their market share and profitability eventually. There are several aspects that General Motors may currently have advantages or establish advantages relatively easier than its competitors. As previously mentioned, General Motors has been established more than a century and successfully expanded its business globally. Such divided structure can help it benefit from globalization, in which different countries can find their positions and reduce costs based on their comparative advantages, and more convenient customer accessibility, which helps it provide qualified localized services and maintain good reputation in the market. In addition, General Motors is one of the largest automotive manufacturers and its relatively large amount of producing capability, reserved patents and fixed assets already invested can be helpful in pursuit of economies of scale. These features work together to construct a high entry barriers to potential entrants. And it is confirmed from past experience since only a few new entrants such as Tesla survive in automotive industry. High fixed cost required that hinders a new electric vehicle manufacture called Faraday Future from entering the industry and relative low producing capacity which hinders Tesla from growing up faster are two examples how hard it is to enter the industry and gain market share after potential entrants overcome patents or other technical issues. However, green energy vehicles are more desirable in the future and existing large manufacturers might be harder to make a quick and steady transition because of factors such as limited investment to new technologies and costly development and maintenance of their traditional vehicle market. Based on previous analysis, threat of new entrants exists in automotive industry but the market is opened only for prepared new entrants.

Global automobile market is generally shared by 14 mainstream manufacturers with less than 100 brands (Bould, 2018, P1). However, there are more than hundreds of millions automobiles around the world and most of them are consumed by individuals for personal daily use. In general, it is difficult for individuals to enhance their bargaining power for better price based on their trivial purchase amount. However, it is also true that different manufacturers provide standardized products serving the same main purpose which is transportation usage. Hence, it is not hard for customers to switch to another manufacturer before they make their final decisions. This is an opportunity for everyone since it is possible to attract more customers and increase its market shares because of relatively low switching costs or opportunity costs of consumer. What’s more, price and reputation will also make contribution in consumer’s decision making process. The price of an automobile for normal daily usage is roughly $30,000 and it is a large proportion of personal income for many families since median household income in the U.S. was roughly $59,000 which is also the highest number in history in the year of 2016 (Loudenback, 2017, P1). This makes consumers to be sensitive to the price with high elasticity of demand. However, current customers demand more than transportation. Consumer preferences relate to new technologies or environment concerns may also affect their choices. Therefore, if General Motor cannot be attractive to its potential customers, the bargaining power of buyers may be higher than other manufacturers. Meanwhile, General Motors may have internal disadvantage in this aspect since price and the commercial usage of attractive concepts may be a good means for new entrants to open the market.

The power of suppliers

Automobile companies cannot and will not start producing from raw materials such as iron ore. They buy a large number of different intermediate products and assemble their vehicles through assembly line. It may be costly to switch suppliers since supply chain needs to be rebuilt and time is required. Such switching may also lead to temporary insufficient inventory or parts for production and repair usage. Therefore, although its relatively large order can help General Motors take advantage in negotiation with suppliers, potential high switching cost may reduce such advantage. In addition, the newly approved steel tariff may largely reduce General Motor’s profit (Bronner, 2018, P1) and requires it to use alternative materials. It will enhance the power of those alternative material supply and make General Motor harder to make its transition. Competition with other manufacturers may even worsen the situation since suppliers may have limited capacities to provide services and products in good quality. Thus, General Motor has obvious disadvantage in this aspect.

General Motors is an Automobiles Company