The Trail of Tears of Native Americans 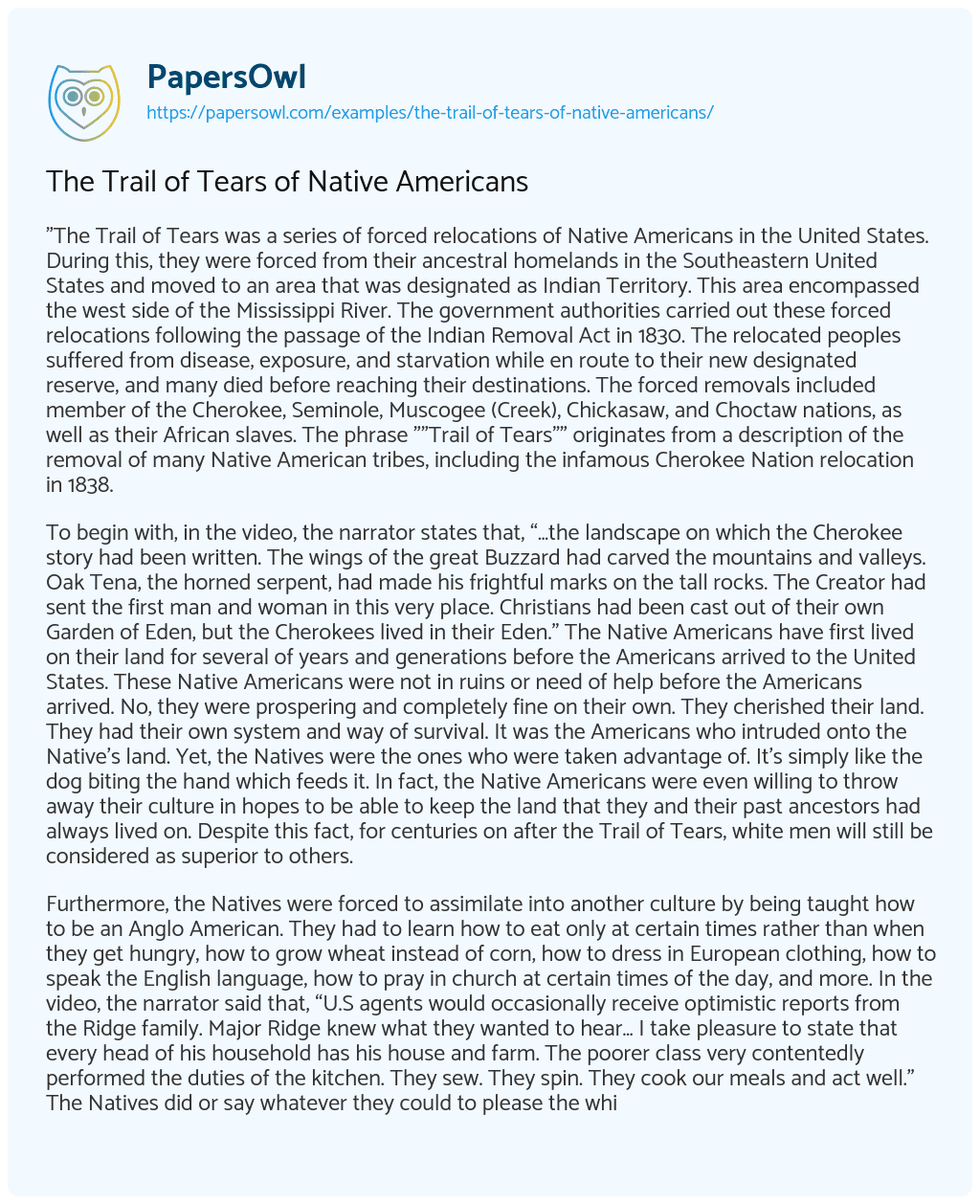 “The Trail of Tears was a series of forced relocations of Native Americans in the United States. During this, they were forced from their ancestral homelands in the Southeastern United States and moved to an area that was designated as Indian Territory. This area encompassed the west side of the Mississippi River. The government authorities carried out these forced relocations following the passage of the Indian Removal Act in 1830. The relocated peoples suffered from disease, exposure, and starvation while en route to their new designated reserve, and many died before reaching their destinations. The forced removals included member of the Cherokee, Seminole, Muscogee (Creek), Chickasaw, and Choctaw nations, as well as their African slaves. The phrase “”Trail of Tears”” originates from a description of the removal of many Native American tribes, including the infamous Cherokee Nation relocation in 1838.

To begin with, in the video, the narrator states that, “…the landscape on which the Cherokee story had been written. The wings of the great Buzzard had carved the mountains and valleys. Oak Tena, the horned serpent, had made his frightful marks on the tall rocks. The Creator had sent the first man and woman in this very place. Christians had been cast out of their own Garden of Eden, but the Cherokees lived in their Eden.” The Native Americans have first lived on their land for several of years and generations before the Americans arrived to the United States. These Native Americans were not in ruins or need of help before the Americans arrived. No, they were prospering and completely fine on their own. They cherished their land. They had their own system and way of survival. It was the Americans who intruded onto the Native’s land. Yet, the Natives were the ones who were taken advantage of. It’s simply like the dog biting the hand which feeds it. In fact, the Native Americans were even willing to throw away their culture in hopes to be able to keep the land that they and their past ancestors had always lived on. Despite this fact, for centuries on after the Trail of Tears, white men will still be considered as superior to others.

Furthermore, the Natives were forced to assimilate into another culture by being taught how to be an Anglo American. They had to learn how to eat only at certain times rather than when they get hungry, how to grow wheat instead of corn, how to dress in European clothing, how to speak the English language, how to pray in church at certain times of the day, and more. In the video, the narrator said that, “U.S agents would occasionally receive optimistic reports from the Ridge family. Major Ridge knew what they wanted to hear… I take pleasure to state that every head of his household has his house and farm. The poorer class very contentedly performed the duties of the kitchen. They sew. They spin. They cook our meals and act well.” The Natives did or say whatever they could to please the white men at the time. They even had their own African American slaves. The Native Americans had to completely change their way of life to be able to be approved by Anglo Americans and seen as someone who was civilized. The white men insisted that if they tried to be more like their white neighbors, then one day they could considered themselves as political and social equals. As their equal, they would be able to join their great councils and combine as one people, Americans.

However, no matter how much they changed or educated themselves to be like other white men. It was never enough. They would always be considered as second class citizens in their eyes. At the time, not even African Americans, free or not, were considered as the same status as the white people. This was simply because the color of their skin was different. If white men wouldn’t even accepted free, educated black men as their equal, there is no reason that they would accept another race as equal instead.

At first, only less than 2,000 of the original 18,000 Cherokee citizens joined the Ridges family to the journey to the west before the deadline. The Native Americans were told that they had two years to remove themselves from the land peacefully with support from the federal government. Sadly, not everyone at the time realized or agreed with the fact that this would be the only way for them to survive. Before in the video, Major Ridge once declared that, “Here, where we grew up, where we worked, and where we have cherished memories, I would willingly lie down and die if I could stop the removal.” Therefore, the vast majority of the Cherokee people who refused to leave must have felt the exact same way and were not ready to give up like Major Ridges. Removal was not even considered as an option to them. For them to have to leave the very ground which they had grown and taken care of since the very beginning was unacceptable. The land was their livelihoods, something given to them by the god from above. The Native Americans couldn’t even believe that just a few signatures on a piece of paper could be enough to remove them from their lands.

On the morning of May 26th 1838, three days after the removal deadline, they then were coerced from their homes, and forced to travel to the Indian Territory with only the clothes on their back. They were then hit with what perhaps could’ve been the worst winter in history. Because of this many died from disease, exposure, and starvation. As a result, 4,000 people died in the process. In order to revenge those who had fallen, there had to be someone to blame. In the video, a Cherokee named Thomas N. Belt declared that “the removal had caused the deaths of some four thousand people. Someone had to answer for that. Someone had to answer for those lives. A life taken in that way must be balanced now.” As a result, Major Ridge was shot five times and killed, while his son was taken from his home and stabbed multiple of times, beaten, and hit in the head with a hatchet. They believed that it was the Ridges family’s fault for not protecting the land like they should’ve instead of signing it away. If it weren’t for this family, so many people wouldn’t have died in vain.

Nevertheless, the Native Americans eventually found a way to live and thrive in their new land. They even thought that it looked strikingly similar to their old land. Their population nearly doubled from their original amount. They also had the finest education for both men and women in all of America.
With all of this in mind, the Native Americans fought with all they had in order to keep their land, but even that wasn’t enough. The Native Americans were even willing to throw away their culture and everything they knew in hopes to be able to keep the land that they and their past ancestors had always lived on. Despite this, they were treated cruelly and unfair and because this they also suffered greatly. They may have been able to thrive again, but this dreadful ordeal will always remain with them.”

The Trail of Tears of Native Americans. (2020, Sep 30). Retrieved from https://papersowl.com/examples/the-trail-of-tears-of-native-americans/