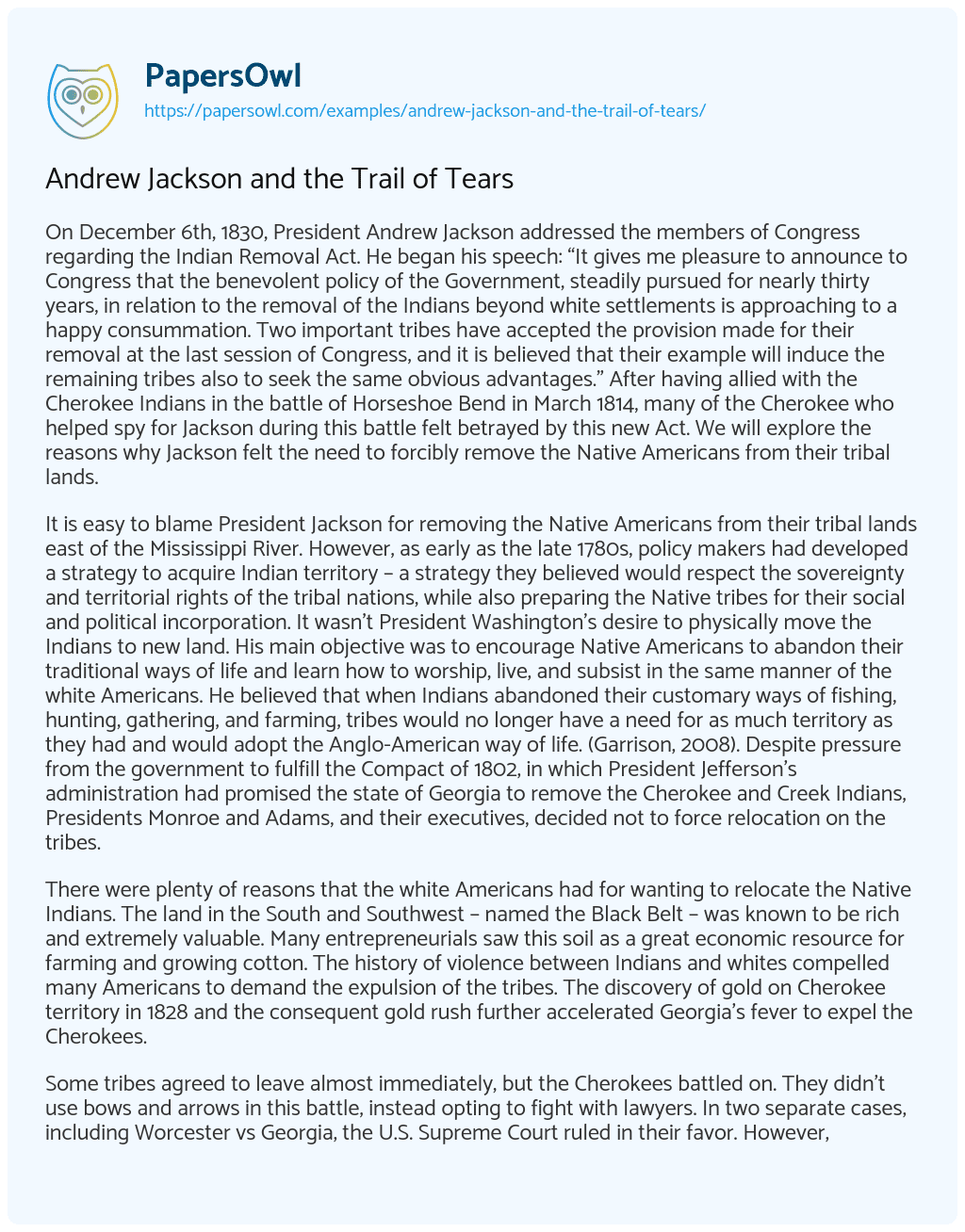 On December 6th, 1830, President Andrew Jackson addressed the members of Congress regarding the Indian Removal Act. He began his speech: “It gives me pleasure to announce to Congress that the benevolent policy of the Government, steadily pursued for nearly thirty years, in relation to the removal of the Indians beyond white settlements is approaching to a happy consummation. Two important tribes have accepted the provision made for their removal at the last session of Congress, and it is believed that their example will induce the remaining tribes also to seek the same obvious advantages.” After having allied with the Cherokee Indians in the battle of Horseshoe Bend in March 1814, many of the Cherokee who helped spy for Jackson during this battle felt betrayed by this new Act. We will explore the reasons why Jackson felt the need to forcibly remove the Native Americans from their tribal lands.

It is easy to blame President Jackson for removing the Native Americans from their tribal lands east of the Mississippi River. However, as early as the late 1780s, policy makers had developed a strategy to acquire Indian territory – a strategy they believed would respect the sovereignty and territorial rights of the tribal nations, while also preparing the Native tribes for their social and political incorporation. It wasn’t President Washington’s desire to physically move the Indians to new land. His main objective was to encourage Native Americans to abandon their traditional ways of life and learn how to worship, live, and subsist in the same manner of the white Americans. He believed that when Indians abandoned their customary ways of fishing, hunting, gathering, and farming, tribes would no longer have a need for as much territory as they had and would adopt the Anglo-American way of life. (Garrison, 2008). Despite pressure from the government to fulfill the Compact of 1802, in which President Jefferson’s administration had promised the state of Georgia to remove the Cherokee and Creek Indians, Presidents Monroe and Adams, and their executives, decided not to force relocation on the tribes.

There were plenty of reasons that the white Americans had for wanting to relocate the Native Indians. The land in the South and Southwest – named the Black Belt – was known to be rich and extremely valuable. Many entrepreneurials saw this soil as a great economic resource for farming and growing cotton. The history of violence between Indians and whites compelled many Americans to demand the expulsion of the tribes. The discovery of gold on Cherokee territory in 1828 and the consequent gold rush further accelerated Georgia’s fever to expel the Cherokees.

Some tribes agreed to leave almost immediately, but the Cherokees battled on. They didn’t use bows and arrows in this battle, instead opting to fight with lawyers. In two separate cases, including Worcester vs Georgia, the U.S. Supreme Court ruled in their favor. However, President Jackson declined to enforce the rulings. In 1835, a treaty between a small band of Cherokees, known as the Treaty Party, and federal officials, signed the Treaty of New Echota stipulating that all Cherokees would leave their tribal lands within two years in return for $5 million and large swaths of Indian Territory land. A vast majority of the Cherokees disagreed with the treaty, ultimately leaving the tribe out of options and bound by the treaty’s provisions. In 1838, federal troops began rounding up Cherokees – including women and children – at bayonet point and marching them to the stockades, internment camps that were crowded, hot, and ridden with disease. The journey west lasted upwards of six months with as many as 8,000 casualties along the way. (Grose, 2004)

Jackson’s attitude towards Native Americans was paternalistic and patronizing. He described them as children in need off guidance, and believed the removal policy was beneficial to the Indians. Most white Americans thought that the United States would never extend beyond the Mississippi River. Removal would save Indian people from the depredations of whites, and would resettle then in an area where they could govern themselves in peace. But some Americans saw this as an excuse for a brutal and inhumane course of action, and protested loudly against removal. Unfortunately, their protests did not save the Tribal Nations from removal. (PBS, 2019)

By 1837, the Jackson administration had removed 46,000 Native American people from their land east of the Mississippi, and had secured treaties which led to the removal of a slightly larger number. Most members of the five southeastern tribes, including the Cherokee, Chickasaw, Choctaw, Creek, and Seminole, had been relocated west, opening 25 million acres of land to white settlement and to slavery.

This is part of Andrew Jackson’s legacy. Although it has been pointed out many times that he was no longer President of the United States when the Trail of Tears occurred and had never intended such a monstrous result of his policy, it hardly excuses him. It was his insistence on the speedy removal of the Cherokees, even after he had left office, which brought about this horror.

Andrew Jackson and the Trail of Tears. (2020, Sep 30). Retrieved from https://papersowl.com/examples/andrew-jackson-and-the-trail-of-tears/

The Cherokees Vs. Andrew Jackson