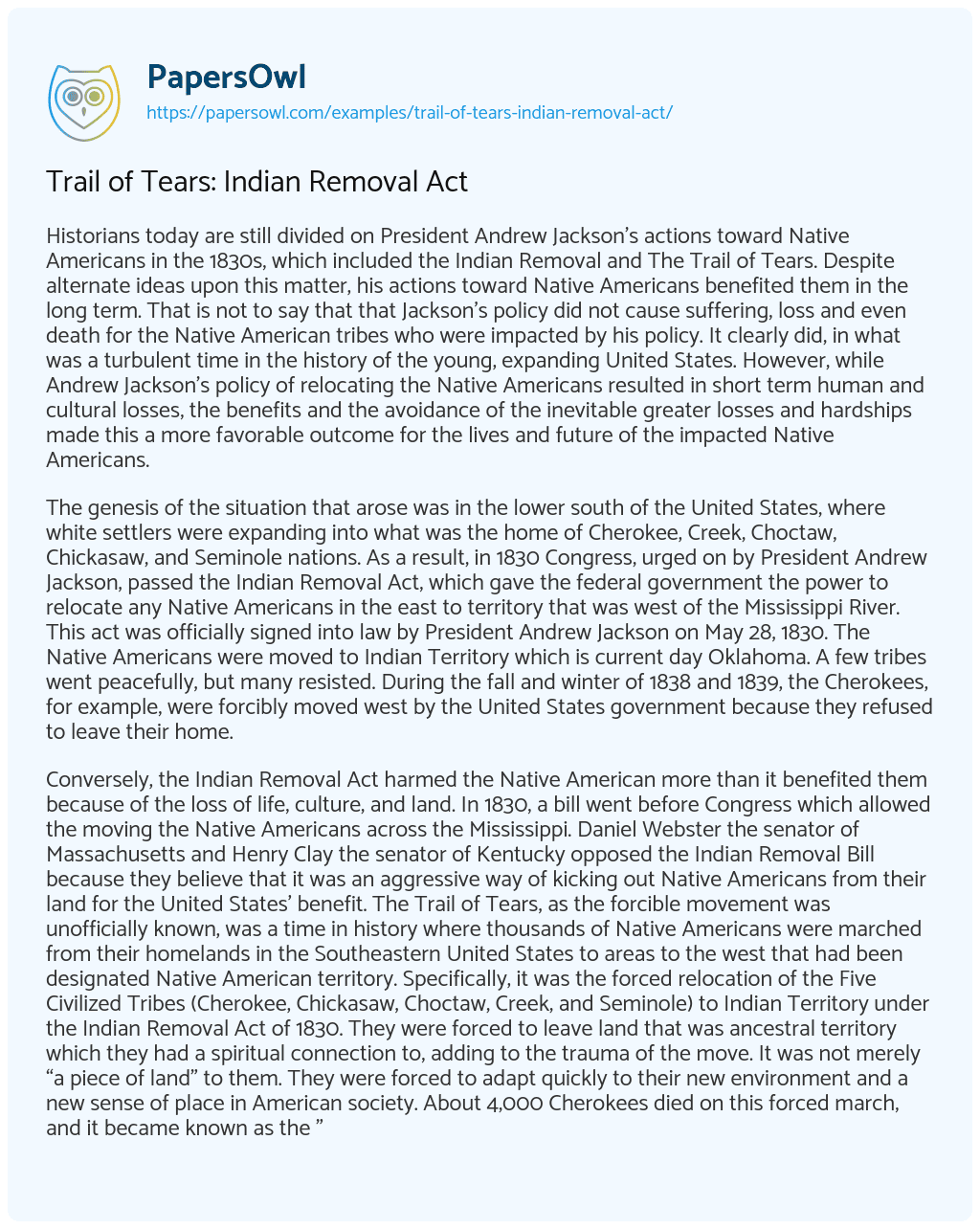 Historians today are still divided on President Andrew Jackson’s actions toward Native Americans in the 1830s, which included the Indian Removal and The Trail of Tears. Despite alternate ideas upon this matter, his actions toward Native Americans benefited them in the long term. That is not to say that that Jackson’s policy did not cause suffering, loss and even death for the Native American tribes who were impacted by his policy. It clearly did, in what was a turbulent time in the history of the young, expanding United States. However, while Andrew Jackson’s policy of relocating the Native Americans resulted in short term human and cultural losses, the benefits and the avoidance of the inevitable greater losses and hardships made this a more favorable outcome for the lives and future of the impacted Native Americans.

The genesis of the situation that arose was in the lower south of the United States, where white settlers were expanding into what was the home of Cherokee, Creek, Choctaw, Chickasaw, and Seminole nations. As a result, in 1830 Congress, urged on by President Andrew Jackson, passed the Indian Removal Act, which gave the federal government the power to relocate any Native Americans in the east to territory that was west of the Mississippi River. This act was officially signed into law by President Andrew Jackson on May 28, 1830. The Native Americans were moved to Indian Territory which is current day Oklahoma. A few tribes went peacefully, but many resisted. During the fall and winter of 1838 and 1839, the Cherokees, for example, were forcibly moved west by the United States government because they refused to leave their home.

Conversely, the Indian Removal Act harmed the Native American more than it benefited them because of the loss of life, culture, and land. In 1830, a bill went before Congress which allowed the moving the Native Americans across the Mississippi. Daniel Webster the senator of Massachusetts and Henry Clay the senator of Kentucky opposed the Indian Removal Bill because they believe that it was an aggressive way of kicking out Native Americans from their land for the United States’ benefit. The Trail of Tears, as the forcible movement was unofficially known, was a time in history where thousands of Native Americans were marched from their homelands in the Southeastern United States to areas to the west that had been designated Native American territory. Specifically, it was the forced relocation of the Five Civilized Tribes (Cherokee, Chickasaw, Choctaw, Creek, and Seminole) to Indian Territory under the Indian Removal Act of 1830. They were forced to leave land that was ancestral territory which they had a spiritual connection to, adding to the trauma of the move. It was not merely “a piece of land” to them. They were forced to adapt quickly to their new environment and a new sense of place in American society. About 4,000 Cherokees died on this forced march, and it became known as the “Trail of Tears.” As a result of this relocation, Native American tribes were broken up and many died and lost their culture. This suffering and loss, tragic as it was, is not in dispute. While it did lead to instant suffering, the Indian Removal Act was the best possible solution for the future of the Native Americans and it benefited them more than it hurt them.

The weight of the evidence shows that long before the Indian Removal Act, there had been many violent acts against the Native Americans. Violence between European settlers and Native Americans lasted for over four hundred years, ranging from small battles to large scale wars and forced labor systems on large estates. According to the 1775 Phips Proclamation in Massachusetts, King George II of Britain said that “subjects to embrace all opportunities of pursuing, captivating, killing and destroying all and every of the aforesaid Indians.” Phips proclaimed a brutal, inhumane, policy known as the Phips Proclamation that paid colonists for each Native American they scalped. This policy was particularly depraved in so far as colonists were paid more for scalping adult males, less for adult females, and less again for children. This formalized a policy of genocide and would have inevitably have spread to the new colonies and tribes in the Southeast. As the United States expanded westward, violent conflicts over territory increased dramatically. In 1784, a British traveler said, “White Americans have the most rancorous antipathy to the whole race of Indians; and nothing is more common than to hear them talk of extirpating them totally from the face of the earth, men, women, and children.” The same pattern would inevitably occurred, and likely escalated, if the Native Americans had not been moved, because as the United States expanded, so did their ideas about the treatment of Native Americans. Based on these occurrences, it is evident that if not for the Indian Removal, these ideas would have spread, and would have eventually harmed Native American lives in even more devastating ways.

Although the Indian Removal was supposed to be voluntary, removal became mandatory whenever the government thought necessary. In the Transcript of President Andrew Jackson’s Message to Congress ‘On Indian Removal’, Jackson stated, “The policy of the General Government toward the red man is not only liberal, but generous. He is unwilling to submit to the laws of the States and mingle with their population. To save him from this alternative, or perhaps utter annihilation.” Jackson believed that the Native Americans would simply not survive, and many of the Native Americans would die without being moved from their land. He believed that they would be slaughtered and annihilated living amongst the white men. Historical precedent, such as the Phips Proclamation strongly supports this idea. Jackson therefore correctly felt that the forced relocation, while not humane, gave the best possible hope to preserve peace, to be able to live with a degree of protection and prosperity, and protect the Native Americans from being scattered and completely destroyed.

In a statement by President James Monroe, he acknowledged that the Indian Removal would benefit the Native Americans. In his 1825 message to Congress, he stated, “The removal of the tribes from the territory which they now inhabit… would not only shield them from impending ruin, but promote their welfare and happiness…The Indian Removal will not only save Native Americans, but cause them to be prosperous and successful.” Therefore, with the Indian Removal, Native Americans would, after the pain of relocation and rebuilding, be free to live their lives without interference. Importantly, they would not have to live in the constant fear of being attacked from surrounding people. Lastly, it would allow them to focus on developing, growing and flourishing as a tribe on their own land.

Native Americans tribes gained many benefits from the Indian Removal. One tribe in particular who incurred these benefits was the Cherokee tribe. The Cherokees moved to the Northeast of the Indian Territory. Before this, they lived in the Appalachian Mountains, where they had access to rivers, mountain ranges, and forests. Having access to that land allowed them to move forward and survive, but they were able to thrive just as well as they were before they moved to this land. This is because they settled in the Ozark Mountains and the valleys of the Illinois, Arkansas, Grand, and Verdigris rivers, and they found lands similar to that which they had access to before the Indian Removal in the Appalachian Mountains.

Another tribe that benefited greatly from the Indian Removal was the Chickasaw tribe. They moved into Choctaw territory, which is in current day Southeastern Oklahoma, in 1837 with the promise that they would occupy its western portion, which was the land between the Cross Timbers and the open space of the Plains. However, the land in Indiana territory was given to the other tribes and there was no place for the Chickasaws. As a result, they sold their eastern lands to the United States government for approximately five hundred thousand dollars; with that money, they bought new land, and they were able to create a trust fund that made an income for the tribe of between sixty thousand dollars and seventy-five thousand dollars a year. The Chickasaws were able to live on the money that they received and the money that they were making without having to establish farms. For the Chickasaws, removal led them into a cash economy and a political situation that reduced their dependency on the natural environment, and advanced their civilization to be one that was more in line with the commercial needs of the time.

Native Americans ultimately had long-term prosperity because of the Indian Removal. For example, Native American people adapted the plants of their new environment to their beliefs in herbal medicines. In 1840, a missionary described the Choctaws in Indian territory as living in log cabins, raising corn, pumpkins, peas, melons, and yams, and their farms generally ranged from one to ten acres. Coal and oil payments in the Choctaw territory gave a new source of wealth in the later part of the century, and railroads which began to cross Indian territory after the Civil War led to a demand for timber for railroad ties and stone. These events helped Native Americans to succeed. Without the Indian Removal, the prosperity would simply not have happened; rather they would have and would have likely struggled to even survive.