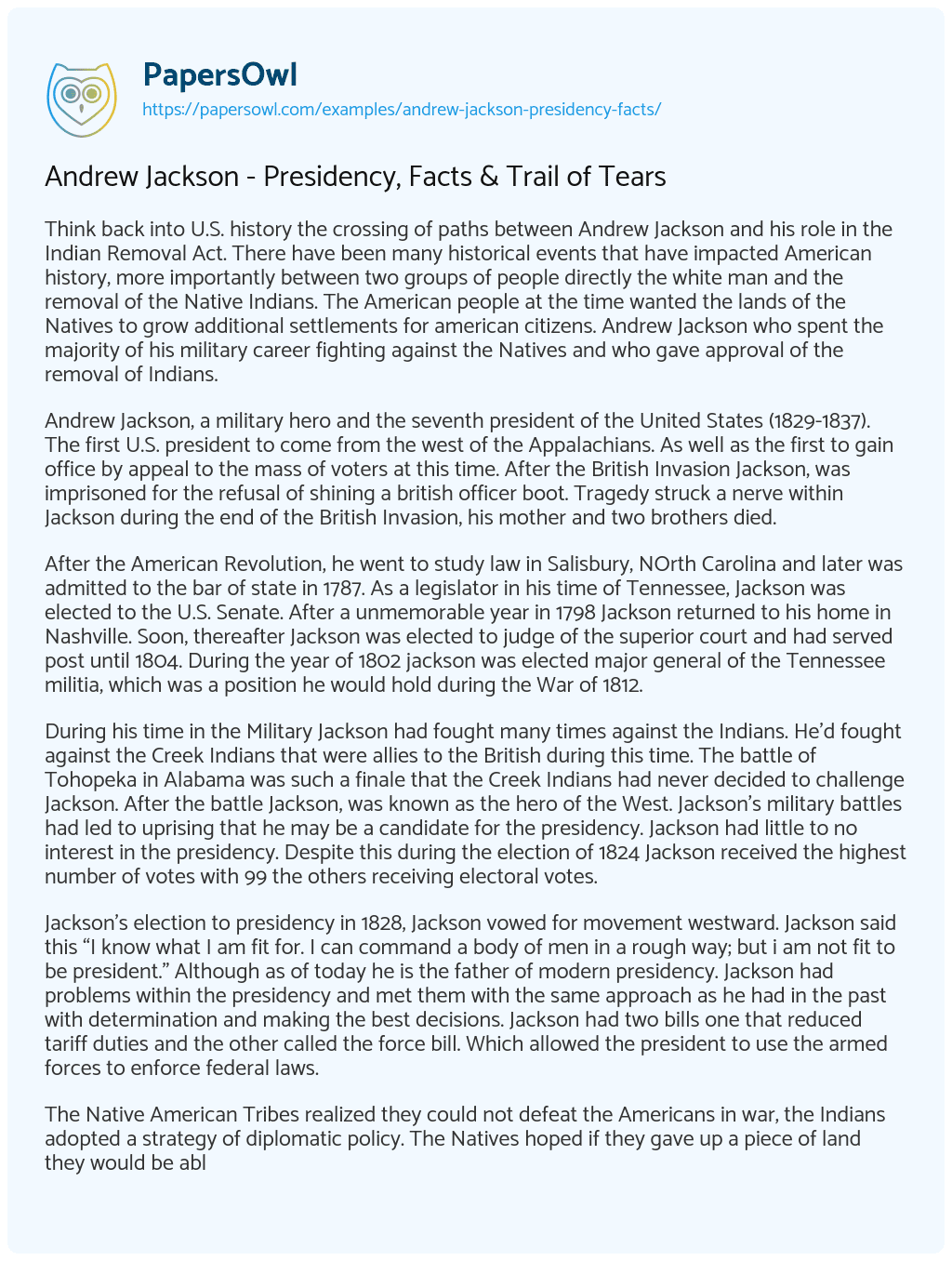 Think back into U.S. history the crossing of paths between Andrew Jackson and his role in the Indian Removal Act. There have been many historical events that have impacted American history, more importantly between two groups of people directly the white man and the removal of the Native Indians. The American people at the time wanted the lands of the Natives to grow additional settlements for american citizens. Andrew Jackson who spent the majority of his military career fighting against the Natives and who gave approval of the removal of Indians.

Andrew Jackson, a military hero and the seventh president of the United States (1829-1837). The first U.S. president to come from the west of the Appalachians. As well as the first to gain office by appeal to the mass of voters at this time. After the British Invasion Jackson, was imprisoned for the refusal of shining a british officer boot. Tragedy struck a nerve within Jackson during the end of the British Invasion, his mother and two brothers died.

After the American Revolution, he went to study law in Salisbury, NOrth Carolina and later was admitted to the bar of state in 1787. As a legislator in his time of Tennessee, Jackson was elected to the U.S. Senate. After a unmemorable year in 1798 Jackson returned to his home in Nashville. Soon, thereafter Jackson was elected to judge of the superior court and had served post until 1804. During the year of 1802 jackson was elected major general of the Tennessee militia, which was a position he would hold during the War of 1812.

During his time in the Military Jackson had fought many times against the Indians. He’d fought against the Creek Indians that were allies to the British during this time. The battle of Tohopeka in Alabama was such a finale that the Creek Indians had never decided to challenge Jackson. After the battle Jackson, was known as the hero of the West. Jackson’s military battles had led to uprising that he may be a candidate for the presidency. Jackson had little to no interest in the presidency. Despite this during the election of 1824 Jackson received the highest number of votes with 99 the others receiving electoral votes.

Jackson’s election to presidency in 1828, Jackson vowed for movement westward. Jackson said this “I know what I am fit for. I can command a body of men in a rough way; but i am not fit to be president.” Although as of today he is the father of modern presidency. Jackson had problems within the presidency and met them with the same approach as he had in the past with determination and making the best decisions. Jackson had two bills one that reduced tariff duties and the other called the force bill. Which allowed the president to use the armed forces to enforce federal laws.

The Native American Tribes realized they could not defeat the Americans in war, the Indians adopted a strategy of diplomatic policy. The Natives hoped if they gave up a piece of land they would be able to keep part of it. During the presidency of Andrew Jackson from (1829-1837), the approach was to remove Indians on legal actions. In order to achieve this Jackson had encouraged to adopt the Removal Act of 1830. With the act in place, Jackson and his followers, had the power, ability to bribe, threaten tribes into removing themselves from the Southeast.

The Cherokee Indians signed a treaty during 1835 that had them give up their land for the Indian Territory of west Arkansas. Just three years later, the Cherokees were forced to move westward on foot. The journey became known as the trail of tears. During the winter nearly a quarter of the Indians died of starvation, illness, and even exposure. The Indian Removal Act of 1830 established that Jackson to grant indian tribes western land in exchange for their homelands. The Cherokees refusal to relocate the military made sure they complied.

The statesmen that made Indian policy during the federal period were also heavily advocates for the Indian removal. With the values of the Enlightenment, Native Americans were not seen as inferior species. Congress’s Indian Removal Act of 1830 showcases the removal of the Indians that includes the Cherokees, Creeks, Choctaws, Chickasaws, and Seminoles and were forced to leave ancestral lands to relocate to that of Oklahoma. The racist attitudes toward native Americans during this time by Andrew jackson and congress shows the removal as well as their tragic fate.

The removal era had been exploited by Americans. White America has philosophically and culturally dominated and taken over people and races. The drive to be dominant regardless of the costs. The racial and political attitudes have been noted. What has yet to be examined is how the removal act destroyed the psyche of the native people, from a Native point of view. The written sources are usually by modern scholars that are almost always written by non-native people.

Government, military records, and accounts, personal journals, diaries, often reflect a white authoritarian. This even includes the speeches made by native people. All the while these are made with the intentions for white only audiences. The native perception would be important but that would mean for the Native culture to be a part of the American culture rather than being something completely separate.

The events have changed my daily life because of the fact that we have to keep moving constantly. The United States government says we are entitled to certain land but yet they turn the other way when confronted. This was a systematic genocide, on our own land. Although the Indian Removal act was controversial the law still passed through congress. The Indian tribes had nearly become extinct, the hunting grounds had become family farms, state law had replaced tribal law. The president at the time Andrew Jackson stating that” progress requires moving forward”. Which in reality is alluding to that happened then let’s move forward.

Facts about Presidency of Andrew Jackson