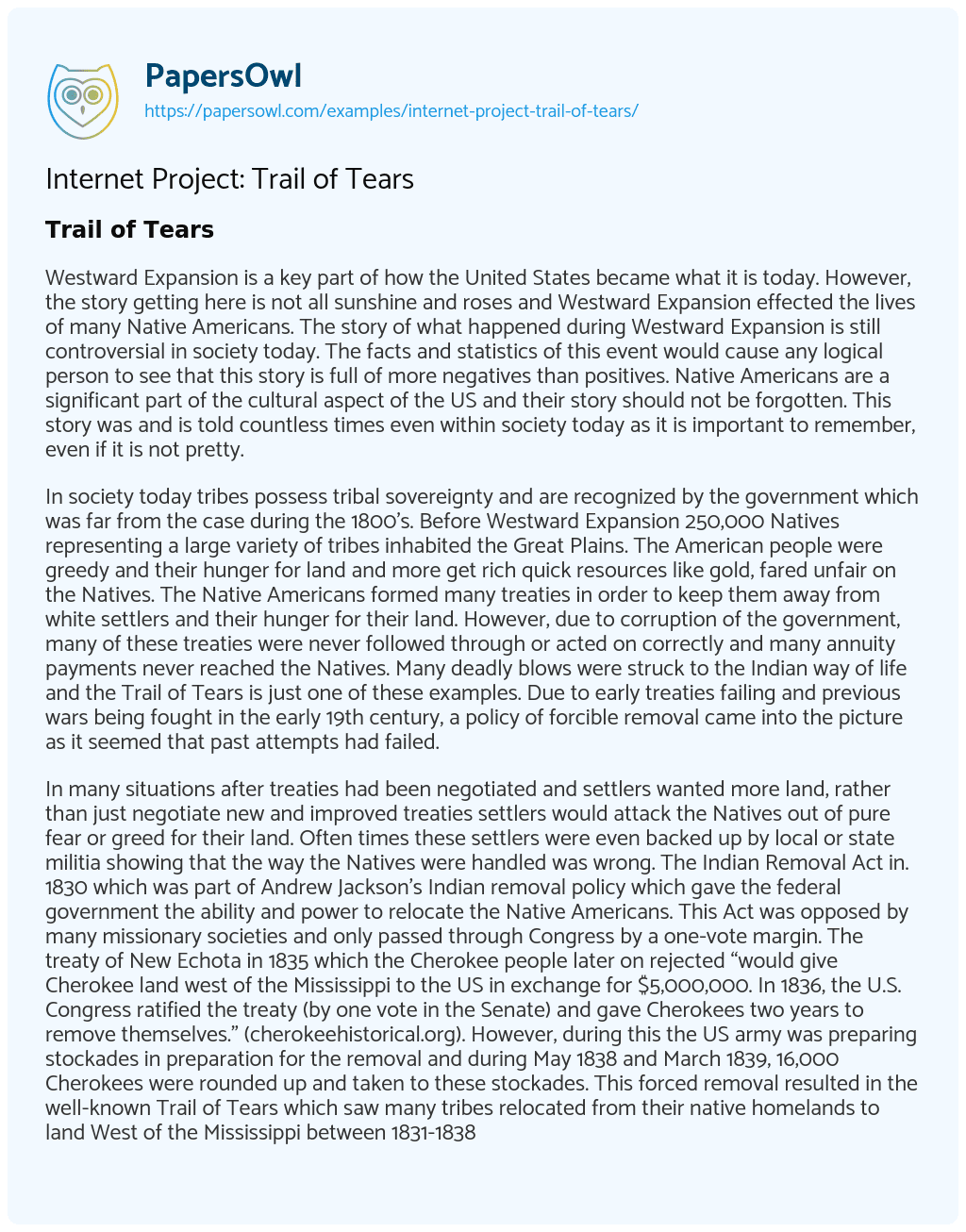 Westward Expansion is a key part of how the United States became what it is today. However, the story getting here is not all sunshine and roses and Westward Expansion effected the lives of many Native Americans. The story of what happened during Westward Expansion is still controversial in society today. The facts and statistics of this event would cause any logical person to see that this story is full of more negatives than positives. Native Americans are a significant part of the cultural aspect of the US and their story should not be forgotten. This story was and is told countless times even within society today as it is important to remember, even if it is not pretty.

In society today tribes possess tribal sovereignty and are recognized by the government which was far from the case during the 1800’s. Before Westward Expansion 250,000 Natives representing a large variety of tribes inhabited the Great Plains. The American people were greedy and their hunger for land and more get rich quick resources like gold, fared unfair on the Natives. The Native Americans formed many treaties in order to keep them away from white settlers and their hunger for their land. However, due to corruption of the government, many of these treaties were never followed through or acted on correctly and many annuity payments never reached the Natives. Many deadly blows were struck to the Indian way of life and the Trail of Tears is just one of these examples. Due to early treaties failing and previous wars being fought in the early 19th century, a policy of forcible removal came into the picture as it seemed that past attempts had failed.

In many situations after treaties had been negotiated and settlers wanted more land, rather than just negotiate new and improved treaties settlers would attack the Natives out of pure fear or greed for their land. Often times these settlers were even backed up by local or state militia showing that the way the Natives were handled was wrong. The Indian Removal Act in. 1830 which was part of Andrew Jackson’s Indian removal policy which gave the federal government the ability and power to relocate the Native Americans. This Act was opposed by many missionary societies and only passed through Congress by a one-vote margin. The treaty of New Echota in 1835 which the Cherokee people later on rejected “would give Cherokee land west of the Mississippi to the US in exchange for $5,000,000. In 1836, the U.S. Congress ratified the treaty (by one vote in the Senate) and gave Cherokees two years to remove themselves.” (cherokeehistorical.org). However, during this the US army was preparing stockades in preparation for the removal and during May 1838 and March 1839, 16,000 Cherokees were rounded up and taken to these stockades. This forced removal resulted in the well-known Trail of Tears which saw many tribes relocated from their native homelands to land West of the Mississippi between 1831-1838 to what is now known as Oklahoma territory.

“The Trail of Tears was the forced and brutal relocation of approximately 100,000 indigenous people (belonging to Cherokee, Creek, Chickasaw, Choctaw, and Seminole among other nations) living between Michigan, Louisiana, and Florida to land West of the Mississippi river” (cherokeehistorical.org). The Trail of Tears refers most specifically to Cherokee removal despite many other tribes also being relocated. The Trail of Tears got its name from the significant struggles that Natives endured on their journey. “The journey became a cultural memory as “the trail where they cried” for the Cherokees and other removed tribes” (cherokee.org). The Seminole tribe is one tribe who resisted removal with great vigor through wars costly on both the US and the Seminole’s side. Eventually, “In 1835 4,000 Seminoles were captured and were sent to the Indian territory” (nationalhumanitiescenters.org). Nearly fifty-thousand Natives traveled along this trail and sixteen-thousand were Choctaw. Of those sixteen-thousand, four-thousand Choctaw and thirty-five hundred of the fifteen-thousand plus Creeks are estimated to have died due to hunger, disease, and exposure and many who survived suffered post-removal illness and sometimes even death. The trail was neither short nor easy terrain and “today the trail encompasses about 2,200 miles of land and water routes, and traverses’ portions of nine states” (nps.gov). Tribes traveled on foot, by wagon, steamboat, horse, and railroad. Many were not even given time to grab belongings and because of this many had little or no protection against the weather.

Not including the fact that “under the orders from General Winfield Scott, the Cherokees were pushed along the trail at a merciless pace, only stopping when their “escorts” allowed it” (americanindiancoc.org). The relocation and hardships that the tribes endured had lasting long-term effects has left a lasting scar which can still be seen today. Due to the loss of life having to endure such a hard journey, many of the Indian tribes are seen being severely diminished and due to this and assimilation, the culture was and still is on the verge of extinction. The Trail of Tears took place two years after Andrew Jackson’s final term, but he is who got the ball rolling. It is possible that Andrew Jackson could have had good intentions with the removal of the Indians in order to assimilate them into American way of life and protect them despite History painting a completely different picture.

According to the quotes of Jackson, it seems as if he hoped to protect the Natives even though he saw them as heathens because he knew the effects Westward Expansion would have on their way of life and that settlers would take the Indians land either way. Despite the removal being anything but helpful to the Indians and assimilation just took away some of their cultural identity Jackson saw this as generous and hoped “to send them to land where their existence may be prolonged and perhaps made perpetual.” (ourdocuments.gov). These groups that were forced to leave their homelands defined themselves in many different unique ways but, these tribes shared a defining identity and relationship with the land they called their home and the environment they surrounded themselves with shaped their identity. The terrain of the new lands they were relocated to was different than what the tribes were used to and thus made it hard to adjust to their new “home.” The Natives had to adjust quickly, and many tribes were relocated to the new lands during harsh conditions.

Although the Natives endured many hardships, the Trail of Tears became a major part of the culture and History. The relocation of the Natives to reservations and the land in Oklahoma was the US acting slightly out of fear for the Natives race and the settlers when encountering the Natives, as well as satisfying people’s longing for land. The American settlers thought it very important that they spread their cultural views to the world and there was no exception for the Natives. However, when the settlers in a way forced their values on the Indians by sending their children to boarding school to help assimilate through education, and having the Indians participate in ceremonies such as the “last arrow” pageant that made them symbolically leave their culture behind. In doing such things including relocation the settlers believed they were helping the Indians. Even before the Trail of Tears the five tribes had made an effort to assimilate and accept the European way of life and culture. This earned the Cherokee, Choctaw, Seminole, Creek, and Chickasaw the name “The Five Civilized Tribes.”

The American settlers may have seen what they were doing to the Natives by forcibly removing tribes from their land and causing them to assimilate as helpful but, the fact of the matter shown in History when looking at the Trail of Tears and why it came about is that the hunger for land the incoming settlers possessed seemed to trump their care for spreading cultural values the right way. This was a terrible loss to the culture of the Native Americans, but they overcame and are what they are today because of the struggles they endured. Some good came from the relocation because the tribes were not fully decimated and retained their identity to last decades.