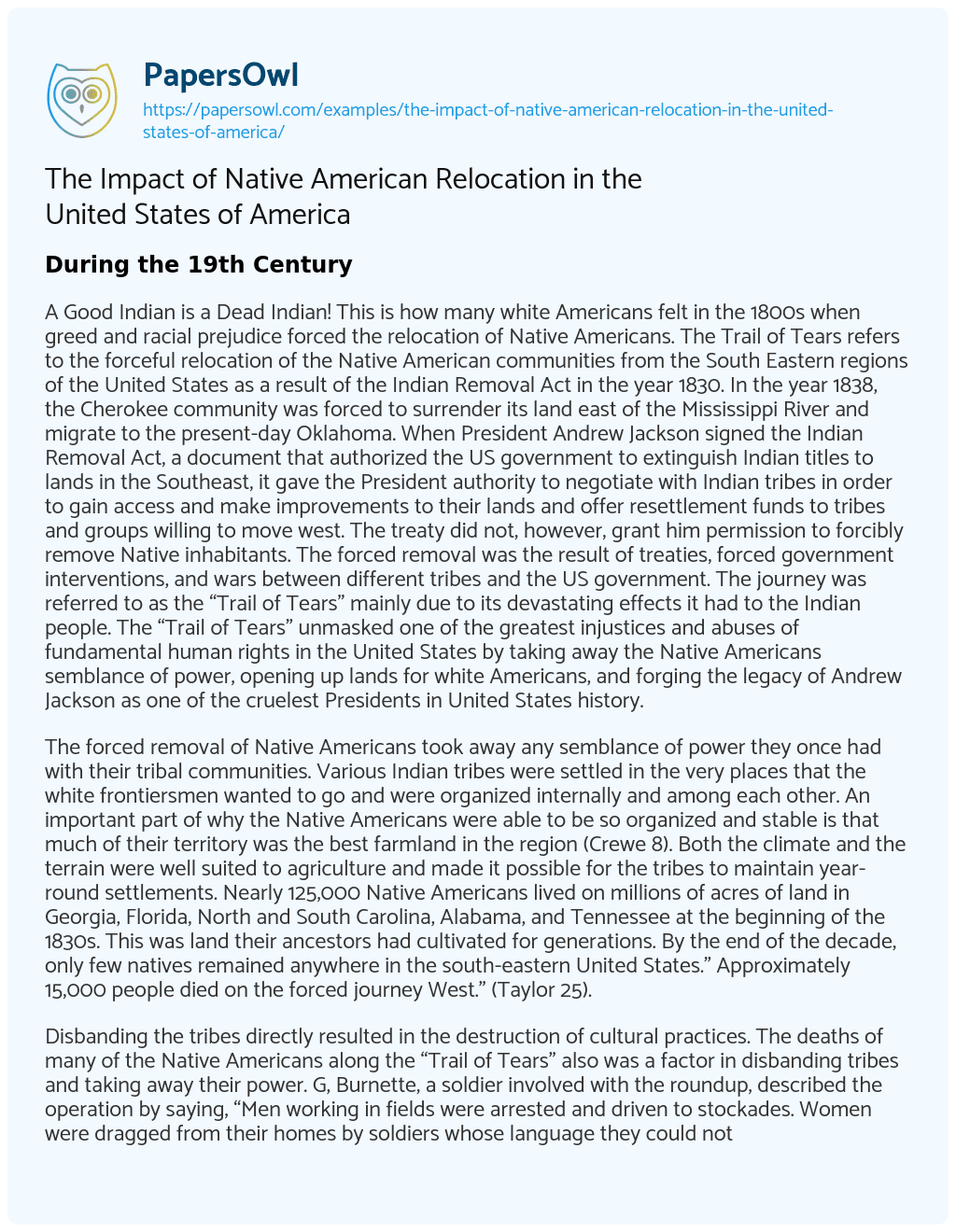 During the 19th Century

A Good Indian is a Dead Indian! This is how many white Americans felt in the 1800s when greed and racial prejudice forced the relocation of Native Americans. The Trail of Tears refers to the forceful relocation of the Native American communities from the South Eastern regions of the United States as a result of the Indian Removal Act in the year 1830. In the year 1838, the Cherokee community was forced to surrender its land east of the Mississippi River and migrate to the present-day Oklahoma. When President Andrew Jackson signed the Indian Removal Act, a document that authorized the US government to extinguish Indian titles to lands in the Southeast, it gave the President authority to negotiate with Indian tribes in order to gain access and make improvements to their lands and offer resettlement funds to tribes and groups willing to move west. The treaty did not, however, grant him permission to forcibly remove Native inhabitants. The forced removal was the result of treaties, forced government interventions, and wars between different tribes and the US government. The journey was referred to as the “Trail of Tears” mainly due to its devastating effects it had to the Indian people. The “Trail of Tears” unmasked one of the greatest injustices and abuses of fundamental human rights in the United States by taking away the Native Americans semblance of power, opening up lands for white Americans, and forging the legacy of Andrew Jackson as one of the cruelest Presidents in United States history.

The forced removal of Native Americans took away any semblance of power they once had with their tribal communities. Various Indian tribes were settled in the very places that the white frontiersmen wanted to go and were organized internally and among each other. An important part of why the Native Americans were able to be so organized and stable is that much of their territory was the best farmland in the region (Crewe 8). Both the climate and the terrain were well suited to agriculture and made it possible for the tribes to maintain year-round settlements. Nearly 125,000 Native Americans lived on millions of acres of land in Georgia, Florida, North and South Carolina, Alabama, and Tennessee at the beginning of the 1830s. This was land their ancestors had cultivated for generations. By the end of the decade, only few natives remained anywhere in the south-eastern United States.” Approximately 15,000 people died on the forced journey West.” (Taylor 25).

Disbanding the tribes directly resulted in the destruction of cultural practices. The deaths of many of the Native Americans along the “Trail of Tears” also was a factor in disbanding tribes and taking away their power. G, Burnette, a soldier involved with the roundup, described the operation by saying, “Men working in fields were arrested and driven to stockades. Women were dragged from their homes by soldiers whose language they could not understand. Children were often separated from their parents and driven to stockades with the sky for a blanket and the earth for a pillow.” (Burnett). As Burnett remembers, many were forced to walk in bare feet with only the thinnest blankets for warmth as the sleet and snow fell on them. Due to the cold and exposure, many contracted illnesses like pneumonia and died as a result. George Washington indicated that “if the United States wanted peace with the Indians, then peace must be given to them” (Washington). The United States government could not recognize Native Americans to be civilized enough to be their neighbours. As a result, Native Americans no longer had a formidable voice in negotiations with the American government and would never come close to exercising power over their destinies.

The Native Americans, now stripped of all their power, allowed white settlers the opening up of all the land east of the Mississippi River. The settlers who thought that the Native Americans were standing in the way of progress could now have the lands for grazing, farming and gold mining. The Indian tribes had made their home in the most fertile farmlands and white settlers saw these lands as great money-making opportunities for themselves. Gold had been discovered in Georgia making the Indian lands even more desirable. Not all white men agreed with the removal of the Indians from their land. Davy Crockett held an opposing view and lost his political career due to the support of the Native Americans. A letter Crockett wrote to Charles Schultz complained about President Jackson’s forced removal of the Cherokees. “I will consider that government a Paridice to what this will be. I will leave the United States for I never will live under his kingdom. Before I will submit to his government, I will go to the wildes of Texas.” (Crockett). Another government official states, “We have crowded the tribes upon a few miserable acres on our southern frontier.” (Frelinghuysen). Because the vast majority supported Jackson and his Indian Removal Act, the words of men like Crocket and Senator Frelinghuysen fell on deaf ears, and the Indian removal continued for thirty years to the financial gains of the white man.

President Andrew Jackson once thought of as a war hero has since been named one of the cruellest presidents in the history of the United States. He earned the nicknames “Sharp Knife” and “Indian Killer” as a result of the “Trail of Tears” causing the genocide of the Native American people. Jackson frequently ignored the letter of the law and forced the Native Americans to vacate their lands. Andrew Jackson had long been an advocate of what he called “Indian Removal”. In 1830, he signed the Indian Removal Act, which gave the federal government the power to exchange Native American held land in the “cotton kingdom” east of the Mississippi River for land to the west. The forced removal of the tribes started the winter of 1831 where they travelled on foot, without food and supplies. Thousands of people died along the way including Cherokee Chief John Ross’s wife. “Our hearts sickened, our utterance is paralyzed, when we reflect on the condition in which we are placed, by the audacious practices of unprincipled men” (Ross). Chief John Ross tried to legally stop the government from taking Cherokee land, but this did not happen. “Andrew Jackson had obtained two million acres himself.

Jackson owned slaves and turned a blind eye when white settlers moved in to take over Indian lands even before the signing of the Indian Removal Act.” (Manzo). Jackson’s friends also profited at the expense of the Native Americans and became leaders of the towns they colonized. “My original convictions upon this subject have been confirmed by the course of events for several years, and experience is every day adding to their strength. That those tribes cannot exist surrounded by our settlements and in continual contact with our citizens is certain. They have neither the intelligence, the industry, the moral habits, nor the desire of improvement which are essential to any favorable change in their condition. Established in the midst of another and a superior race, and without appreciating the causes of their inferiority or seeking to control them, they must necessarily yield to the force of circumstances and ere long disappear.” (Jackson). Some say that Jackson’s was only doing what was good for the United States, but without consideration of the inhumane act that followed his choices.

The United States government committed a heinous incident when it passed The Indian Removal Act resulting in “The Trail of Tears”. White Americans escaping the oppressions in Europe easily took the freedom and rights of the Indians. In 2004, Republican Senator Sam Brownback of Kansas introduced a resolution calling for a formal apology to the Cherokees and to all of the continent’s Indian tribes for past wrongs by the United States. One of the greatest injustices and abuses of fundamental human rights was unmasked by the forced relocation of Native Americans from the event known as the Trail of Tears such as Native Americans losing any semblance of power, opening up lands for white Americans, and forging the legacy of Andrew Jackson as one of the cruelest presidents in US history and it is something that the United States must never forget in order for these shameful and sad occurrences to be prevented in the future.

The Impact of Native American Relocation in the United States of America. (2021, Apr 16). Retrieved from https://papersowl.com/examples/the-impact-of-native-american-relocation-in-the-united-states-of-america/

A Lifetime of Injustice for the Native Americans under American Colonization

The 7th President of the United States