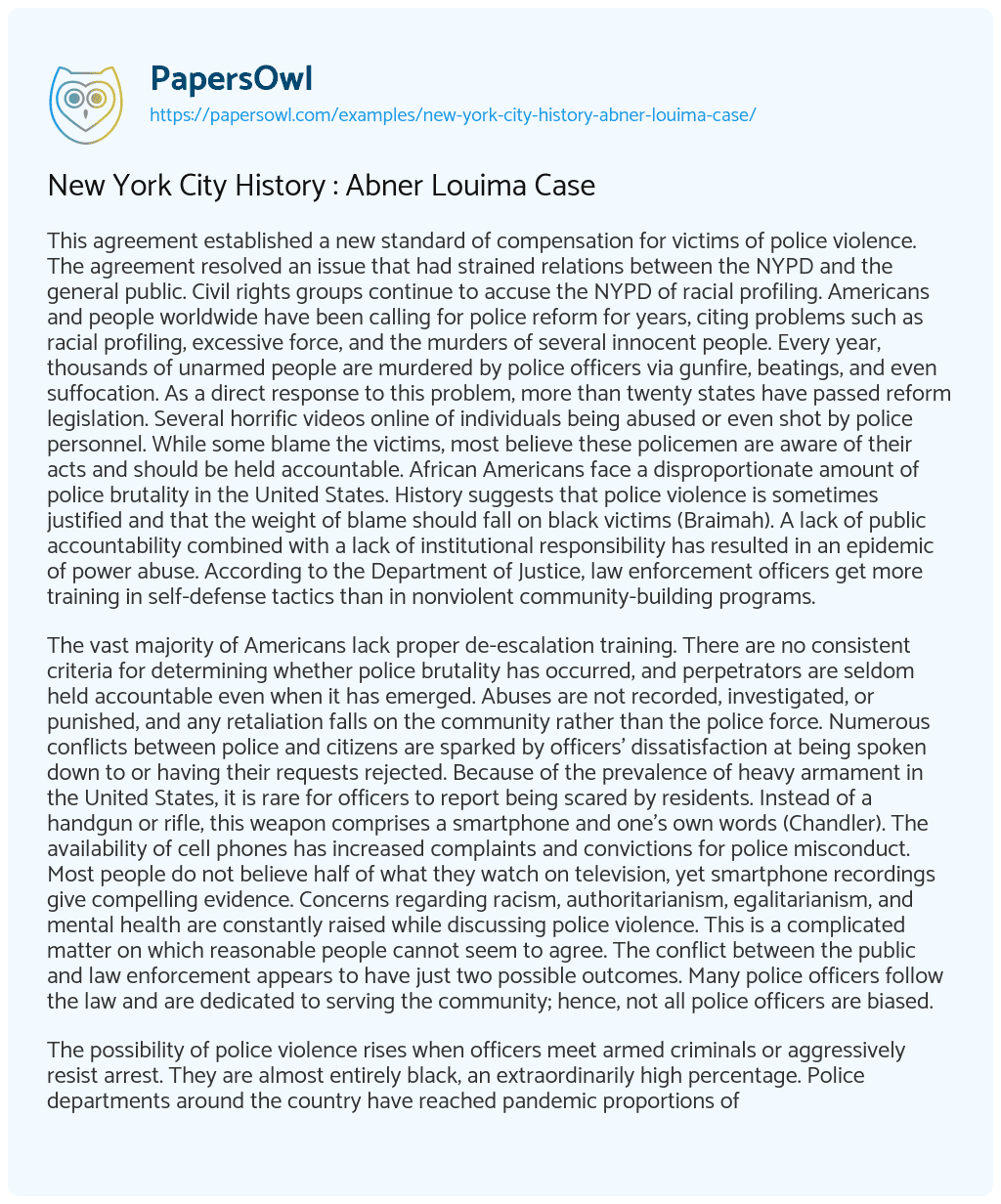 This agreement established a new standard of compensation for victims of police violence. The agreement resolved an issue that had strained relations between the NYPD and the general public. Civil rights groups continue to accuse the NYPD of racial profiling. Americans and people worldwide have been calling for police reform for years, citing problems such as racial profiling, excessive force, and the murders of several innocent people. Every year, thousands of unarmed people are murdered by police officers via gunfire, beatings, and even suffocation. As a direct response to this problem, more than twenty states have passed reform legislation. Several horrific videos online of individuals being abused or even shot by police personnel. While some blame the victims, most believe these policemen are aware of their acts and should be held accountable. African Americans face a disproportionate amount of police brutality in the United States. History suggests that police violence is sometimes justified and that the weight of blame should fall on black victims (Braimah). A lack of public accountability combined with a lack of institutional responsibility has resulted in an epidemic of power abuse. According to the Department of Justice, law enforcement officers get more training in self-defense tactics than in nonviolent community-building programs.

The vast majority of Americans lack proper de-escalation training. There are no consistent criteria for determining whether police brutality has occurred, and perpetrators are seldom held accountable even when it has emerged. Abuses are not recorded, investigated, or punished, and any retaliation falls on the community rather than the police force. Numerous conflicts between police and citizens are sparked by officers’ dissatisfaction at being spoken down to or having their requests rejected. Because of the prevalence of heavy armament in the United States, it is rare for officers to report being scared by residents. Instead of a handgun or rifle, this weapon comprises a smartphone and one’s own words (Chandler). The availability of cell phones has increased complaints and convictions for police misconduct. Most people do not believe half of what they watch on television, yet smartphone recordings give compelling evidence. Concerns regarding racism, authoritarianism, egalitarianism, and mental health are constantly raised while discussing police violence. This is a complicated matter on which reasonable people cannot seem to agree. The conflict between the public and law enforcement appears to have just two possible outcomes. Many police officers follow the law and are dedicated to serving the community; hence, not all police officers are biased.

The possibility of police violence rises when officers meet armed criminals or aggressively resist arrest. They are almost entirely black, an extraordinarily high percentage. Police departments around the country have reached pandemic proportions of coercing arrests and other behavior from individuals. Systemic improvements must be adopted to combat police misbehavior (Braimah). Officers may only use fatal force in self-defense or to avert significant bodily harm or death. Training might help to lower the worrying rates of police brutality against minorities, which are partly related to internal prejudice. De-escalation training is one method of reducing police brutality toward individuals. Police would devise non-lethal options if they learned how to slow down and lower the intensity of a crisis. This method is lifesaving when dealing with persons who may have trouble obeying police directions due to language challenges, cognitive impairments, or other factors. We must hold police personnel responsible for any injuries or deaths they cause to unarmed individuals, in addition to upgrading their training.

Despite the vast number of victims of police violence who have been documented on video, a conviction remains elusive. A sentence requires more than just video proof; official charges must first be filed. Prosecutors may face pressure not to pursue charges against police officers they know and trust, and judges and juries may be hesitant to penalize police officers. You can make a difference without becoming a prosecutor, politician, judge, or police commander. Working with one’s local police department and being acquainted with its policies about using force is one technique for effecting change. The deployment of body cameras by police officers has been suggested to reduce police brutality. Police brutality, racial profiling, and power abuse may be prevented if officers are required to keep video and audio recordings of their encounters with the public (Chan). They will also ensure that everyone involved in a police inquiry is held responsible for their conduct and that “he said, she said” arguments are avoided. There are certain drawbacks to this novel approach to law enforcement.

Some people are concerned that body cameras may invade people’s privacy in locations where they have no right to expect it, such as their homes, places of business, public toilets, and locker rooms. Innocent bystanders may be recorded on video during police activities (Chandler). Even if you were never formally charged or convicted of a crime, a video of your arrest might be placed in public records. A trusting connection between police and citizens is another way to reduce police violence. Law officials should be able to connect with residents to gain their confidence and reduce public hostility against the police. Community members should trust and respect individuals in positions of authority. “Community policing” aims to increase public confidence in law enforcement. Instead of focusing only on law enforcement, community policing seeks to build connections within the community and find long-term solutions to issues (David).

Officers take a more proactive approach in community policing programs, building relationships with the public and collaborating closely with them. It would help if you worked hard as a public servant to win the respect of your community. Community policing should be prioritized throughout all divisions. There is no need in society for a “we against them” mindset, whether you are an officer or not. The role of the police in the community is critical. It comprises riding a bicycle around the neighborhood and striking up conversations with residents while they work in their yards or care for the elderly. When you are friendly to people, you help the police and the community now while also benefiting future generations in the long run. How we treat one another now will have ramifications for decades. It is possible that if one adopts a more optimistic viewpoint, one’s impression of law enforcement will alter. Local law enforcement should start here.

Corruption may have varying degrees of impact on all levels of law enforcement. However, we cannot generalize a few officers’ behaviors to the whole force. Furthermore, we cannot assume that all law enforcement agents are moral (Chandler). This officer of the law must be dealt with personally, not collectively. A resurgence of social accountability for one’s actions is also essential. The public has preconceived notions about how police officers should behave due to media portrayals. According to this research, anybody pursuing a job in law enforcement should have strong moral views and ethical ideals. Despite the best attempts, police brutality still occurs on occasion. However, by maintaining a high ethical standard, not only may police misbehavior be reduced, but public faith in the police can be strengthened, adding to the safety and tranquillity of our communities.

More than two decades have passed since the Abner Louima tragedy sparked demonstrations, police reform, and strained relationships between communities and law enforcement. Many people have never heard of Abner Louima or are ignorant that he was involved in a tragic event. This trial was a watershed moment in New York City’s history. Louima has built a successful real estate career in Miami Beach, Florida, where he lives with his wife and three children. He has now utilized a portion of his settlement money to establish a foundation that constructs clinics and gives financial aid to students in Haiti’s economically stricken native country. As part of the minister’s crusade to end police brutality, Abner Louima has joined Rev. Al Sharpton in condemning it (Braimah). He is now an example to those who have been victims of police violence due to his resilience in the face of adversity. Abner Louima feels that by sharing his story, he would highlight the necessity of forgiveness and the folly of generalizing about the whole police force based on a single incident.