The Treaty of Indian New Echota 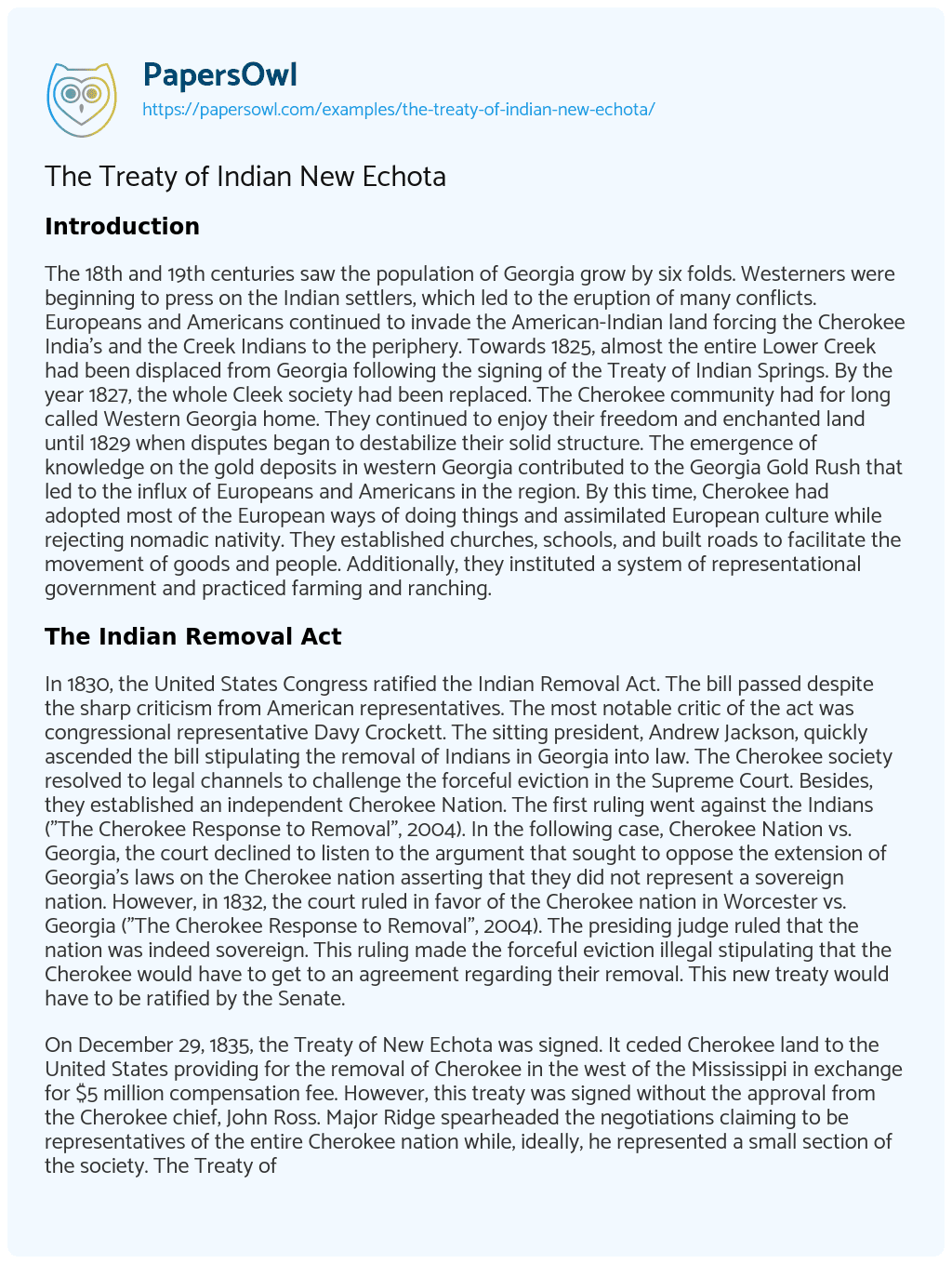 The 18th and 19th centuries saw the population of Georgia grow by six folds. Westerners were beginning to press on the Indian settlers, which led to the eruption of many conflicts. Europeans and Americans continued to invade the American-Indian land forcing the Cherokee India’s and the Creek Indians to the periphery. Towards 1825, almost the entire Lower Creek had been displaced from Georgia following the signing of the Treaty of Indian Springs. By the year 1827, the whole Cleek society had been replaced. The Cherokee community had for long called Western Georgia home. They continued to enjoy their freedom and enchanted land until 1829 when disputes began to destabilize their solid structure. The emergence of knowledge on the gold deposits in western Georgia contributed to the Georgia Gold Rush that led to the influx of Europeans and Americans in the region. By this time, Cherokee had adopted most of the European ways of doing things and assimilated European culture while rejecting nomadic nativity. They established churches, schools, and built roads to facilitate the movement of goods and people. Additionally, they instituted a system of representational government and practiced farming and ranching.

In 1830, the United States Congress ratified the Indian Removal Act. The bill passed despite the sharp criticism from American representatives. The most notable critic of the act was congressional representative Davy Crockett. The sitting president, Andrew Jackson, quickly ascended the bill stipulating the removal of Indians in Georgia into law. The Cherokee society resolved to legal channels to challenge the forceful eviction in the Supreme Court. Besides, they established an independent Cherokee Nation. The first ruling went against the Indians (“The Cherokee Response to Removal”, 2004). In the following case, Cherokee Nation vs. Georgia, the court declined to listen to the argument that sought to oppose the extension of Georgia’s laws on the Cherokee nation asserting that they did not represent a sovereign nation. However, in 1832, the court ruled in favor of the Cherokee nation in Worcester vs. Georgia (“The Cherokee Response to Removal”, 2004). The presiding judge ruled that the nation was indeed sovereign. This ruling made the forceful eviction illegal stipulating that the Cherokee would have to get to an agreement regarding their removal. This new treaty would have to be ratified by the Senate.

On December 29, 1835, the Treaty of New Echota was signed. It ceded Cherokee land to the United States providing for the removal of Cherokee in the west of the Mississippi in exchange for $5 million compensation fee. However, this treaty was signed without the approval from the Cherokee chief, John Ross. Major Ridge spearheaded the negotiations claiming to be representatives of the entire Cherokee nation while, ideally, he represented a small section of the society. The Treaty of New Echota signed by Ridge and some members of the Treaty Party gave legal authority to the president to activate the removal of Cherokee from Georgia. The president issued a removal directive to the army general, John Wool, who protested the command in a somewhat resigned way; delayed the action prompting his removal and replacement with General Winfield Scott (“An 1837 message from Brigadier General John E. Wool to the Cherokee Nation warning them of the consequences of resisting removal. | DPLA”, n.d.). Scott with his army of 7,000 men began to invade the Cherokee nation in the summer in 1838.

The Aftermath: The Trail of Tears

The Trail of Tears highlights the forceful relocation of Eastern Woodlands Indians of the Southeast region of the United States to the Indian Territory that was in the west of Mississippi river during the 1830s. The woodland Indians comprised of Cherokee, Creek, Chickasaw, Choctaw, and Seminole Indians. The phrase, Trail of Tears symbolizes the horrible experiences the evictees, especially Cherokee, endured during the removal experience (Vipperman, 1989). The trail itself comprises of several overland routes and one main water route across nine states namely Alabama, Georgia, Kansas, North Carolina, Oklahoma, Illinois, Kentucky, Missouri, and Tennessee. The roots of the mass eviction lay in the greed of Europeans. In 1793, the British proclaimed the region between the Mississippi River and the Appalachian Mountains as Indian Territory. Although initially, indigenous groups occupied the land, Europeans and Americans began to trespass and encroached on the Indian Territory.

In 1829, a gold rush swept across the Cherokee land in Georgia placing large amounts of wealth at stake. The discovery of gold in the region saw the influx of Euro-Americans in the Indian Territory. Land speculators that comprised mainly of affluent settlers began to agitate the Congress to devolve all control for real property owned by tribes and their members to states. President Andrew Jackson, an avid spectator, supported the claims of fellow Americans and European settlers. This agitation compelled the Congress to comply by introducing and ratifying the Indian Removal Act. The introduction of the act forced the president into negotiations with eastern nations about the relocation of the woodland Indians to the west of Mississippi. The deliberations resolved that resources would be spared to facilitate migration and compensation of American Indians in Georgia.

By the year 1836, the government was finalizing the migration of at least 15,000 Creeks, among whom approximately 3,500 did not make it to Oklahoma (Vipperman, 1989). By this time, the Cherokee were in a dilemma on how to approach the government’s pursuit to occupy their territory. Some thought that staying and fighting for their fair share was the best thing. Another faction felt it was futile to challenge the federal authority and thought it was pragmatic enough to leave in exchange for money and other compensations. In 1835, a few self-appointed representatives of the Cherokee society led by Major Ridge entered the negotiations of the Treaty of New Echota, which ceded all Cherokee land on the east of Mississippi for $5 million, compensation for lost property, and assistance to relocate. Majority of the Cherokee Nation felt betrayed because the self-proclaimed representatives did not represent the interests of the entire community (“[Copy of New Echota] Treaty [between] the Cherokees [and the] United States, 1835 | DPLA”, n.d.). John Ross petitioned the authorities in a letter to the U.S. Senate claiming that the society was not a party to any of the covenants in the treaty. Almost all Cherokees signed the John Ross petition. However, congress ignored the appeal and approved the agreement. About 2,000 Cherokees voluntarily left their native homeland in Georgia to settle in the Indian Territory by 1838. The two-year grace period had elapsed, and President Martin Van Buren sent an army of 7,000 men led by General Scott to oversee the eviction and migration of Cherokee while White settlers grabbed their land and looted their property. This eviction became the onset of the 1,200 miles journey to the Indian Territory. Conditions such as whooping cough, dysentery, typhoid, starvation, cholera among other epidemics struck the Cherokee population during the journey leading to the death of almost 6,000 Cherokees (Vipperman, 1989).

The forceful eviction of American Indians from their native land and the horrible accounts of the Trail of Tears largely contradicted the premises upon which the great nation of America was formed. The ideal holds that all men are created equal and that their creator endows them with exclusive unalienable rights, among them, right to life, freedom, and the pursuit of happiness. Through the forceful migration and the treacherous journey, America brutally closed the curtains on such a distinct and innocent culture. To date, there is no more significant symbol that captures the pain and suffering of the trail where Cherokees cried. Following the annihilating conditions and the sorrowful cries of Cherokee mother, their chiefs prayed for a sign to lift the mothers’ spirits and encourage them to take care of their children. Since that day, a mother’s tear that fell on the ground formed a beautiful new white rose flower with a gold center that resembles the gold taken from Cherokee land and seven leaves on each stem to represent the seven Cherokee clans that endured the journey on the Trail of Tears. Up to date, the Cherokee rose is the official flower of the state of Georgia.

The Treaty of Indian New Echota. (2021, May 10). Retrieved from https://papersowl.com/examples/the-treaty-of-indian-new-echota/

The Trail where they Cried