What is Feminism: Meaning, History 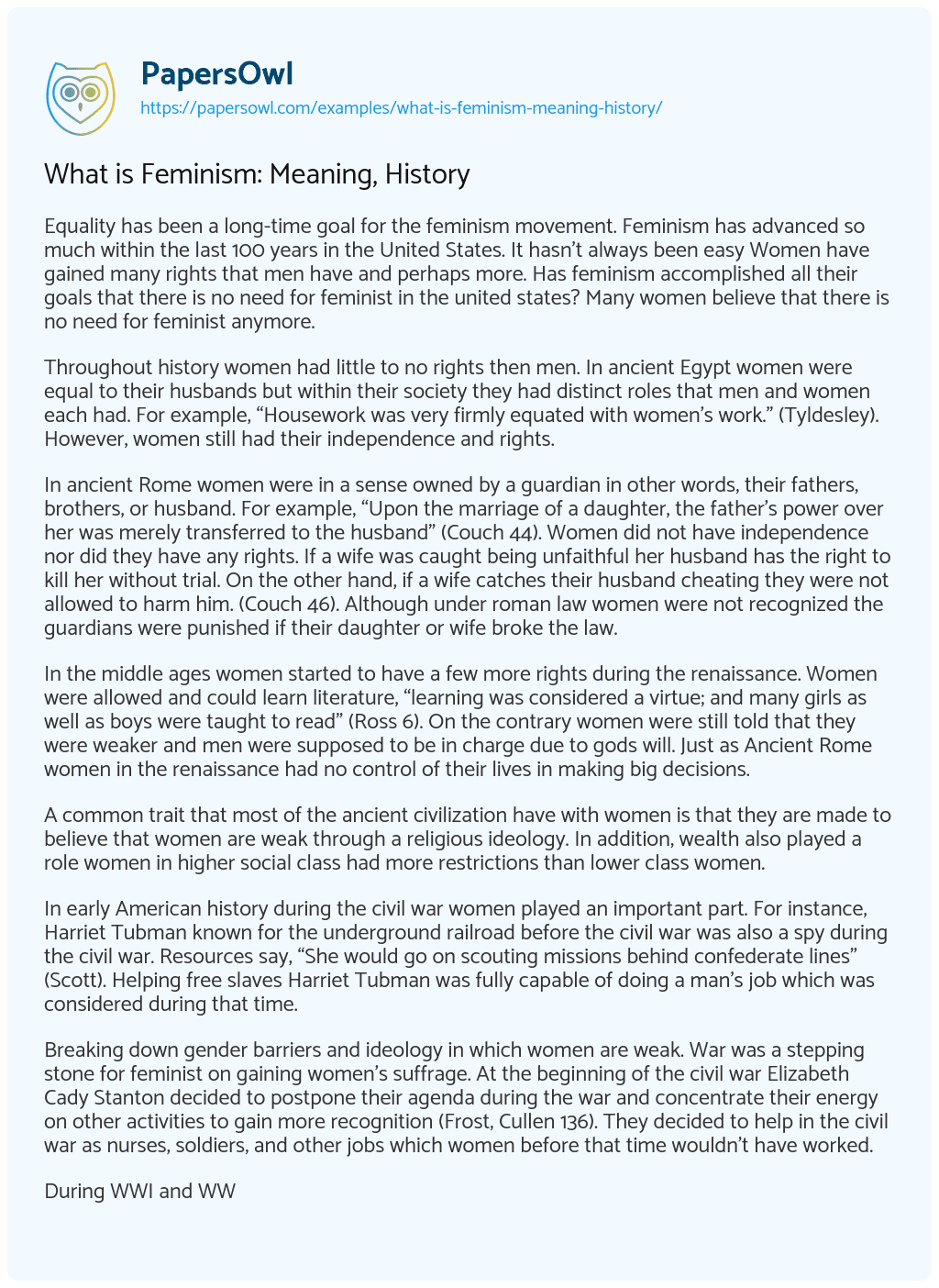 Equality has been a long-time goal for the feminism movement. Feminism has advanced so much within the last 100 years in the United States. It hasn’t always been easy Women have gained many rights that men have and perhaps more. Has feminism accomplished all their goals that there is no need for feminist in the united states? Many women believe that there is no need for feminist anymore.

Throughout history women had little to no rights then men. In ancient Egypt women were equal to their husbands but within their society they had distinct roles that men and women each had. For example, “Housework was very firmly equated with women’s work.” (Tyldesley). However, women still had their independence and rights.

In ancient Rome women were in a sense owned by a guardian in other words, their fathers, brothers, or husband. For example, “Upon the marriage of a daughter, the father’s power over her was merely transferred to the husband” (Couch 44). Women did not have independence nor did they have any rights. If a wife was caught being unfaithful her husband has the right to kill her without trial. On the other hand, if a wife catches their husband cheating they were not allowed to harm him. (Couch 46). Although under roman law women were not recognized the guardians were punished if their daughter or wife broke the law.

In the middle ages women started to have a few more rights during the renaissance. Women were allowed and could learn literature, “learning was considered a virtue; and many girls as well as boys were taught to read” (Ross 6). On the contrary women were still told that they were weaker and men were supposed to be in charge due to gods will. Just as Ancient Rome women in the renaissance had no control of their lives in making big decisions.

A common trait that most of the ancient civilization have with women is that they are made to believe that women are weak through a religious ideology. In addition, wealth also played a role women in higher social class had more restrictions than lower class women.

Breaking down gender barriers and ideology in which women are weak. War was a stepping stone for feminist on gaining women’s suffrage. At the beginning of the civil war Elizabeth Cady Stanton decided to postpone their agenda during the war and concentrate their energy on other activities to gain more recognition (Frost, Cullen 136). They decided to help in the civil war as nurses, soldiers, and other jobs which women before that time wouldn’t have worked.

During WWI and WWII, it was not uncommon to see women work in areas that were considered a man’s job. In fact, it was encouraged through a slogan and women were making one-third of the work force (“The American Experience In World War II” 279). It received both positive and negative feedback from women. Some women found it liberating from gender segregation. On the other hand, women who were not used to working or getting dirty disliked it.

In the year 1920, feminist succeeded in achieving the right to vote. The 19th amendment granted any citizen to vote of either sex. The right to vote gave women and feminist to change the country for equality.

In present time, feminist goals from the 19th century the right to vote, equal pay, and equal rights have been accomplished. Feminism is the advocacy of women’s political, economic, and social equality of the sexes (“Merriam-Webster”). In the united states, there is no need for feminist.

Women can freely choose any job and get paid equally if not even more than men. For example, “There are 80 jobs in which women earn more than men – position like financial analyst, speech-language pathologist, radiation therapist, library worker, biological technician, motion picture projectionist” (Farrell). The wage gap does not take in consideration the difference of positions within a job. The total hours worked and the different jobs in which most women do not find appealing such as a garbage collector.

Equality has achieved for women but the failure to see that slowly men are starting to be unequal socially. There have been many men in the united states wrongly accused of rape and even if they are simply accused society men are immediately persecuted. For instance, Daryl Kelly was sent to jail due to his wife coercing their daughter of being raped by Daryl. It didn’t take much to convince police either, “with both Chaneya and her mom telling police the same story, it was enough for police” (“NBCNews.com”). Zach Anderson a 19yr old teenage boy was sent to jail and registered as a sex offender due to a girl lying about her age online and told Zach she was 17yrs old. Although both the girl and the mom believed that Zach shouldn’t be registered as a sex offender. “It is not a defense under current sex offender laws” (Phillips). There are many cases in which women have caused men to be jailed falsely.

Today men have certain roles within society and are expected to act a certain way. Nora Vincent is a woman that disguised herself as a man for a year. She has learned that men and women are both facing scrutiny. She stated, “I had thought that by being a guy I would get to do all the things I didn’t get to do as a woman, things I’d always envied about boyhood when I was a child: the perceived freedoms of being unafraid in the word, stamping around loudly with my legs apart” (8). At the end of her journey of being a man she was proud and glad to be a woman.

There are several countries around the world in which women are still oppressed. Not having the freedoms women have in the united states. Women in Saudi Arabia are still being treated the same way women were treated during ancient times. They are considered property of man being either their father, brother, or husband. Also, women are “dependent on him for everything: money, housing, and, because the driving ban means she needs a driver to go anywhere, even the ability to go to the store or visit a friend” (Fisher). Although recently women were given the right to vote in an election which is the beginning to change however most still oppress women politically.

Yemen is another country in which women are oppressed young girls are sold off to marry men, are forced to act a certain way, and required to cover their body without showing any skin. In Yemen, “women were almost invisible and had no say in what went on in their country” (Khalil). The ability for women to drive without having to ask permission from their husband or father, speaking freely in public and politically without being punished, able to work in any position of their choosing and not forced into a job area, and many more rights women do not have in other countries.

In conclusion, feminism has reached its peak in the united states. Women have gained the rights that were lacking during the 19th century. Rape culture is frowned upon in the united states and a simple accusation will affect a person’s life whether being falsely imprisoned, rapist is persecuted from society and are forced to register on a sex offender list. Other countries forbid women to go see a doctor, police, or a friend without the permission of their husband.

The pay gap does not consider many variables such as hours worked, work position, and experience. Women in oppressed countries can work with the permission of their guardian to work and attend work. If approved they are paid unfairly or not at all.

Today the united states need equality especially with the rise of new groups such as the LGBT community. There are areas in which feminism does not apply in these groups. This does not mean the end for feminist but it could be the beginning of changing their agenda and concentrating on other countries of oppressed women to shine light in areas that can be improved within the united states and bring awareness of other countries that need to improvement.

What is Feminism: Meaning, History. (2021, May 10). Retrieved from https://papersowl.com/examples/what-is-feminism-meaning-history/