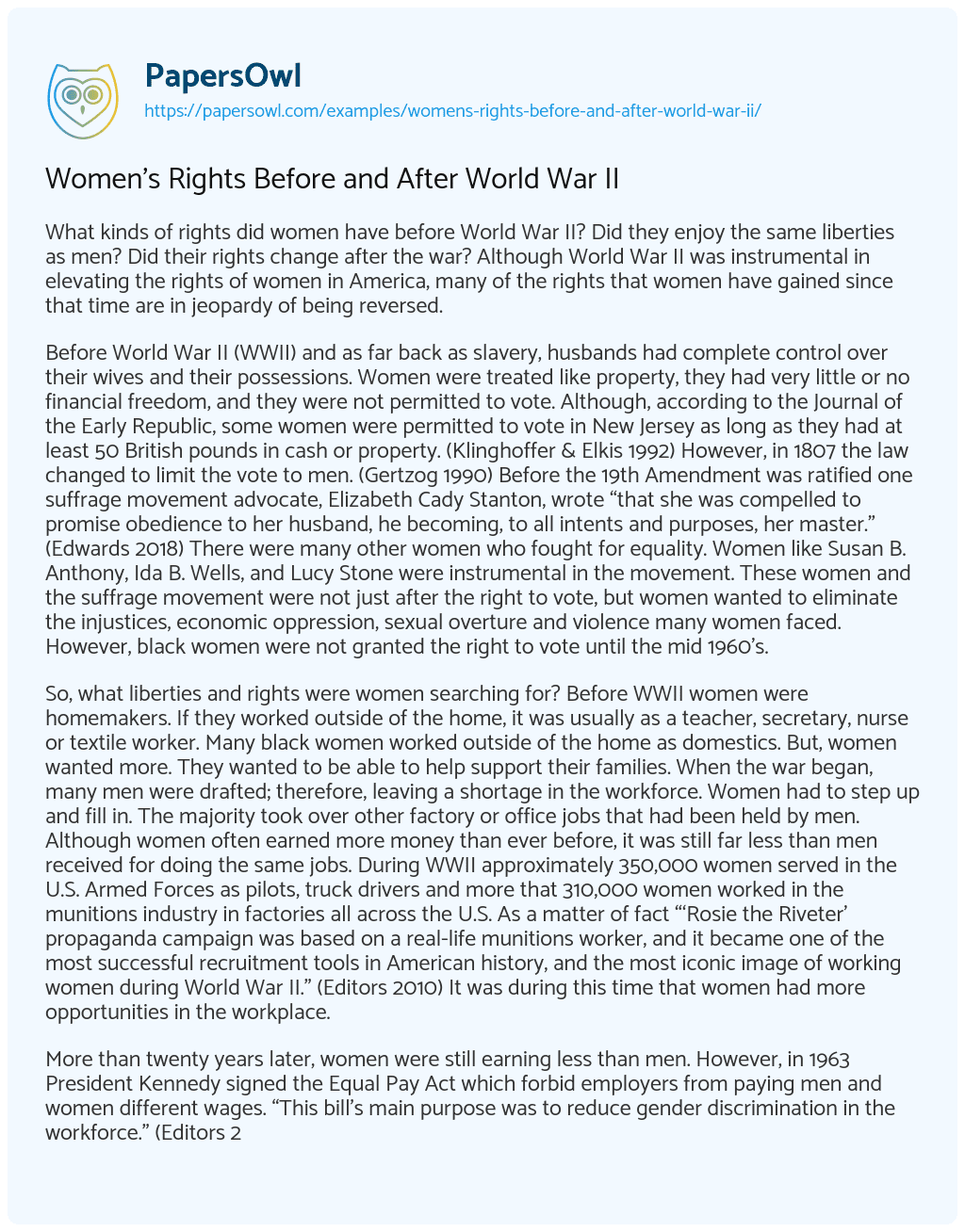 What kinds of rights did women have before World War II? Did they enjoy the same liberties as men? Did their rights change after the war? Although World War II was instrumental in elevating the rights of women in America, many of the rights that women have gained since that time are in jeopardy of being reversed.

Before World War II (WWII) and as far back as slavery, husbands had complete control over their wives and their possessions. Women were treated like property, they had very little or no financial freedom, and they were not permitted to vote. Although, according to the Journal of the Early Republic, some women were permitted to vote in New Jersey as long as they had at least 50 British pounds in cash or property. (Klinghoffer & Elkis 1992) However, in 1807 the law changed to limit the vote to men. (Gertzog 1990) Before the 19th Amendment was ratified one suffrage movement advocate, Elizabeth Cady Stanton, wrote “that she was compelled to promise obedience to her husband, he becoming, to all intents and purposes, her master.” (Edwards 2018) There were many other women who fought for equality. Women like Susan B. Anthony, Ida B. Wells, and Lucy Stone were instrumental in the movement. These women and the suffrage movement were not just after the right to vote, but women wanted to eliminate the injustices, economic oppression, sexual overture and violence many women faced. However, black women were not granted the right to vote until the mid 1960’s.

So, what liberties and rights were women searching for? Before WWII women were homemakers. If they worked outside of the home, it was usually as a teacher, secretary, nurse or textile worker. Many black women worked outside of the home as domestics. But, women wanted more. They wanted to be able to help support their families. When the war began, many men were drafted; therefore, leaving a shortage in the workforce. Women had to step up and fill in. The majority took over other factory or office jobs that had been held by men. Although women often earned more money than ever before, it was still far less than men received for doing the same jobs. During WWII approximately 350,000 women served in the U.S. Armed Forces as pilots, truck drivers and more that 310,000 women worked in the munitions industry in factories all across the U.S. As a matter of fact “‘Rosie the Riveter’ propaganda campaign was based on a real-life munitions worker, and it became one of the most successful recruitment tools in American history, and the most iconic image of working women during World War II.” (Editors 2010) It was during this time that women had more opportunities in the workplace.

More than twenty years later, women were still earning less than men. However, in 1963 President Kennedy signed the Equal Pay Act which forbid employers from paying men and women different wages. “This bill’s main purpose was to reduce gender discrimination in the workforce.” (Editors 2017). Then the following year The Civil Rights Act of 1964 was signed into law making it illegal to discriminate against African Americans and “people of color”. (Editors 2017)

Today, women’s rights are once again in jeopardy of being taken away. The five major rights that are in jeopardy are: Reproductive Choice, Sexual Harassment At Work, Equal Pay, Domestic Violence and Women’s Health. (Thorpe 2018) Women’s Rights have made tremendous strides through the decades. Women were no longer treated like property or inferior citizens. Women were able to work outside of their homes.

Women’s Rights Before and After World War II. (2021, Mar 09). Retrieved from https://papersowl.com/examples/womens-rights-before-and-after-world-war-ii/

Women Rights in all Countries