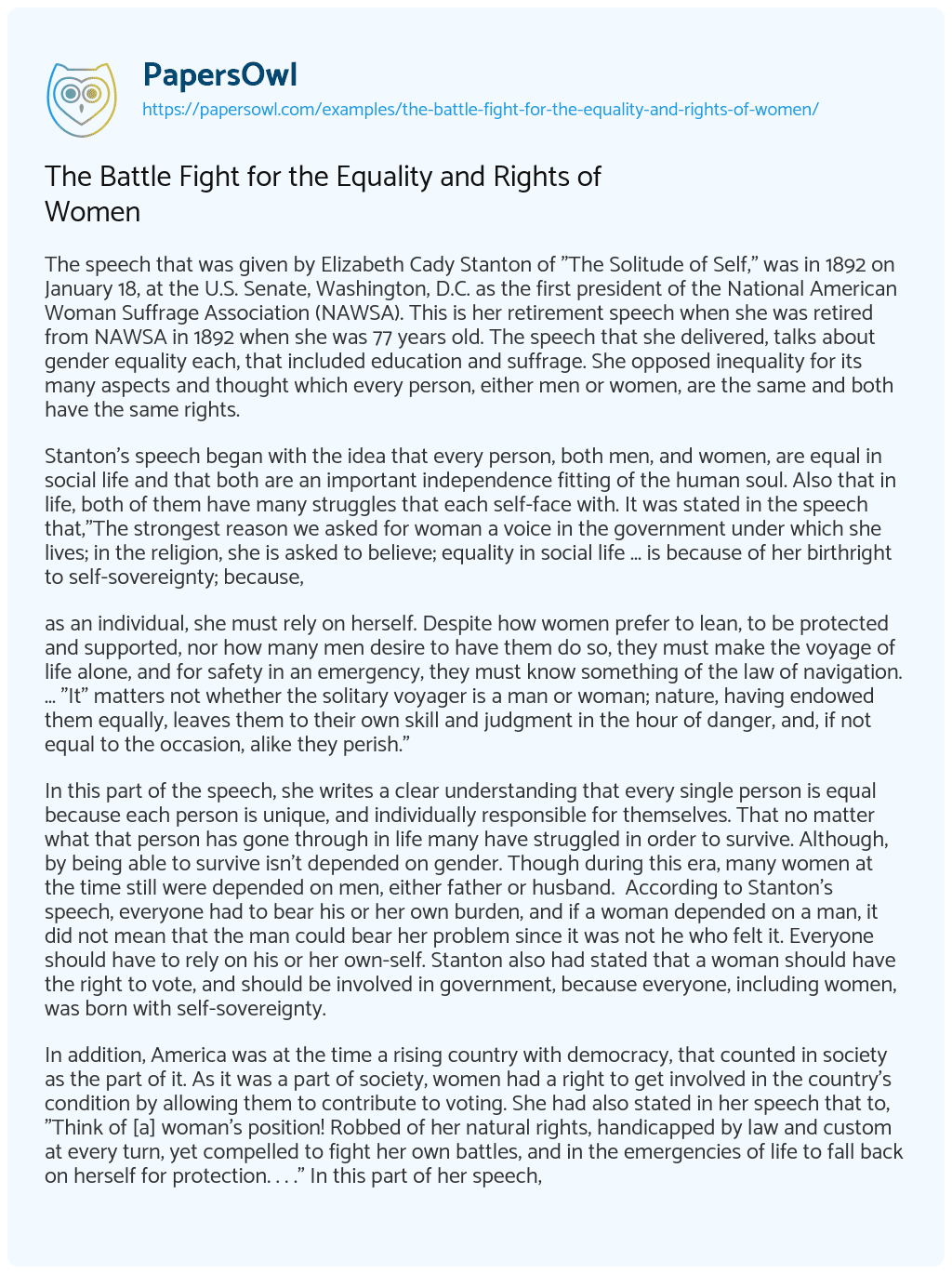 The speech that was given by Elizabeth Cady Stanton of “The Solitude of Self,” was in 1892 on January 18, at the U.S. Senate, Washington, D.C. as the first president of the National American Woman Suffrage Association (NAWSA). This is her retirement speech when she was retired from NAWSA in 1892 when she was 77 years old. The speech that she delivered, talks about gender equality each, that included education and suffrage. She opposed inequality for its many aspects and thought which every person, either men or women, are the same and both have the same rights.

Stanton’s speech began with the idea that every person, both men, and women, are equal in social life and that both are an important independence fitting of the human soul. Also that in life, both of them have many struggles that each self-face with. It was stated in the speech that,”The strongest reason we asked for woman a voice in the government under which she lives; in the religion, she is asked to believe; equality in social life … is because of her birthright to self-sovereignty; because,

as an individual, she must rely on herself. Despite how women prefer to lean, to be protected and supported, nor how many men desire to have them do so, they must make the voyage of life alone, and for safety in an emergency, they must know something of the law of navigation. … “It” matters not whether the solitary voyager is a man or woman; nature, having endowed them equally, leaves them to their own skill and judgment in the hour of danger, and, if not equal to the occasion, alike they perish.”

In this part of the speech, she writes a clear understanding that every single person is equal because each person is unique, and individually responsible for themselves. That no matter what that person has gone through in life many have struggled in order to survive. Although, by being able to survive isn’t depended on gender. Though during this era, many women at the time still were depended on men, either father or husband.  According to Stanton’s speech, everyone had to bear his or her own burden, and if a woman depended on a man, it did not mean that the man could bear her problem since it was not he who felt it. Everyone should have to rely on his or her own-self. Stanton also had stated that a woman should have the right to vote, and should be involved in government, because everyone, including women, was born with self-sovereignty.

In addition, America was at the time a rising country with democracy, that counted in society as the part of it. As it was a part of society, women had a right to get involved in the country’s condition by allowing them to contribute to voting. She had also stated in her speech that to, “Think of [a] woman’s position! Robbed of her natural rights, handicapped by law and custom at every turn, yet compelled to fight her own battles, and in the emergencies of life to fall back on herself for protection. . . .” In this part of her speech, she was criticizing education, as it was a tool to defeat life’s problem, and that everyone deserved to survive in life. Also speaking about women’s right for education was taken into account and consideration, it was made so that women couldn’t have the same degree of education as a man did, although in real life they encountered the same problem. As a result, a woman had to fight their own way and have their own protection. Through Stanton’s speech, she emphasized the suffering that woman faced by using offensive words, such as robbed, handicapped, and compelled. It makes the listener more aware of education significance for the women.

Stanton was one of the first presidents of an association that fought for women’s rights, and her retirement speech was a final attempt to make women and men in America equal. Her speech could have been a strong persuasion that changed the minds of many because it was presented in front of the House Committee on the Judiciary and the Senate Committee for Woman Suffrage in which had men in them. Stanton had hoped that her speech was able to bring a change in women’s lives. Although, shortly later she passed away without seeing the effects of her speech had done in the all-woman movement that finally gave women the right to vote. This act was added to the U.S. Constitution as the 19th amendment in 1920 that gave the right that any American person born in the U.S. could be able to vote.

The Battle Fight for the Equality and Rights of Women. (2019, Aug 13). Retrieved from https://papersowl.com/examples/the-battle-fight-for-the-equality-and-rights-of-women/

Fight for Equality between Men and Women

About Women Rights and Equality