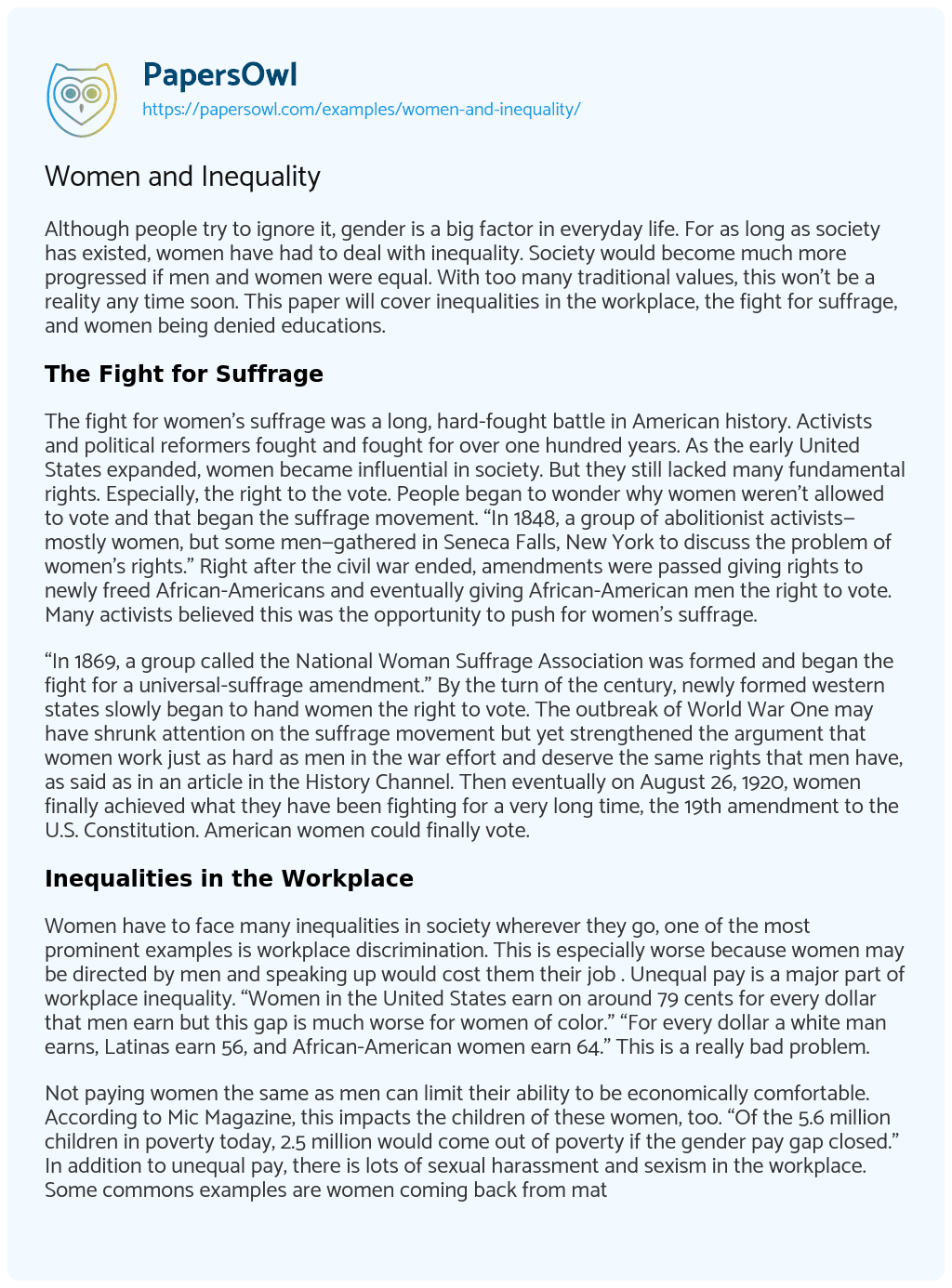 Although people try to ignore it, gender is a big factor in everyday life. For as long as society has existed, women have had to deal with inequality. Society would become much more progressed if men and women were equal. With too many traditional values, this won’t be a reality any time soon. This paper will cover inequalities in the workplace, the fight for suffrage, and women being denied educations.

The Fight for Suffrage

The fight for women’s suffrage was a long, hard-fought battle in American history. Activists and political reformers fought and fought for over one hundred years. As the early United States expanded, women became influential in society. But they still lacked many fundamental rights. Especially, the right to the vote. People began to wonder why women weren’t allowed to vote and that began the suffrage movement. “In 1848, a group of abolitionist activists—mostly women, but some men—gathered in Seneca Falls, New York to discuss the problem of women’s rights.” Right after the civil war ended, amendments were passed giving rights to newly freed African-Americans and eventually giving African-American men the right to vote. Many activists believed this was the opportunity to push for women’s suffrage.

“In 1869, a group called the National Woman Suffrage Association was formed and began the fight for a universal-suffrage amendment.” By the turn of the century, newly formed western states slowly began to hand women the right to vote. The outbreak of World War One may have shrunk attention on the suffrage movement but yet strengthened the argument that women work just as hard as men in the war effort and deserve the same rights that men have, as said as in an article in the History Channel. Then eventually on August 26, 1920, women finally achieved what they have been fighting for a very long time, the 19th amendment to the U.S. Constitution. American women could finally vote.

Inequalities in the Workplace

Women have to face many inequalities in society wherever they go, one of the most prominent examples is workplace discrimination. This is especially worse because women may be directed by men and speaking up would cost them their job . Unequal pay is a major part of workplace inequality. “Women in the United States earn on around 79 cents for every dollar that men earn but this gap is much worse for women of color.” “For every dollar a white man earns, Latinas earn 56, and African-American women earn 64.” This is a really bad problem.

Not paying women the same as men can limit their ability to be economically comfortable. According to Mic Magazine, this impacts the children of these women, too. “Of the 5.6 million children in poverty today, 2.5 million would come out of poverty if the gender pay gap closed.” In addition to unequal pay, there is lots of sexual harassment and sexism in the workplace. Some commons examples are women coming back from maternity leave and having their workload changed and often tough negotiations and difficult clients are handed to men, according to Forbes. Often, women are subject to many sex-based jokes, comments, and actions.

Around the world, many women are being denied an education right now. Mostly, in the middle-eastern world. In that part of the world, women are degraded and seen as anything but equal to their male counterparts. “In Saudi Arabia, officials may ask women for their male guardians’ consent.

This can happen even when no law or guideline requires such consent. Current practices assume women have no power to make their own decisions.” “Until 1956, women in Saudi Arabia were not allowed to be educated.” This means women have historically not been thought of as worthy of an education. This goes as a form of repression against women. Not allowing them to receive an education is preventing them from having knowledge of the world and entering important places in the workforce. This is intended to keep women like second class citizens in many countries. Many societies would advance much more if educations were given to all people.

In conclusion, this paper summarizes women’s suffrage, workplace inequality, and education being denied for many women. They have to deal with lots of inequality and repression around the world. “Women and girls represent half of the world’s population and therefore also half its potential.” I believe this quote to be very true. Once women are viewed as equal to men, society would advance much faster and better.”