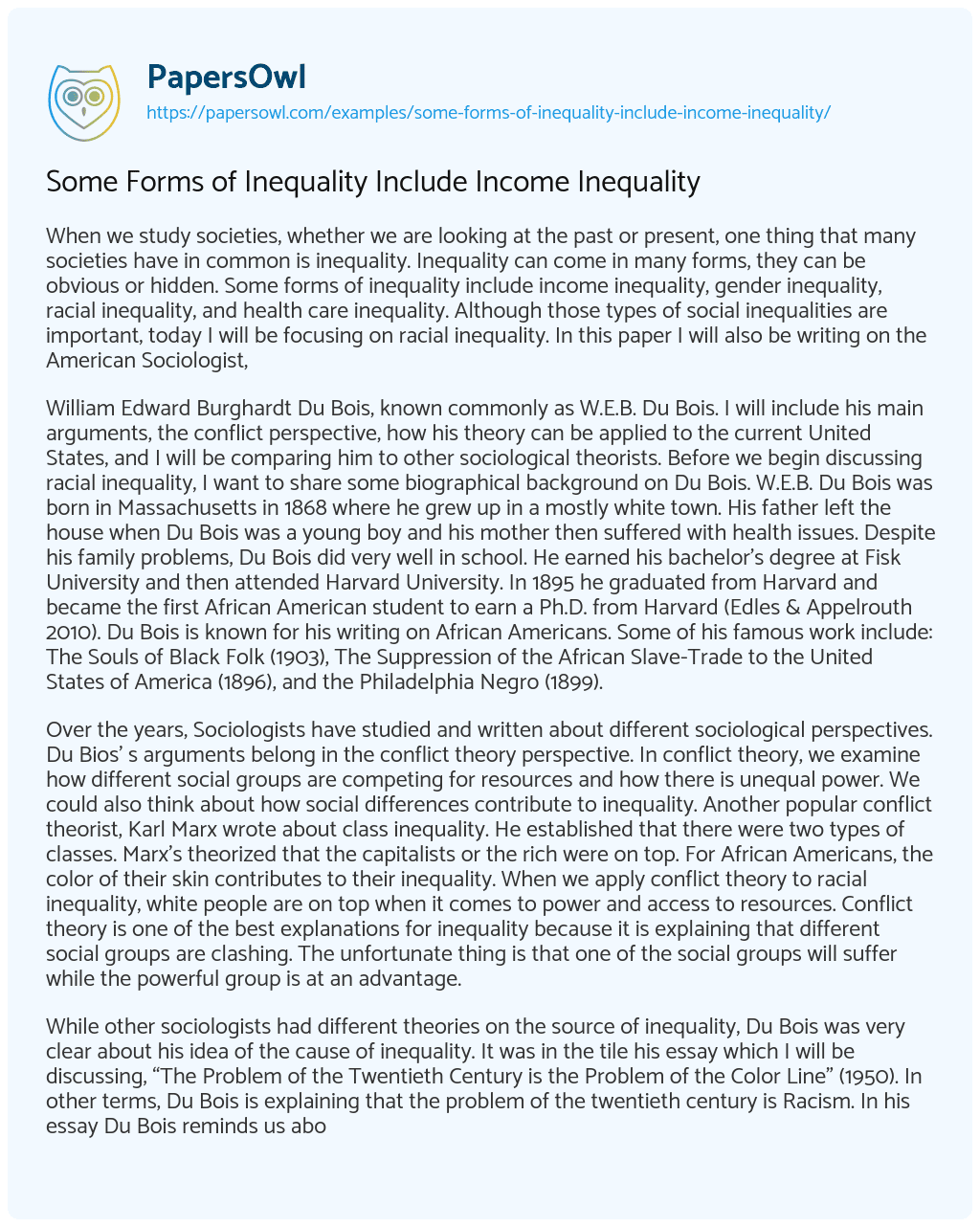 William Edward Burghardt Du Bois, known commonly as W.E.B. Du Bois. I will include his main arguments, the conflict perspective, how his theory can be applied to the current United States, and I will be comparing him to other sociological theorists. Before we begin discussing racial inequality, I want to share some biographical background on Du Bois. W.E.B. Du Bois was born in Massachusetts in 1868 where he grew up in a mostly white town. His father left the house when Du Bois was a young boy and his mother then suffered with health issues. Despite his family problems, Du Bois did very well in school. He earned his bachelor’s degree at Fisk University and then attended Harvard University. In 1895 he graduated from Harvard and became the first African American student to earn a Ph.D. from Harvard (Edles & Appelrouth 2010). Du Bois is known for his writing on African Americans. Some of his famous work include: The Souls of Black Folk (1903), The Suppression of the African Slave-Trade to the United States of America (1896), and the Philadelphia Negro (1899).

Over the years, Sociologists have studied and written about different sociological perspectives. Du Bios’ s arguments belong in the conflict theory perspective. In conflict theory, we examine how different social groups are competing for resources and how there is unequal power. We could also think about how social differences contribute to inequality. Another popular conflict theorist, Karl Marx wrote about class inequality. He established that there were two types of classes. Marx’s theorized that the capitalists or the rich were on top. For African Americans, the color of their skin contributes to their inequality. When we apply conflict theory to racial inequality, white people are on top when it comes to power and access to resources. Conflict theory is one of the best explanations for inequality because it is explaining that different social groups are clashing. The unfortunate thing is that one of the social groups will suffer while the powerful group is at an advantage.

While other sociologists had different theories on the source of inequality, Du Bois was very clear about his idea of the cause of inequality. It was in the tile his essay which I will be discussing, “The Problem of the Twentieth Century is the Problem of the Color Line” (1950). In other terms, Du Bois is explaining that the problem of the twentieth century is Racism. In his essay Du Bois reminds us about all of the hardships that African Americans have gone through. He talks about slavery, emancipation, integration, and civil rights. He states that there has been progress for African Americans, but there is still a gap of inequality. “We have not progressed with closed ranks like a trained army, but rather with serried and broken ranks, with wide gaps and even temporary retreats. But we have advanced” (Du Bois, Manza & Sauder 121). He points out that African Americans are still unequal, especially in education, marriage rights, civil rights, voting, occupations, criminal justice, and housing.

When it comes to civil rights, he talks about how mobs and lynching have decreased, but the way that they are treated in court is unfair. Another important thing that he brings up is voting. He acknowledges that the voting rights act was passed, but the number of African Americans that vote is low.”

Some Forms of Inequality Include Income Inequality. (2021, Apr 08). Retrieved from https://papersowl.com/examples/some-forms-of-inequality-include-income-inequality/