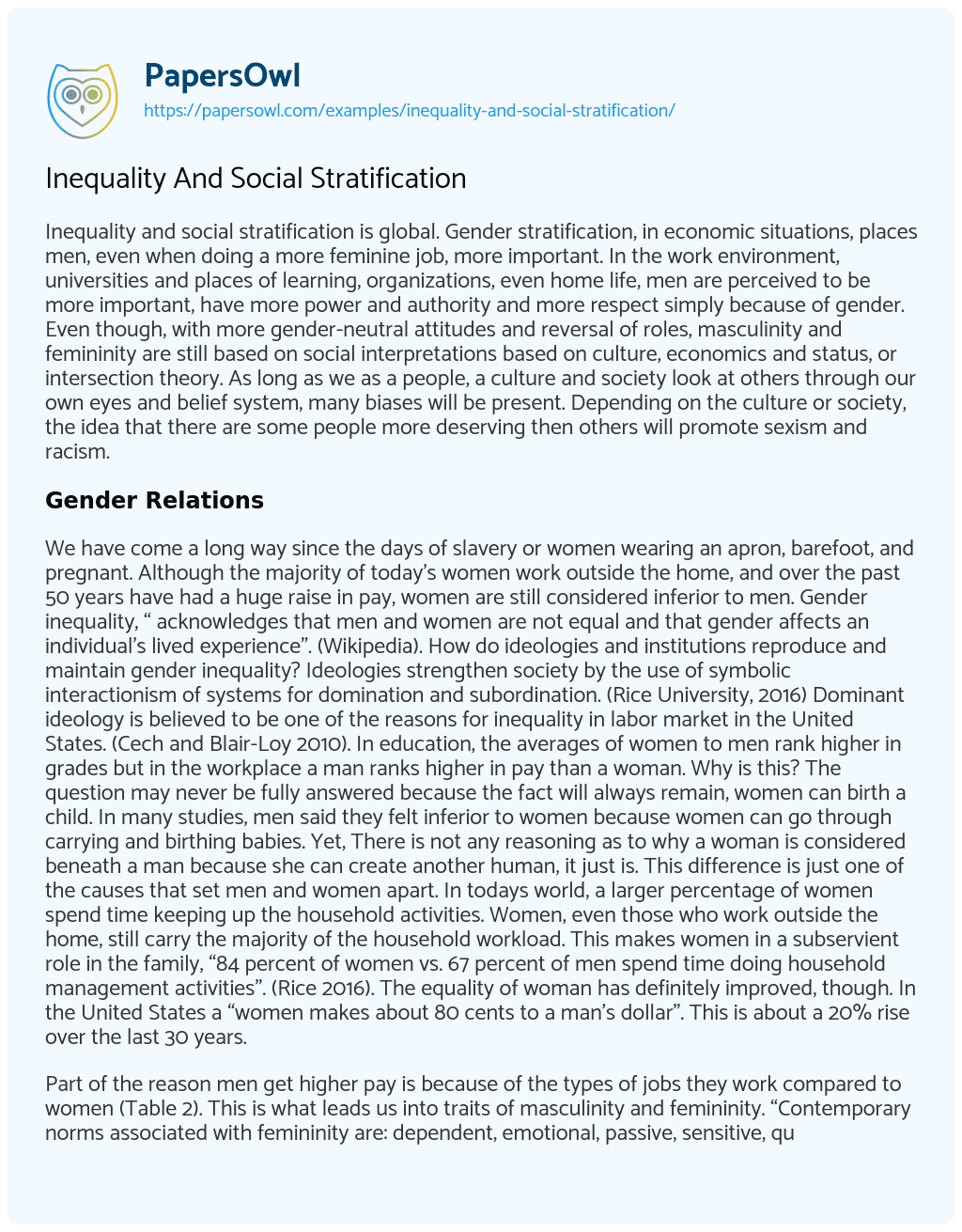 Inequality and social stratification is global. Gender stratification, in economic situations, places men, even when doing a more feminine job, more important. In the work environment, universities and places of learning, organizations, even home life, men are perceived to be more important, have more power and authority and more respect simply because of gender. Even though, with more gender-neutral attitudes and reversal of roles, masculinity and femininity are still based on social interpretations based on culture, economics and status, or intersection theory. As long as we as a people, a culture and society look at others through our own eyes and belief system, many biases will be present. Depending on the culture or society, the idea that there are some people more deserving then others will promote sexism and racism.

We have come a long way since the days of slavery or women wearing an apron, barefoot, and pregnant. Although the majority of today’s women work outside the home, and over the past 50 years have had a huge raise in pay, women are still considered inferior to men. Gender inequality, “ acknowledges that men and women are not equal and that gender affects an individual’s lived experience”. (Wikipedia). How do ideologies and institutions reproduce and maintain gender inequality? Ideologies strengthen society by the use of symbolic interactionism of systems for domination and subordination. (Rice University, 2016) Dominant ideology is believed to be one of the reasons for inequality in labor market in the United States. (Cech and Blair-Loy 2010). In education, the averages of women to men rank higher in grades but in the workplace a man ranks higher in pay than a woman. Why is this? The question may never be fully answered because the fact will always remain, women can birth a child. In many studies, men said they felt inferior to women because women can go through carrying and birthing babies. Yet, There is not any reasoning as to why a woman is considered beneath a man because she can create another human, it just is. This difference is just one of the causes that set men and women apart. In todays world, a larger percentage of women spend time keeping up the household activities. Women, even those who work outside the home, still carry the majority of the household workload. This makes women in a subservient role in the family, “84 percent of women vs. 67 percent of men spend time doing household management activities”. (Rice 2016). The equality of woman has definitely improved, though. In the United States a “women makes about 80 cents to a man’s dollar”. This is about a 20% rise over the last 30 years.

Part of the reason men get higher pay is because of the types of jobs they work compared to women (Table 2). This is what leads us into traits of masculinity and femininity. “Contemporary norms associated with femininity are: dependent, emotional, passive, sensitive, quiet, graceful, innocent, weak, flirtatious, nurturing, self-critical, soft, sexually submissive, accepting. Contemporary norms associated with masculinity are: independent, non-emotional, aggressive, tough-skinned, competitive, clumsy, experienced, strong, active, confident, hard, sexually aggressive, rebellious.” (Zevallos). Even though, each gender has stereotypes, in today’s society more and more lines are being crossed. In work, home life, child care and places of employment and the jobs held. Social stratification is one reason for gender inequality. Unequal access to social resources has been around throughout the ages. Women used to be considered property, children went to school seasonally working in the fields and factories, poorer people, people of color, gender, all provide social stratification and inequality to those of privilege and means.

In society a person’s sex determines whether someone is male or female, their biological right. Gender is what society or an individual “perceives “ himself or herself or someone else to be, “social institution of gender insists only that what they do is perceived as different”. (Budgeon, 2014). Sexuality is how someone feels about someone, whom they are attracted to.

It’s crazy to think that where we are in today’s world, with the advancement of technology and the ability to freely speak out on any issue, that we still have racial issues. The black man and black women still come in behind the white population due to inequalities in the system. Table 3 shows the earning gap of all races compared with White men.

Education and poverty is the biggest cause of the lag for the black community. The rates for drop outs and incarceration is at a high for black men, “The persistent disadvantage of low-education African Americans is, however, usually linked to the penal system but to large-scale social forces like urban deindustrialization, residential segregation, or wealth inequality”. (Pettit and Western. 2015). The high rate of incarceration for the African American is due to the “low wages, unemployment, family instability, recidivism, and restrictions on political and social rights”. (Pettit and Western. 2015).

To live in a society that is not biased or prejudiced would mean that each person would consider the intersection of all identifying markers to each individual Identifying markers include: race, ethnicity, religion, education, sexual orientation, status, money and more. The problem is, this will never happen because we have our own set of factors that determine how we look at people and the world. For example, if given a description of two people and a narrative, but little information, we imagine the people a certain way so the outcome of our judgment or interpretation is biased by our belief. However, given more information, the entire concept can change on the changed perceptions.

The way each class, race or just groups of people consider the other is part of what continues the inequality. Intersection theory, developed by Patricia Hill Collins, “suggests we cannot separate the effects of race, class, gender, sexual orientation, and other attributes. Privilege and/or hardships experienced by different populations are often determined by socioeconomic factors. Poorer communities will have more hardships, incarceration and problems. The position in there world is defined by the intersection of their identity markers. Where as, a person of wealth or means, will have less problems, unlikely time spent incarcerated and more privilege. When you tie in race, sexual orientation and the other factors, you have intersection theory.

Throughout history men and women have been unequal in respect, compensation, status and many other factors. The gap is not as great as it once was but it may never disappear. Gender inequality is further advanced by institutions, the work place, our own belief system, economics and so many other factors. This inequality is socially acceptable while still archaic. Men make more money, do less around the house, can’t bear children, get more respect than women even with gender neutral attitudes. Gender inequality is still better than racial inequality. A black man or woman will usually make less than their white counterpart. Inequality, based on the intersection theory of identifying markers, makes the problem seem insurmountable. How do we change a culture or society? How do we make it better? How do we change basic cultural views of the world? Realization and determination is the only answer, individuals changing society, one idea or family at a time.