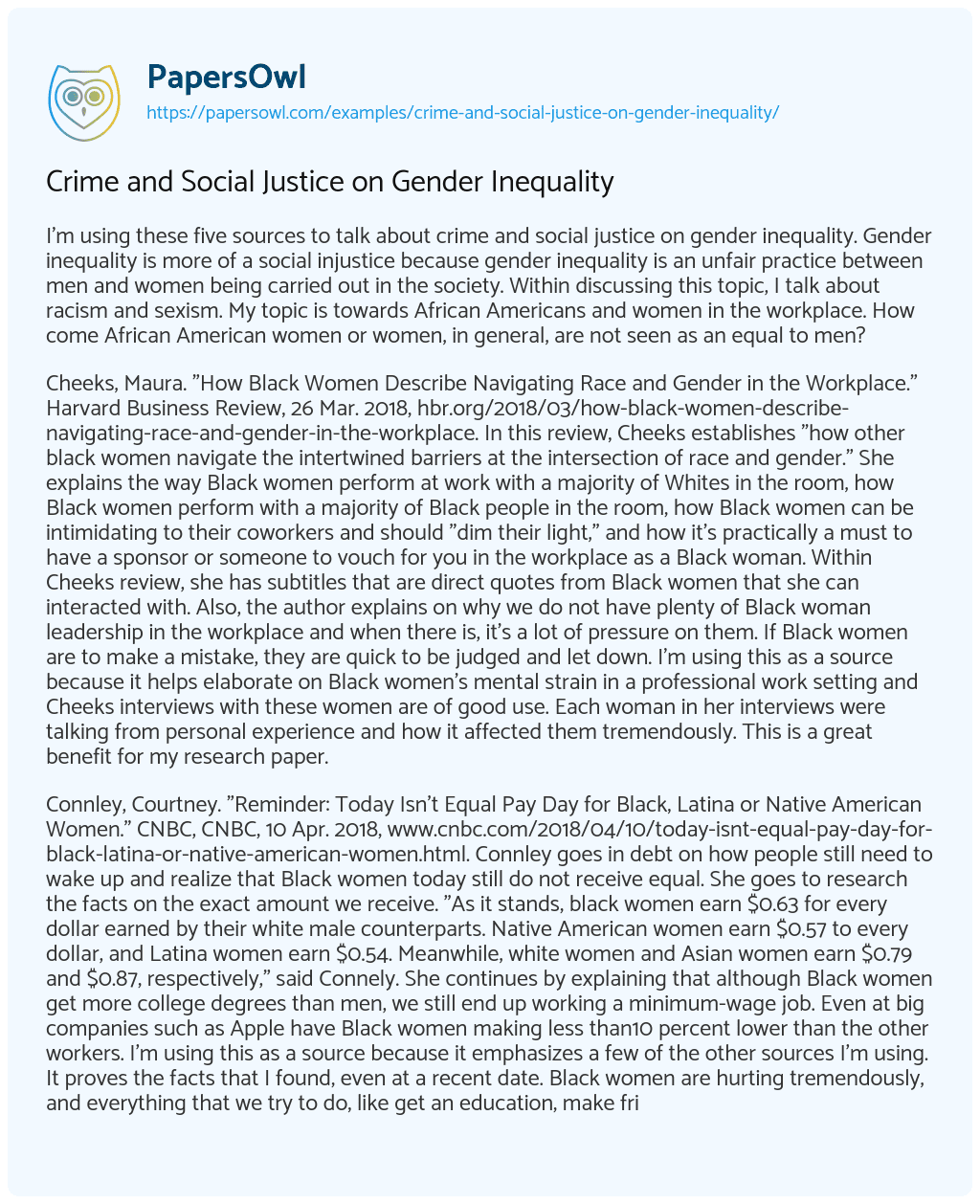 Cheeks, Maura. “How Black Women Describe Navigating Race and Gender in the Workplace.” Harvard Business Review, 26 Mar. 2018, hbr.org/2018/03/how-black-women-describe-navigating-race-and-gender-in-the-workplace. In this review, Cheeks establishes “how other black women navigate the intertwined barriers at the intersection of race and gender.” She explains the way Black women perform at work with a majority of Whites in the room, how Black women perform with a majority of Black people in the room, how Black women can be intimidating to their coworkers and should “dim their light,” and how it’s practically a must to have a sponsor or someone to vouch for you in the workplace as a Black woman. Within Cheeks review, she has subtitles that are direct quotes from Black women that she can interacted with. Also, the author explains on why we do not have plenty of Black woman leadership in the workplace and when there is, it’s a lot of pressure on them. If Black women are to make a mistake, they are quick to be judged and let down. I’m using this as a source because it helps elaborate on Black women’s mental strain in a professional work setting and Cheeks interviews with these women are of good use. Each woman in her interviews were talking from personal experience and how it affected them tremendously. This is a great benefit for my research paper.

Connley, Courtney. “Reminder: Today Isn’t Equal Pay Day for Black, Latina or Native American Women.” CNBC, CNBC, 10 Apr. 2018, www.cnbc.com/2018/04/10/today-isnt-equal-pay-day-for-black-latina-or-native-american-women.html. Connley goes in debt on how people still need to wake up and realize that Black women today still do not receive equal. She goes to research the facts on the exact amount we receive. “As it stands, black women earn $0.63 for every dollar earned by their white male counterparts. Native American women earn $0.57 to every dollar, and Latina women earn $0.54. Meanwhile, white women and Asian women earn $0.79 and $0.87, respectively,” said Connely. She continues by explaining that although Black women get more college degrees than men, we still end up working a minimum-wage job. Even at big companies such as Apple have Black women making less than10 percent lower than the other workers. I’m using this as a source because it emphasizes a few of the other sources I’m using. It proves the facts that I found, even at a recent date. Black women are hurting tremendously, and everything that we try to do, like get an education, make friends within the work place, show our determination, etc, just doesn’t seem to work.

McNally, Victoria. “7 Ways Moana Is the Most Revolutionary Disney Princess Yet.” Revelist.com, 21 Nov. 2016, www.revelist.com/movies/moana-disney-review/5938. This article discusses seven reasons on why Moana, a Disney movie, is different from the other Disney films. However, I’m focused on how this article displays Moana as a power gender influence. First, McNally points out Moana has no reference of romance within the movie. This shows Moana doesn’t need to be married prove her value, and she doesn’t need a man to influence her decision to save her village. Second, Moana shows a man, Maui, how to take responsibility and getting off his butt. Third, Moana is “the chosen one” because of who she is. Typically, a male is considered “the chosen one.” Lastly, Moana has doubt in herself at first, but after the villagers look to her for decision making, she finds her purpose in leadership. No men needed to complete the job. I’m using this article as a source in my paper because this article is using details from a Disney film to show gender inequality in a way you wouldn’t think. Although the main character is not black, this young girl replaces the role of a man within the movie. This movie is quit appropriate for all ages, which shows children that there is no limit in what you can do in this world whether girl or boy, and to always have faith in yourself even when the world tells you that you shouldn’t.

Nelson, Raina. “Black Women and the Pay Gap.” AAUW: Empowering Women Since 1881, 1 Aug. 2018, www.aauw.org/article/black-women-and-the-pay-gap/. Nelson tells us that Black women are an “intersection of sexism and racism.” She goes into detail about the amount Black women receive compared to Whites, the limitation on their education, and the negativity that is placed on them when going into their careers. Under “wealth gap,” the author explains specifically why a Black woman’s earning is disgracefully lower than the Whites. She even goes back into history times to explain her reasoning. Under “occupational segregation,” this looks more into how come a large percentage of Black women are working more minimum-wage jobs than others and if discriminatory pay is a concern more in minimum-wage jobs or higher paying jobs. Under “education,” informs us on if an education can make or break a Black woman’s career. It’s especially quite hard for a Black woman to manage college when it’s expensive. I want to use this as a source in my paper because this article talks about the pay difference from Black women and the Whites. Unlike the other sources, it benefits my research topic by discussing a topic that highly affects Black women in the workplace. Toward the end of the article, Nelson goes on to explain how equal pay can be the “difference between struggling and sustainability for a family.”

RPappas. “Racial and Gender Bias at Work Harmful for Women of Color and Their Health.” Catalyst, 15 Feb. 2018, www.catalyst.org/media/racial-and-gender-bias-work-harmful-women-color-and-their-health. This article talks about the “overall health, well-being and ability to thrive” as a woman of color. It lists the emotional tax that they hit, how they are always on guard, and even that they are highly motivated top talent. Black women with emotional tax are having a lot of sleep problems, which is enough to affect the human body. One loses the ability to focus, feel productive, work efficiently, and more. If it is continuous, one will, most likely, consider quitting their job. Black women with feeling on guard deal with constant competition. Making one feel as though they have to work harder than the next, or perform better than the rest.  “Over 40% of Asian, Black, Latinx and multiracial employees feel on guard because they anticipate racial/ethnic bias,” said RPappas. Black women, also, tend to get more creative under these circumstances. “Asian, Black and Latinx employees who are highly on guard also report higher creativity (81%) and are more likely to speak up (79%)”demonstrating the benefit to companies of attracting and retaining top talent from all backgrounds,” said RPappas. I’m using this article in my paper because it goes below the surface of how Black women perform at work. This explains how Black women are affected internally with also bringing out positivity from getting under pressure.