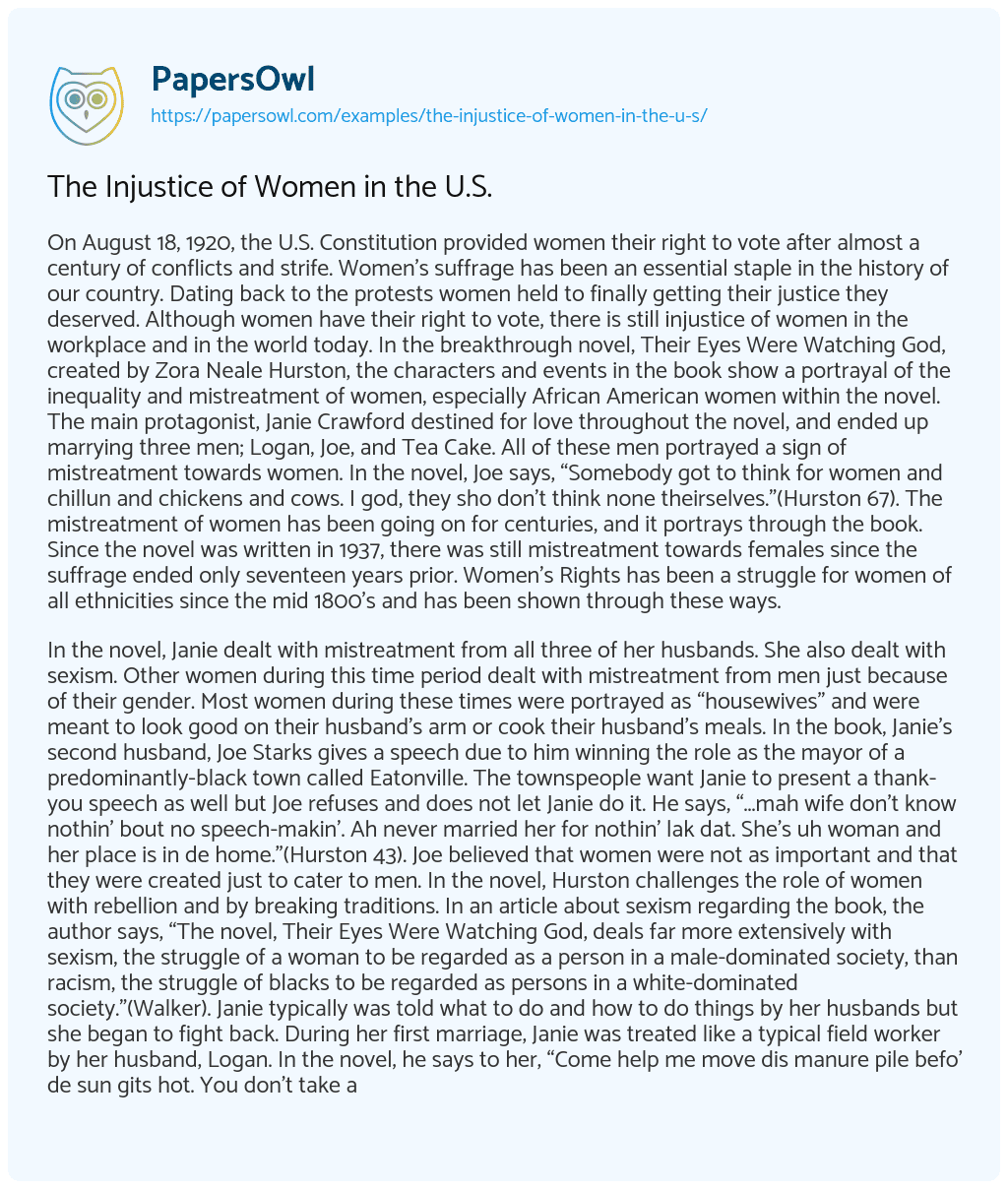 On August 18, 1920, the U.S. Constitution provided women their right to vote after almost a century of conflicts and strife. Women’s suffrage has been an essential staple in the history of our country. Dating back to the protests women held to finally getting their justice they deserved. Although women have their right to vote, there is still injustice of women in the workplace and in the world today. In the breakthrough novel, Their Eyes Were Watching God, created by Zora Neale Hurston, the characters and events in the book show a portrayal of the inequality and mistreatment of women, especially African American women within the novel. The main protagonist, Janie Crawford destined for love throughout the novel, and ended up marrying three men; Logan, Joe, and Tea Cake. All of these men portrayed a sign of mistreatment towards women. In the novel, Joe says, “Somebody got to think for women and chillun and chickens and cows. I god, they sho don’t think none theirselves.”(Hurston 67). The mistreatment of women has been going on for centuries, and it portrays through the book. Since the novel was written in 1937, there was still mistreatment towards females since the suffrage ended only seventeen years prior. Women’s Rights has been a struggle for women of all ethnicities since the mid 1800’s and has been shown through these ways.

In the novel, Janie dealt with mistreatment from all three of her husbands. She also dealt with sexism. Other women during this time period dealt with mistreatment from men just because of their gender. Most women during these times were portrayed as “housewives” and were meant to look good on their husband’s arm or cook their husband’s meals. In the book, Janie’s second husband, Joe Starks gives a speech due to him winning the role as the mayor of a predominantly-black town called Eatonville. The townspeople want Janie to present a thank-you speech as well but Joe refuses and does not let Janie do it. He says, “…mah wife don’t know nothin’ bout no speech-makin’. Ah never married her for nothin’ lak dat. She’s uh woman and her place is in de home.”(Hurston 43). Joe believed that women were not as important and that they were created just to cater to men. In the novel, Hurston challenges the role of women with rebellion and by breaking traditions. In an article about sexism regarding the book, the author says, “The novel, Their Eyes Were Watching God, deals far more extensively with sexism, the struggle of a woman to be regarded as a person in a male-dominated society, than racism, the struggle of blacks to be regarded as persons in a white-dominated society.”(Walker). Janie typically was told what to do and how to do things by her husbands but she began to fight back. During her first marriage, Janie was treated like a typical field worker by her husband, Logan. In the novel, he says to her, “Come help me move dis manure pile befo’ de sun gits hot. You don’t take a bit of interest in dis place. ‘Tain’t no use in foolin’ round in dat kitchen all day long…”(Hurston 31). But Janie has has enough of Logan’s mistreatment. She says, “You don’t need mah help out dere, Logan. Youse in yo’ place and Ah’m in mine.” Janie had finally stood up for herself and put Logan in his place. Women in the 1920’s had stood up for themselves too. They did not have their freedom to vote, and we’re suffering for suffrage. Women protested, and went to jail for the cause. Rebellion was a factor of women’s rights culturally impacted women and the world, but also the lack of education for some women was a factor.

Janie’s grandmother, Nanny did not have an education so she wanted more for Janie and self-assurance that someone would provide for Janie financially once Nanny passed away. The goal for Janie was to receive a better life. Earlier in the novel, Janie was caught in the act of kissing a boy from her town named Johnny Taylor. Nanny isn’t pleased with this and says, “Whut Ah seen just now is plenty for me, honey, Ah don’t want no trashy nigger, no breath-and-britches, lak Johnny Taylor usin’ yo’ body to wipe his foots on.”(Hurston 17). Nanny believes that Johnny Taylor isn’t any good for Janie. She wants someone who can potentially provide for Janie one day. For example, when Janie married Tea Cake, she had no worries financially because he provided for her. In an article about feminism according to the book, the author says, “Furthermore, although Janie is wealthy in comparison to Tea Cake, she has no financial responsibilities. Tea Cake insists that she live on what he makes.”(Jordan). So Nanny does what she thinks is best at heart, and finds Janie a husband who can take care of Janie’s needs financially. During this time period, some women were also faced with racial barriers which prevented the goal of women’s rights from being accomplished sooner.

Racial barriers in the 1920’s had an impact substantially on African American Women. It just so happened that while an oppression of a woman’s freedom was going on along with that if you were an African American woman, it suppressed you even more. You may ask yourself is there even a difference between The White Woman’s Oppression & The Black Women’s Oppression. Well of course there is. Since the mid 19th century African American women have been fighting for freedom, and the right to vote. This suffrage started due to men looking at the African Woman as useless,uneducated , and controllable. At that moment the white don would do anything in power to suppress even the thoughts of a black women. African Americans had every reason to vote towards equality. Sadly the don thought silencing the Black Sheep of America would be better. In an article regarding civil rights, it is mentioned by an author that rights were limited. He says, “Women, Native Americans, and Asians faced many of the same handicaps as blacks in the decades following the Civil War.”(Civil Rights). The movement of women was actually started by African American women. It was a movement of restitution sought to help build the dream of equality. You could say that Women’s Suffrage was a racial barrier. Being that it allowed African Americans to be in bondage.
In conclusion, women were faced with plenty of trial and tribulations. After a long battle for equality, their fight was over. Although, females still face hardships to this day, we have better opportunities, better chances at life. Women have better opportunity with education. More female doctors, teachers, scientists. Racial barriers between white and black women isn’t as bad as in the mid-twentieth century, and also gender equality has changed tremendously.

The Injustice of Women in the U.S.. (2021, May 14). Retrieved from https://papersowl.com/examples/the-injustice-of-women-in-the-u-s/