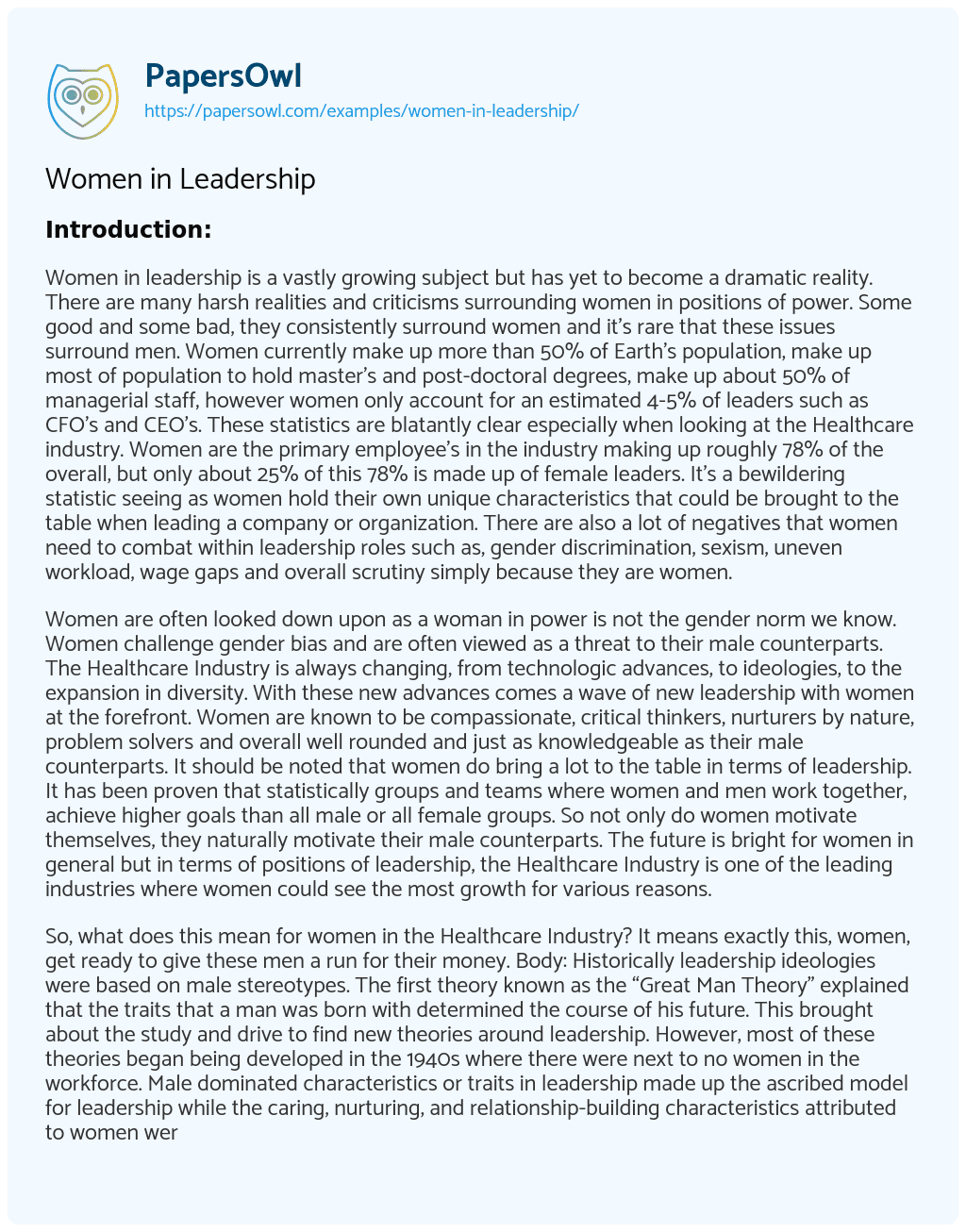 Women in leadership is a vastly growing subject but has yet to become a dramatic reality. There are many harsh realities and criticisms surrounding women in positions of power. Some good and some bad, they consistently surround women and it’s rare that these issues surround men. Women currently make up more than 50% of Earth’s population, make up most of population to hold master’s and post-doctoral degrees, make up about 50% of managerial staff, however women only account for an estimated 4-5% of leaders such as CFO’s and CEO’s. These statistics are blatantly clear especially when looking at the Healthcare industry. Women are the primary employee’s in the industry making up roughly 78% of the overall, but only about 25% of this 78% is made up of female leaders. It’s a bewildering statistic seeing as women hold their own unique characteristics that could be brought to the table when leading a company or organization. There are also a lot of negatives that women need to combat within leadership roles such as, gender discrimination, sexism, uneven workload, wage gaps and overall scrutiny simply because they are women.

Women are often looked down upon as a woman in power is not the gender norm we know. Women challenge gender bias and are often viewed as a threat to their male counterparts. The Healthcare Industry is always changing, from technologic advances, to ideologies, to the expansion in diversity. With these new advances comes a wave of new leadership with women at the forefront. Women are known to be compassionate, critical thinkers, nurturers by nature, problem solvers and overall well rounded and just as knowledgeable as their male counterparts. It should be noted that women do bring a lot to the table in terms of leadership. It has been proven that statistically groups and teams where women and men work together, achieve higher goals than all male or all female groups. So not only do women motivate themselves, they naturally motivate their male counterparts. The future is bright for women in general but in terms of positions of leadership, the Healthcare Industry is one of the leading industries where women could see the most growth for various reasons.

So, what does this mean for women in the Healthcare Industry? It means exactly this, women, get ready to give these men a run for their money. Body: Historically leadership ideologies were based on male stereotypes. The first theory known as the “Great Man Theory” explained that the traits that a man was born with determined the course of his future. This brought about the study and drive to find new theories around leadership. However, most of these theories began being developed in the 1940s where there were next to no women in the workforce. Male dominated characteristics or traits in leadership made up the ascribed model for leadership while the caring, nurturing, and relationship-building characteristics attributed to women were not seen as characteristics that had any bearing on one’s leadership ability. (McEldowney, Bobrowski, Gramberg, 2009.) Women have played a vital role in leadership since women were allowed in the workforce post World War II. The Healthcare industry is among one of the few industries where women dominate. Although women make up nearly 78% of the healthcare workforce (Kircheimer, 2007), most individuals in top ranks of CEO, CFO and COO are male.

Women do hold a set of characteristics that their male counterparts lack, which can be a threat to men in leadership roles. Women are usually seen as weak and timid, when, women are more nurturing, compassionate, and build stronger personal relationships with people and their staff. A rigid structure has always been more of a males leadership style, and never showing emotion or compassion has always been the norm. The working world as a whole is seen as a males world, and this is not different when it comes to the healthcare industry and women in positions of leadership. Some bias comes when a female leader first begins their careers and don’t necessarily know where they stand in regards to their male counterparts. “To be successful in this environment, women must understand the culture and values to offset the gender-based attitudes of male colleagues” (Elias, 2018). who are currently in leadership positions tend to be looked at as lesser and tend to be evaluated much lower than men.

Receiving lower evaluations can reduce the likelihood of an individual’s promotion and advancement through an organization and also results in lower salaries (e.g., Lyness & Heilman, 2006). Women are also consistently paid less than men even when completing the same jobs or holding the same positions of power. This is no different in the Healthcare Industry. Women face a lot of adversity in leadership roles, however this should not make women feel as though they are not good enough or should never strive to become a successful leader.

Women in Leadership. (2021, May 10). Retrieved from https://papersowl.com/examples/women-in-leadership/

A Proposed Solution to the Challenges in Gender Leadership

Lack of Minorities (Women) in Policing