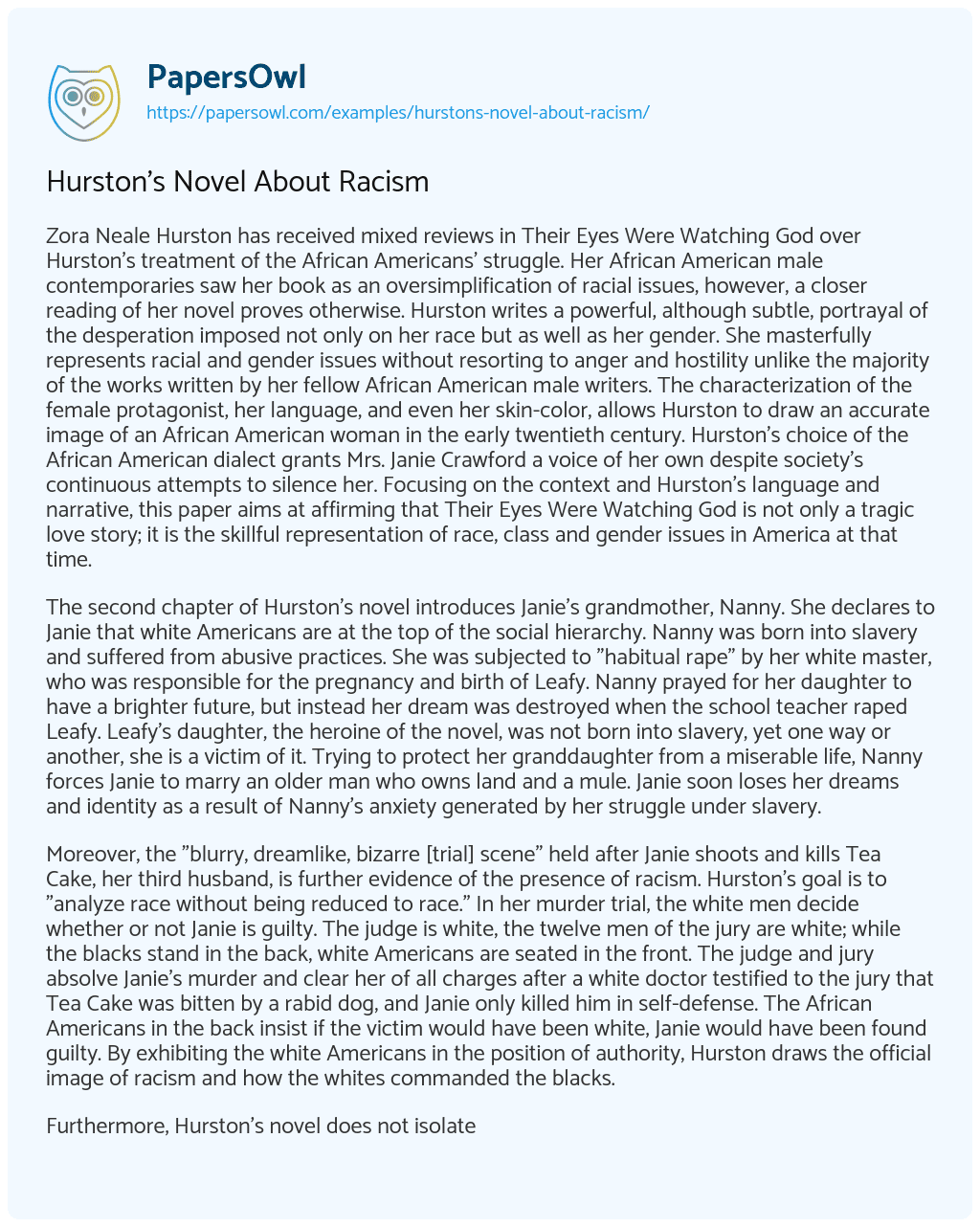 Zora Neale Hurston has received mixed reviews in Their Eyes Were Watching God over Hurston’s treatment of the African Americans’ struggle. Her African American male contemporaries saw her book as an oversimplification of racial issues, however, a closer reading of her novel proves otherwise. Hurston writes a powerful, although subtle, portrayal of the desperation imposed not only on her race but as well as her gender. She masterfully represents racial and gender issues without resorting to anger and hostility unlike the majority of the works written by her fellow African American male writers. The characterization of the female protagonist, her language, and even her skin-color, allows Hurston to draw an accurate image of an African American woman in the early twentieth century. Hurston’s choice of the African American dialect grants Mrs. Janie Crawford a voice of her own despite society’s continuous attempts to silence her. Focusing on the context and Hurston’s language and narrative, this paper aims at affirming that Their Eyes Were Watching God is not only a tragic love story; it is the skillful representation of race, class and gender issues in America at that time.

The second chapter of Hurston’s novel introduces Janie’s grandmother, Nanny. She declares to Janie that white Americans are at the top of the social hierarchy. Nanny was born into slavery and suffered from abusive practices. She was subjected to “habitual rape” by her white master, who was responsible for the pregnancy and birth of Leafy. Nanny prayed for her daughter to have a brighter future, but instead her dream was destroyed when the school teacher raped Leafy. Leafy’s daughter, the heroine of the novel, was not born into slavery, yet one way or another, she is a victim of it. Trying to protect her granddaughter from a miserable life, Nanny forces Janie to marry an older man who owns land and a mule. Janie soon loses her dreams and identity as a result of Nanny’s anxiety generated by her struggle under slavery.

Moreover, the “blurry, dreamlike, bizarre [trial] scene” held after Janie shoots and kills Tea Cake, her third husband, is further evidence of the presence of racism. Hurston’s goal is to “analyze race without being reduced to race.” In her murder trial, the white men decide whether or not Janie is guilty. The judge is white, the twelve men of the jury are white; while the blacks stand in the back, white Americans are seated in the front. The judge and jury absolve Janie’s murder and clear her of all charges after a white doctor testified to the jury that Tea Cake was bitten by a rabid dog, and Janie only killed him in self-defense. The African Americans in the back insist if the victim would have been white, Janie would have been found guilty. By exhibiting the white Americans in the position of authority, Hurston draws the official image of racism and how the whites commanded the blacks.

Furthermore, Hurston’s novel does not isolate racism to a limited perspective between blacks and whites. She broadens the concept of racism into an internalized racism. Racial discrimination was based on skin color, even among African American communities, where the “light-skinned” person was treated better than the “dark-complexioned” person for the fact that lighter skinned people had white blood in their veins. Hurston skillfully represents this internalized racism through Mrs. Turner. Although she is black, Mrs. Turner is as racist as any other white American. Janie is introduced to Mrs. Turner after she leaves Eatonville with Tea Cake, and travels to the Everglades (the muck). Mrs. Turner urges blacks to marry light skins to “lighten up de race,” so she attempts to convince Janie to marry her brother instead of Tea Cake. Hurston asserts that racism is more pervasive in American society than the typical confrontation between blacks and whites through her character Mrs. Turner.

In contrast to the negative reviews by some African Americans, female critics honored Hurston for portraying the life and struggle of African American women, and womanhood in general, under male dominance. The novel represents women’s “exclusion” from power and particularly the power of speech. Hurston argues the society in that period tended to silence women.

Throughout the novel, there are several references that women are placed in an equal position to animals by men. Joe Starks, Janie’s second husband, states that women, like animals, cannot think and decide what is best for them and therefore men should control them. Nanny, as well, illustrates this image to Janie by saying “De nigger woman is de mule uh de world so fur as Ah can see.” However, Nanny’s indication of the similarities between a mule and women is more positive than Joe’s idea that women are as primitive as animals. Nanny also compares the strength of the mule to the power of the African American women; she carries the loads that are thrown on her shoulder by men of both races without complaint.

In another feminist gesture, Hurston uses the trial scene not only to discuss the racial issues but to discuss gender-related matters as well. Du Plessis describes this scene as “the main place in which race and gender, as well as class and sexuality, show intense cross-purposes and mutual conflicts.” In Janie’s trial, Janie faces white men and women, and African American men; the only group to express sympathy were the white females. Hurston indicates through this scene that white women are more affectionate towards African American women, possibly more than the African American males, despite the racial difference.

Zora Neale Hurston in Their Eyes Were Watching God, expertly celebrates the complexity of the African American society and their language, portrays racism in a new light and follows an African American woman’s search for freedom and identity. It represents one woman’s courage to follow her heart, abandon the luxurious lifestyle and to explore the true beauty of love and life. It is a story that never ceases to end because there is no ending in reach.

“Their Eyes were Watching God” by Zora Hurston – the American Dream