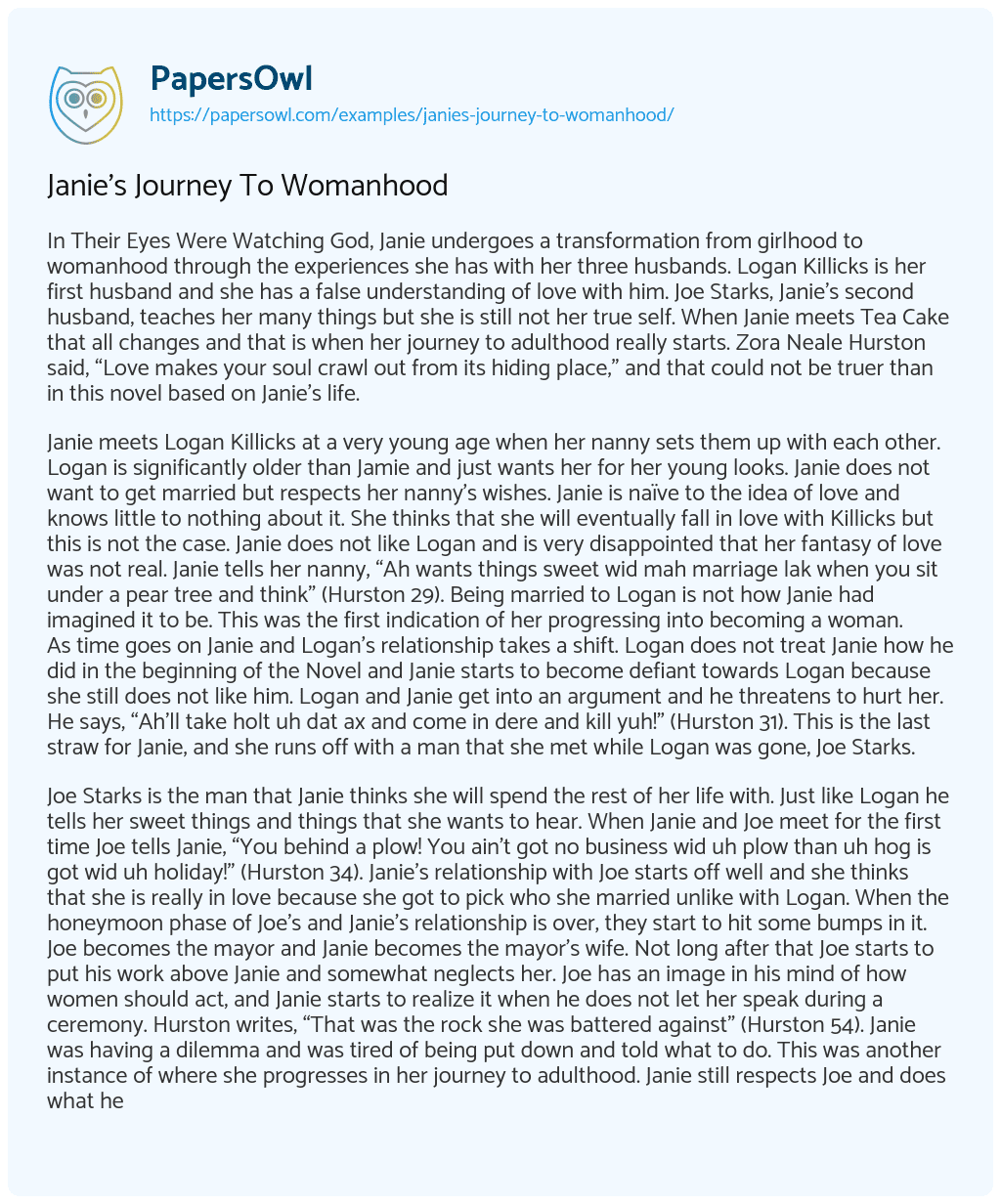 In Their Eyes Were Watching God, Janie undergoes a transformation from girlhood to womanhood through the experiences she has with her three husbands. Logan Killicks is her first husband and she has a false understanding of love with him. Joe Starks, Janie’s second husband, teaches her many things but she is still not her true self. When Janie meets Tea Cake that all changes and that is when her journey to adulthood really starts. Zora Neale Hurston said, “Love makes your soul crawl out from its hiding place,” and that could not be truer than in this novel based on Janie’s life.

Janie meets Logan Killicks at a very young age when her nanny sets them up with each other. Logan is significantly older than Jamie and just wants her for her young looks. Janie does not want to get married but respects her nanny’s wishes. Janie is naïve to the idea of love and knows little to nothing about it. She thinks that she will eventually fall in love with Killicks but this is not the case. Janie does not like Logan and is very disappointed that her fantasy of love was not real. Janie tells her nanny, “Ah wants things sweet wid mah marriage lak when you sit under a pear tree and think” (Hurston 29). Being married to Logan is not how Janie had imagined it to be. This was the first indication of her progressing into becoming a woman. As time goes on Janie and Logan’s relationship takes a shift. Logan does not treat Janie how he did in the beginning of the Novel and Janie starts to become defiant towards Logan because she still does not like him. Logan and Janie get into an argument and he threatens to hurt her. He says, “Ah’ll take holt uh dat ax and come in dere and kill yuh!” (Hurston 31). This is the last straw for Janie, and she runs off with a man that she met while Logan was gone, Joe Starks.

Joe Starks is the man that Janie thinks she will spend the rest of her life with. Just like Logan he tells her sweet things and things that she wants to hear. When Janie and Joe meet for the first time Joe tells Janie, “You behind a plow! You ain’t got no business wid uh plow than uh hog is got wid uh holiday!” (Hurston 34). Janie’s relationship with Joe starts off well and she thinks that she is really in love because she got to pick who she married unlike with Logan. When the honeymoon phase of Joe’s and Janie’s relationship is over, they start to hit some bumps in it. Joe becomes the mayor and Janie becomes the mayor’s wife. Not long after that Joe starts to put his work above Janie and somewhat neglects her. Joe has an image in his mind of how women should act, and Janie starts to realize it when he does not let her speak during a ceremony. Hurston writes, “That was the rock she was battered against” (Hurston 54). Janie was having a dilemma and was tired of being put down and told what to do. This was another instance of where she progresses in her journey to adulthood. Janie still respects Joe and does what he says even though she is miserable. Until one day she snaps. She tells Joe off and Joe is shocked. He does not know what to do so he just slaps her and storms off. After that event there was a lot of tension and the two did not talk until, he was on his death bed. Janie finally has the courage to tell Joe everything and how she feels but he does not want to hear any of it and he later dies. When Joe dies, Janie does not cry but feels a sort of relief. She takes off the head wraps that Joe made her wear and tells the townspeople that their mayor is dead. For Joe’s funeral Janie was dressed up and did not shed one tear. She masked her emotions to keep up her appearance and reputation as the mayor’s wife.

Not too long after Joe’s death, Janie sees another man. His name is Tea Cake and he is different than the other two and Janie could sense it. He asks her if she wants to play checkers with him, but she does not know how to play because Joe never taught her. Hurston writes, “He set it up and began to show her and she found herself glowing inside. Someone wanted her to play” (Hurston 114). He is not like any man that she has ever been with. The townspeople did not like them together because of her high status and his lack thereof. Janie does not care about other people’s opinions other than his when it came to them being together. The two later get married and Janie leaves Eatonville and sells her store in order to be with Tea Cake. Unlike Janie’s reaction to Joe when he slaps her, when Tea cake whips her, she does not really mind it and just obeys him. She would do anything for him and he would do anything for her but when Tea Cake dies Janie is truly heart broken. She cries and does not care about her looks. She only cares about Tea Cake and how he looks, “The undertaker did a handsome job and Tea cake slept royally on his white silken couch among the roses she had bought” (Hurston 222). That day was all about him and Janie did not mind it one bit.

Janie changed and matured a lot throughout the novel. She went from being a little girl who daydreamed about love to actually living her fantasy with a tragic ending. To Janie, Tea Cake was not truly dead as long as she remembered and loved him. That is all she wants, to love and be loved. Hurston wrote, “Of course he wasn’t dead. He could never be dead until she herself had finished feeling and thinking” (Hurston 227). Janie learns throughout the novel that her husbands are all different and have a different role in her understanding of love as well as of herself which completes her journey from girlhood to womanhood.”

Janie’s Journey To Womanhood. (2021, May 10). Retrieved from https://papersowl.com/examples/janies-journey-to-womanhood/

Janie’s Progression of Life through Themes