The Role of Silence 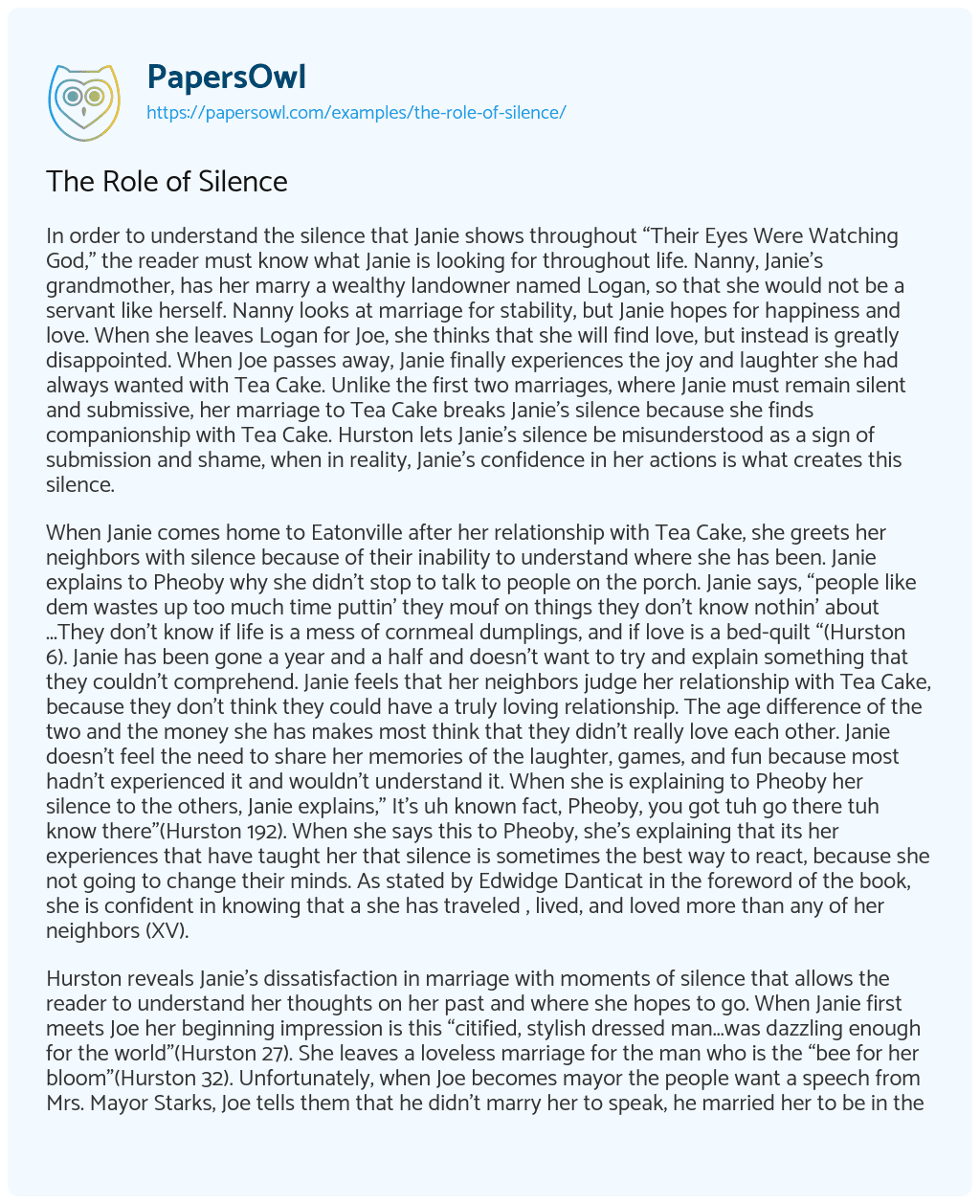 In order to understand the silence that Janie shows throughout “Their Eyes Were Watching God,” the reader must know what Janie is looking for throughout life. Nanny, Janie’s grandmother, has her marry a wealthy landowner named Logan, so that she would not be a servant like herself. Nanny looks at marriage for stability, but Janie hopes for happiness and love. When she leaves Logan for Joe, she thinks that she will find love, but instead is greatly disappointed. When Joe passes away, Janie finally experiences the joy and laughter she had always wanted with Tea Cake. Unlike the first two marriages, where Janie must remain silent and submissive, her marriage to Tea Cake breaks Janie’s silence because she finds companionship with Tea Cake. Hurston lets Janie’s silence be misunderstood as a sign of submission and shame, when in reality, Janie’s confidence in her actions is what creates this silence.

When Janie comes home to Eatonville after her relationship with Tea Cake, she greets her neighbors with silence because of their inability to understand where she has been. Janie explains to Pheoby why she didn’t stop to talk to people on the porch. Janie says, “people like dem wastes up too much time puttin’ they mouf on things they don’t know nothin’ about …They don’t know if life is a mess of cornmeal dumplings, and if love is a bed-quilt “(Hurston 6). Janie has been gone a year and a half and doesn’t want to try and explain something that they couldn’t comprehend. Janie feels that her neighbors judge her relationship with Tea Cake, because they don’t think they could have a truly loving relationship. The age difference of the two and the money she has makes most think that they didn’t really love each other. Janie doesn’t feel the need to share her memories of the laughter, games, and fun because most hadn’t experienced it and wouldn’t understand it. When she is explaining to Pheoby her silence to the others, Janie explains,” It’s uh known fact, Pheoby, you got tuh go there tuh know there”(Hurston 192). When she says this to Pheoby, she’s explaining that its her experiences that have taught her that silence is sometimes the best way to react, because she not going to change their minds. As stated by Edwidge Danticat in the foreword of the book, she is confident in knowing that a she has traveled , lived, and loved more than any of her neighbors (XV).

Hurston reveals Janie’s dissatisfaction in marriage with moments of silence that allows the reader to understand her thoughts on her past and where she hopes to go. When Janie first meets Joe her beginning impression is this “citified, stylish dressed man…was dazzling enough for the world”(Hurston 27). She leaves a loveless marriage for the man who is the “bee for her bloom”(Hurston 32). Unfortunately, when Joe becomes mayor the people want a speech from Mrs. Mayor Starks, Joe tells them that he didn’t marry her to speak, he married her to be in the kitchen. Janie remains silent because of the fact that, “Joe spoke without giving her a chance to say anything one way or another that took the bloom off of things” (Hurston 43). Hurston gives us the image of a bloom falling off which means that the bee is useless. This allows us to see Janie’s new perspective on how her husband sees her. Janie begins to realize that Joe cares only of himself and how he is seen. When Janie’s dinner doesn’t meet Joe’s expectations, Joe slaps her. She stands silent where he left her and begins to look inward. She then realizes that, “Looking at it she saw that it was the flesh and blood figure of her dreams.

Just something that she had grabbed up to drape her dreams over”(Hurston 72). Janie has come into the reality that Joe will never give her the marriage that she desires. The drape references the idea of blocking the truth, just like how a drape can block and hide light shining through. She sees that Joe wants a submissive wife. From then on her silence was the only way for them to live together. Hurston explains,“No matter what Jody did, she said nothing she had learned how to talk some and leave some. She was a rut in the road. Plenty of life beneath the surface but it kept beaten down by the wheels” (Hurston 76). As Janie had learned that he doesn’t value what she has to say, she decides to keep quiet instead standing up for herself. The figure of language that Hurston implies that his meanness keeps beating her down more and more just as a wheel does when hitting a rut. She often wonders if she should leave without telling anyone. Because Janie chooses to be silent, that is what gets her through the end of the marriage when Joe passes away.

Janie learns through the novel that silence brings her peace in her first two marriages. With Tea Cake, she finds happiness and joy and finally feels that she can be herself unlike her relationship with Joe. She finally finds what it feels like to love someone very deeply. After Tea Cake’s death, Janie is able to find peace because she has loved unlike others, and continues to remain silent to those that wouldn’t understand.

The Role of Silence. (2021, Apr 24). Retrieved from https://papersowl.com/examples/the-role-of-silence/