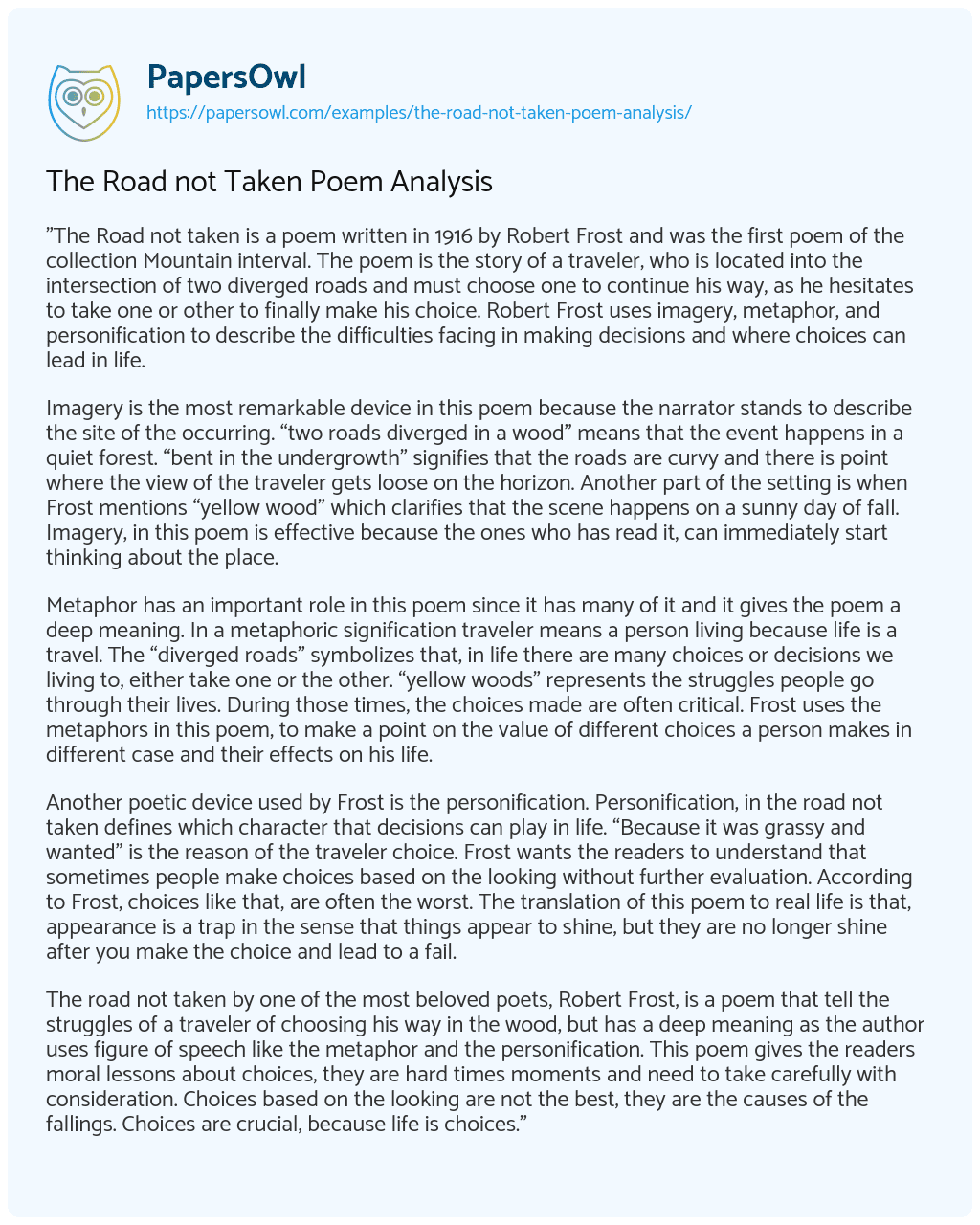 “The Road not taken is a poem written in 1916 by Robert Frost and was the first poem of the collection Mountain interval. The poem is the story of a traveler, who is located into the intersection of two diverged roads and must choose one to continue his way, as he hesitates to take one or other to finally make his choice. Robert Frost uses imagery, metaphor, and personification to describe the difficulties facing in making decisions and where choices can lead in life.

Imagery is the most remarkable device in this poem because the narrator stands to describe the site of the occurring. “two roads diverged in a wood” means that the event happens in a quiet forest. “bent in the undergrowth” signifies that the roads are curvy and there is point where the view of the traveler gets loose on the horizon. Another part of the setting is when Frost mentions “yellow wood” which clarifies that the scene happens on a sunny day of fall. Imagery, in this poem is effective because the ones who has read it, can immediately start thinking about the place.

Metaphor has an important role in this poem since it has many of it and it gives the poem a deep meaning. In a metaphoric signification traveler means a person living because life is a travel. The “diverged roads” symbolizes that, in life there are many choices or decisions we living to, either take one or the other. “yellow woods” represents the struggles people go through their lives. During those times, the choices made are often critical. Frost uses the metaphors in this poem, to make a point on the value of different choices a person makes in different case and their effects on his life.

Another poetic device used by Frost is the personification. Personification, in the road not taken defines which character that decisions can play in life. “Because it was grassy and wanted” is the reason of the traveler choice. Frost wants the readers to understand that sometimes people make choices based on the looking without further evaluation. According to Frost, choices like that, are often the worst. The translation of this poem to real life is that, appearance is a trap in the sense that things appear to shine, but they are no longer shine after you make the choice and lead to a fail.

The road not taken by one of the most beloved poets, Robert Frost, is a poem that tell the struggles of a traveler of choosing his way in the wood, but has a deep meaning as the author uses figure of speech like the metaphor and the personification. This poem gives the readers moral lessons about choices, they are hard times moments and need to take carefully with consideration. Choices based on the looking are not the best, they are the causes of the fallings. Choices are crucial, because life is choices.”

The Road not Taken Poem Analysis. (2021, Apr 24). Retrieved from https://papersowl.com/examples/the-road-not-taken-poem-analysis/

Frost’s Poem the Road not Taken