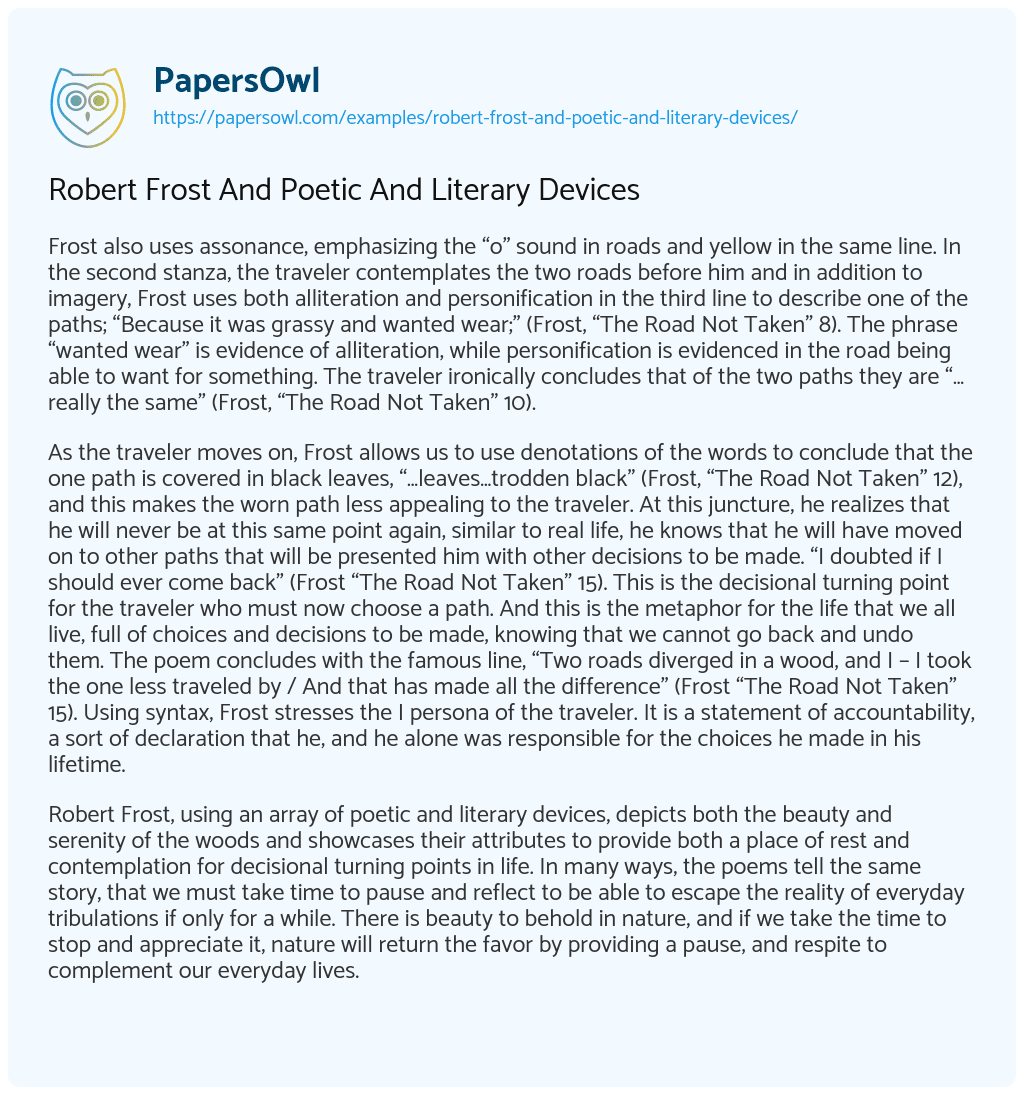 Frost also uses assonance, emphasizing the “o” sound in roads and yellow in the same line. In the second stanza, the traveler contemplates the two roads before him and in addition to imagery, Frost uses both alliteration and personification in the third line to describe one of the paths; “Because it was grassy and wanted wear;” (Frost, “The Road Not Taken” 8). The phrase “wanted wear” is evidence of alliteration, while personification is evidenced in the road being able to want for something. The traveler ironically concludes that of the two paths they are “…really the same” (Frost, “The Road Not Taken” 10).

As the traveler moves on, Frost allows us to use denotations of the words to conclude that the one path is covered in black leaves, “…leaves…trodden black” (Frost, “The Road Not Taken” 12), and this makes the worn path less appealing to the traveler. At this juncture, he realizes that he will never be at this same point again, similar to real life, he knows that he will have moved on to other paths that will be presented him with other decisions to be made. “I doubted if I should ever come back” (Frost “The Road Not Taken” 15). This is the decisional turning point for the traveler who must now choose a path. And this is the metaphor for the life that we all live, full of choices and decisions to be made, knowing that we cannot go back and undo them. The poem concludes with the famous line, “Two roads diverged in a wood, and I – I took the one less traveled by / And that has made all the difference” (Frost “The Road Not Taken” 15). Using syntax, Frost stresses the I persona of the traveler. It is a statement of accountability, a sort of declaration that he, and he alone was responsible for the choices he made in his lifetime.

Robert Frost, using an array of poetic and literary devices, depicts both the beauty and serenity of the woods and showcases their attributes to provide both a place of rest and contemplation for decisional turning points in life. In many ways, the poems tell the same story, that we must take time to pause and reflect to be able to escape the reality of everyday tribulations if only for a while. There is beauty to behold in nature, and if we take the time to stop and appreciate it, nature will return the favor by providing a pause, and respite to complement our everyday lives.