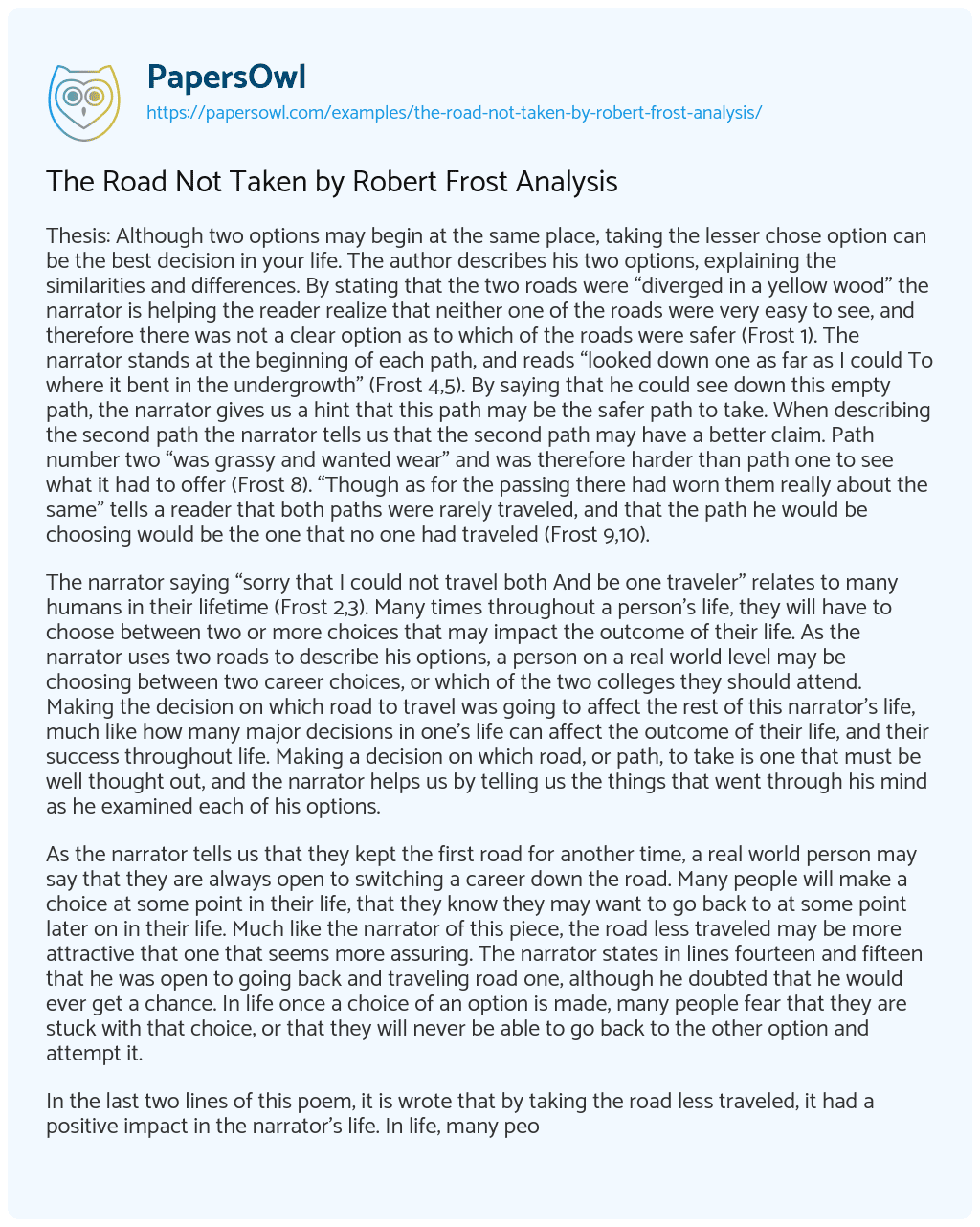 Thesis: Although two options may begin at the same place, taking the lesser chose option can be the best decision in your life. The author describes his two options, explaining the similarities and differences. By stating that the two roads were “diverged in a yellow wood” the narrator is helping the reader realize that neither one of the roads were very easy to see, and therefore there was not a clear option as to which of the roads were safer (Frost 1). The narrator stands at the beginning of each path, and reads “looked down one as far as I could To where it bent in the undergrowth” (Frost 4,5). By saying that he could see down this empty path, the narrator gives us a hint that this path may be the safer path to take. When describing the second path the narrator tells us that the second path may have a better claim. Path number two “was grassy and wanted wear” and was therefore harder than path one to see what it had to offer (Frost 8). “Though as for the passing there had worn them really about the same” tells a reader that both paths were rarely traveled, and that the path he would be choosing would be the one that no one had traveled (Frost 9,10).

The narrator saying “sorry that I could not travel both And be one traveler” relates to many humans in their lifetime (Frost 2,3). Many times throughout a person’s life, they will have to choose between two or more choices that may impact the outcome of their life. As the narrator uses two roads to describe his options, a person on a real world level may be choosing between two career choices, or which of the two colleges they should attend. Making the decision on which road to travel was going to affect the rest of this narrator’s life, much like how many major decisions in one’s life can affect the outcome of their life, and their success throughout life. Making a decision on which road, or path, to take is one that must be well thought out, and the narrator helps us by telling us the things that went through his mind as he examined each of his options.

As the narrator tells us that they kept the first road for another time, a real world person may say that they are always open to switching a career down the road. Many people will make a choice at some point in their life, that they know they may want to go back to at some point later on in their life. Much like the narrator of this piece, the road less traveled may be more attractive that one that seems more assuring. The narrator states in lines fourteen and fifteen that he was open to going back and traveling road one, although he doubted that he would ever get a chance. In life once a choice of an option is made, many people fear that they are stuck with that choice, or that they will never be able to go back to the other option and attempt it.

In the last two lines of this poem, it is wrote that by taking the road less traveled, it had a positive impact in the narrator’s life. In life, many people tend to follow in the path of others and end up being just another human on Earth. When taking big risk, and taking paths that no one else has ever taken, you put yourself in a position to become more successful in life, or to give your life a better outcome. In this poem, the narrator taking the road less traveled made a big difference in his life. For example many people would like to become doctors, but most just perform the same basic procedures. The doctors that go their own way to learn new procedures, and to solve different problems are those who get the most recognition and the ones that make the most money. Although it is hard, those doctors go out on their own to try to do someone no one else has ever done. It does not always pay off, the narrators road could have taking him to the edge of a cliff, but by taking those chances you have the chance to become something better than average.

By taking the road less traveled, or the path less common you have the chance to make the best decision of your life. When examining your options in life, look closely, and notice which paths have already been discovered. By choosing the option that seems less common, or a little bit more difficult you can put yourself into position to be something above average, and different than normal. Choosing the road less traveled can be the best decision of your life.

The Road Not Taken by Robert Frost Analysis. (2021, Apr 29). Retrieved from https://papersowl.com/examples/the-road-not-taken-by-robert-frost-analysis/