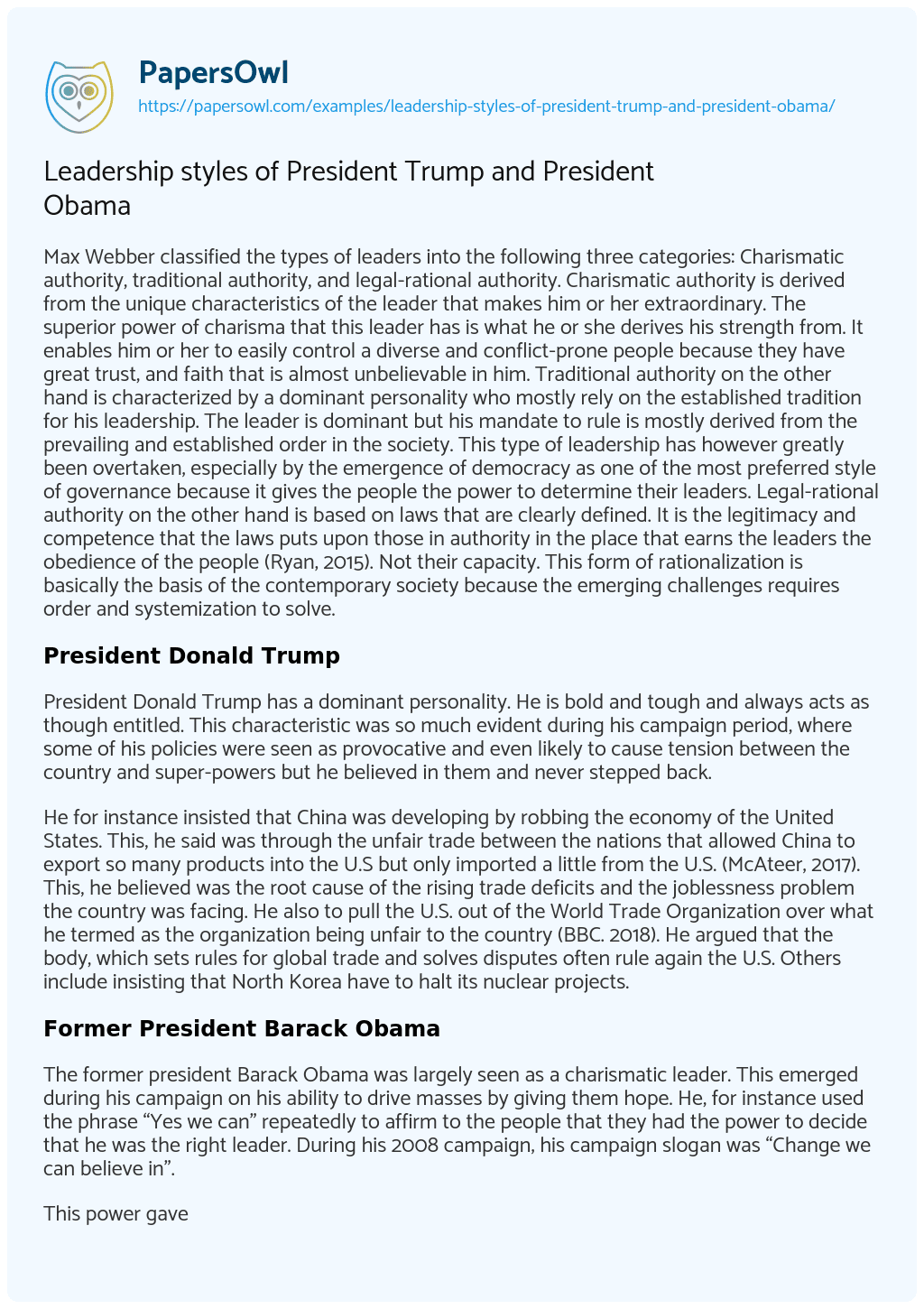 Max Webber classified the types of leaders into the following three categories: Charismatic authority, traditional authority, and legal-rational authority. Charismatic authority is derived from the unique characteristics of the leader that makes him or her extraordinary. The superior power of charisma that this leader has is what he or she derives his strength from. It enables him or her to easily control a diverse and conflict-prone people because they have great trust, and faith that is almost unbelievable in him. Traditional authority on the other hand is characterized by a dominant personality who mostly rely on the established tradition for his leadership. The leader is dominant but his mandate to rule is mostly derived from the prevailing and established order in the society. This type of leadership has however greatly been overtaken, especially by the emergence of democracy as one of the most preferred style of governance because it gives the people the power to determine their leaders. Legal-rational authority on the other hand is based on laws that are clearly defined. It is the legitimacy and competence that the laws puts upon those in authority in the place that earns the leaders the obedience of the people (Ryan, 2015). Not their capacity. This form of rationalization is basically the basis of the contemporary society because the emerging challenges requires order and systemization to solve.

President Donald Trump has a dominant personality. He is bold and tough and always acts as though entitled. This characteristic was so much evident during his campaign period, where some of his policies were seen as provocative and even likely to cause tension between the country and super-powers but he believed in them and never stepped back.

He for instance insisted that China was developing by robbing the economy of the United States. This, he said was through the unfair trade between the nations that allowed China to export so many products into the U.S but only imported a little from the U.S. (McAteer, 2017). This, he believed was the root cause of the rising trade deficits and the joblessness problem the country was facing. He also to pull the U.S. out of the World Trade Organization over what he termed as the organization being unfair to the country (BBC. 2018). He argued that the body, which sets rules for global trade and solves disputes often rule again the U.S. Others include insisting that North Korea have to halt its nuclear projects.

The former president Barack Obama was largely seen as a charismatic leader. This emerged during his campaign on his ability to drive masses by giving them hope. He, for instance used the phrase “Yes we can” repeatedly to affirm to the people that they had the power to decide that he was the right leader. During his 2008 campaign, his campaign slogan was “Change we can believe in”.

This power gave him the ability to rally voters of all races to vote for him overwhelmingly in a country that was historically seen to be politically divided across racial lines. This made him the first black President in the state. He was also re-elected for a second term, still because of his charisma.

DuBois in his concept of double consciousness wanted a situation whereby a person could both be a Negro and an American without being subjected to racial prejudice in the society that was predominantly White. After the abolition of the slave trade, the African Americans still remained lost in the American society because racism remained prevalent and this denied them the opportunity to progress.

I feel that DuBois would criticize President Donald Trump’s racial consciousness. This is because of his tough immigration policies. He for instance threatened to end the Deferred Action for Childhood Arrivals (DACA) program that allowed several young adult immigrants to live in the U.S. as a way of giving them a chance to build their lives. Putting an end to the program would mean that several young adults that are protected by it will have to be deported for being unauthorized immigrants. Such an act is largely expected to affect the people of color and can be viewed as an act of racism. DuBois wanted a society where opportunities would be equal for all and abolishing DACA works against it.

President Obama on the other hand would be judged favorably by DuBois in terms of racial consciousness. It was during his term (2012) that the DACA was enacted, with an aim of giving the less privileged young adults from different backgrounds to build a life of success in the American society.

Is Donald Trump a Good President?

President Donald Trump and his Politics

Donald Trump’s Impact on the US Economy