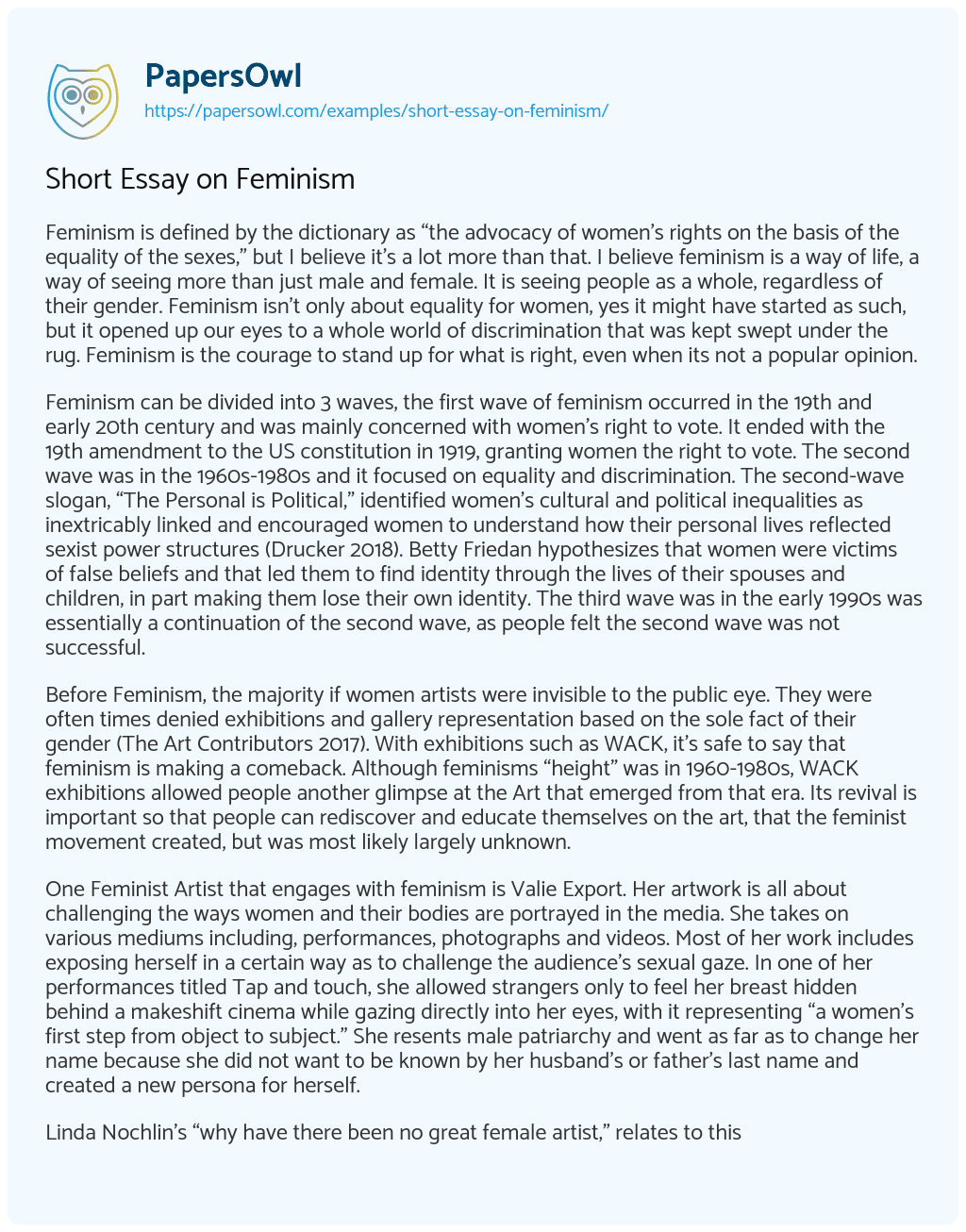 Feminism is defined by the dictionary as “the advocacy of women’s rights on the basis of the equality of the sexes,” but I believe it’s a lot more than that. I believe feminism is a way of life, a way of seeing more than just male and female. It is seeing people as a whole, regardless of their gender. Feminism isn’t only about equality for women, yes it might have started as such, but it opened up our eyes to a whole world of discrimination that was kept swept under the rug. Feminism is the courage to stand up for what is right, even when its not a popular opinion.

Feminism can be divided into 3 waves, the first wave of feminism occurred in the 19th and early 20th century and was mainly concerned with women’s right to vote. It ended with the 19th amendment to the US constitution in 1919, granting women the right to vote. The second wave was in the 1960s-1980s and it focused on equality and discrimination. The second-wave slogan, “The Personal is Political,” identified women’s cultural and political inequalities as inextricably linked and encouraged women to understand how their personal lives reflected sexist power structures (Drucker 2018). Betty Friedan hypothesizes that women were victims of false beliefs and that led them to find identity through the lives of their spouses and children, in part making them lose their own identity. The third wave was in the early 1990s was essentially a continuation of the second wave, as people felt the second wave was not successful.

Before Feminism, the majority if women artists were invisible to the public eye. They were often times denied exhibitions and gallery representation based on the sole fact of their gender (The Art Contributors 2017). With exhibitions such as WACK, it’s safe to say that feminism is making a comeback. Although feminisms “height” was in 1960-1980s, WACK exhibitions allowed people another glimpse at the Art that emerged from that era. Its revival is important so that people can rediscover and educate themselves on the art, that the feminist movement created, but was most likely largely unknown.

One Feminist Artist that engages with feminism is Valie Export. Her artwork is all about challenging the ways women and their bodies are portrayed in the media. She takes on various mediums including, performances, photographs and videos. Most of her work includes exposing herself in a certain way as to challenge the audience’s sexual gaze. In one of her performances titled Tap and touch, she allowed strangers only to feel her breast hidden behind a makeshift cinema while gazing directly into her eyes, with it representing “a women’s first step from object to subject.” She resents male patriarchy and went as far as to change her name because she did not want to be known by her husband’s or father’s last name and created a new persona for herself.

Linda Nochlin’s “why have there been no great female artist,” relates to this discussion and feminism in the sense that it wasn’t a lack of great female artists that was an issue, but the fact that it took an entire feminist movement to bring them to light. They have always been there, but their gender, their race, and even their social status kept them from being celebrated, even when they were on par with another famous artist such as Michelangelo. Feminism isn’t only about empowering women, take for example the article “How a Fractious Women’s movement came to lead the left.” It shows just how powerful feminism can be, what started out as a women’s march grew into an enormous march for rights for everyone and a general sense to be heard. Although they considered themselves feminists, the marchers, marched for everything from refugees, to rape culture, to abortion and even to protest the president. Feminism gives everyone an outlet to be heard regardless of gender.