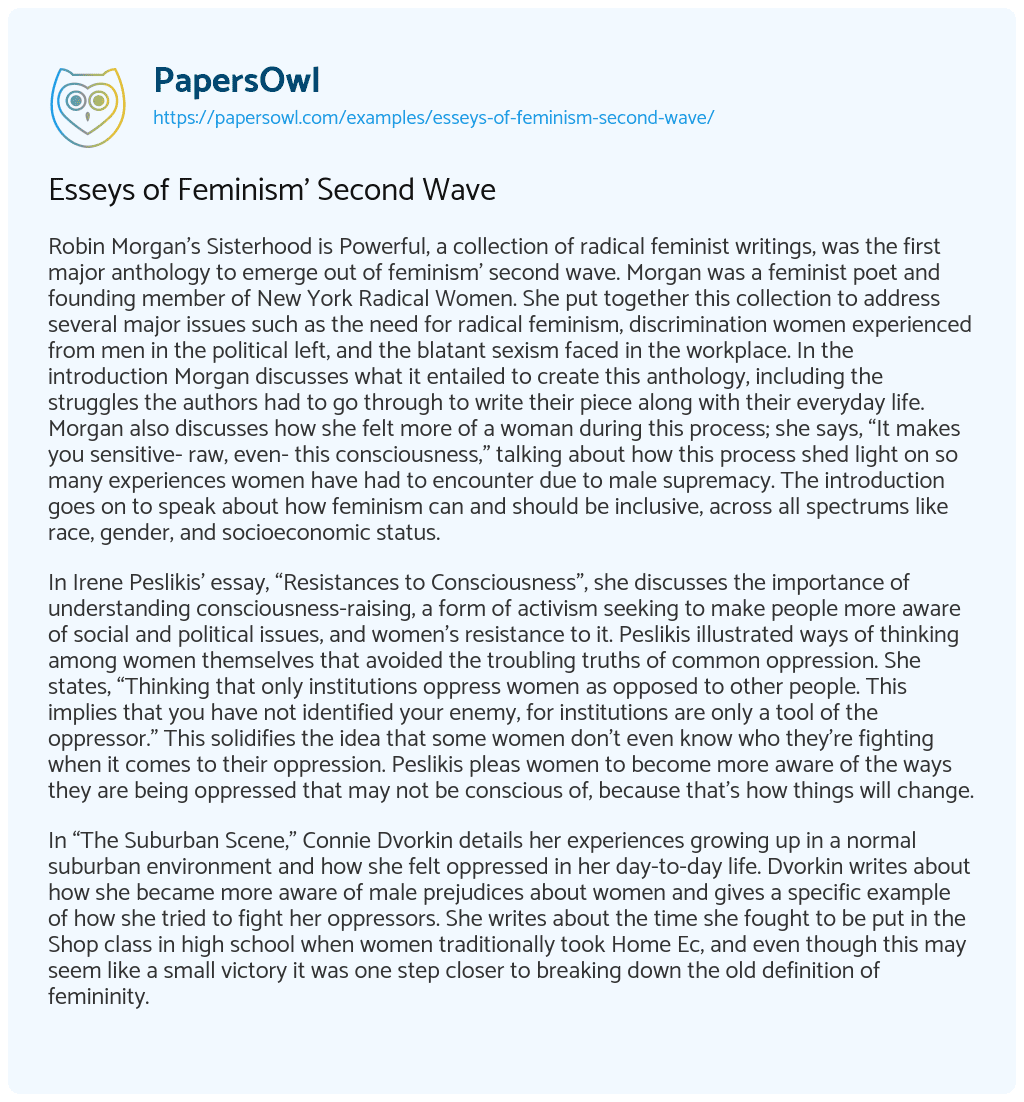 Robin Morgan’s Sisterhood is Powerful, a collection of radical feminist writings, was the first major anthology to emerge out of feminism’ second wave. Morgan was a feminist poet and founding member of New York Radical Women. She put together this collection to address several major issues such as the need for radical feminism, discrimination women experienced from men in the political left, and the blatant sexism faced in the workplace. In the introduction Morgan discusses what it entailed to create this anthology, including the struggles the authors had to go through to write their piece along with their everyday life. Morgan also discusses how she felt more of a woman during this process; she says, “It makes you sensitive- raw, even- this consciousness,” talking about how this process shed light on so many experiences women have had to encounter due to male supremacy. The introduction goes on to speak about how feminism can and should be inclusive, across all spectrums like race, gender, and socioeconomic status.

In Irene Peslikis’ essay, “Resistances to Consciousness”, she discusses the importance of understanding consciousness-raising, a form of activism seeking to make people more aware of social and political issues, and women’s resistance to it. Peslikis illustrated ways of thinking among women themselves that avoided the troubling truths of common oppression. She states, “Thinking that only institutions oppress women as opposed to other people. This implies that you have not identified your enemy, for institutions are only a tool of the oppressor.” This solidifies the idea that some women don’t even know who they’re fighting when it comes to their oppression. Peslikis pleas women to become more aware of the ways they are being oppressed that may not be conscious of, because that’s how things will change.

In “The Suburban Scene,” Connie Dvorkin details her experiences growing up in a normal suburban environment and how she felt oppressed in her day-to-day life. Dvorkin writes about how she became more aware of male prejudices about women and gives a specific example of how she tried to fight her oppressors. She writes about the time she fought to be put in the Shop class in high school when women traditionally took Home Ec, and even though this may seem like a small victory it was one step closer to breaking down the old definition of femininity.