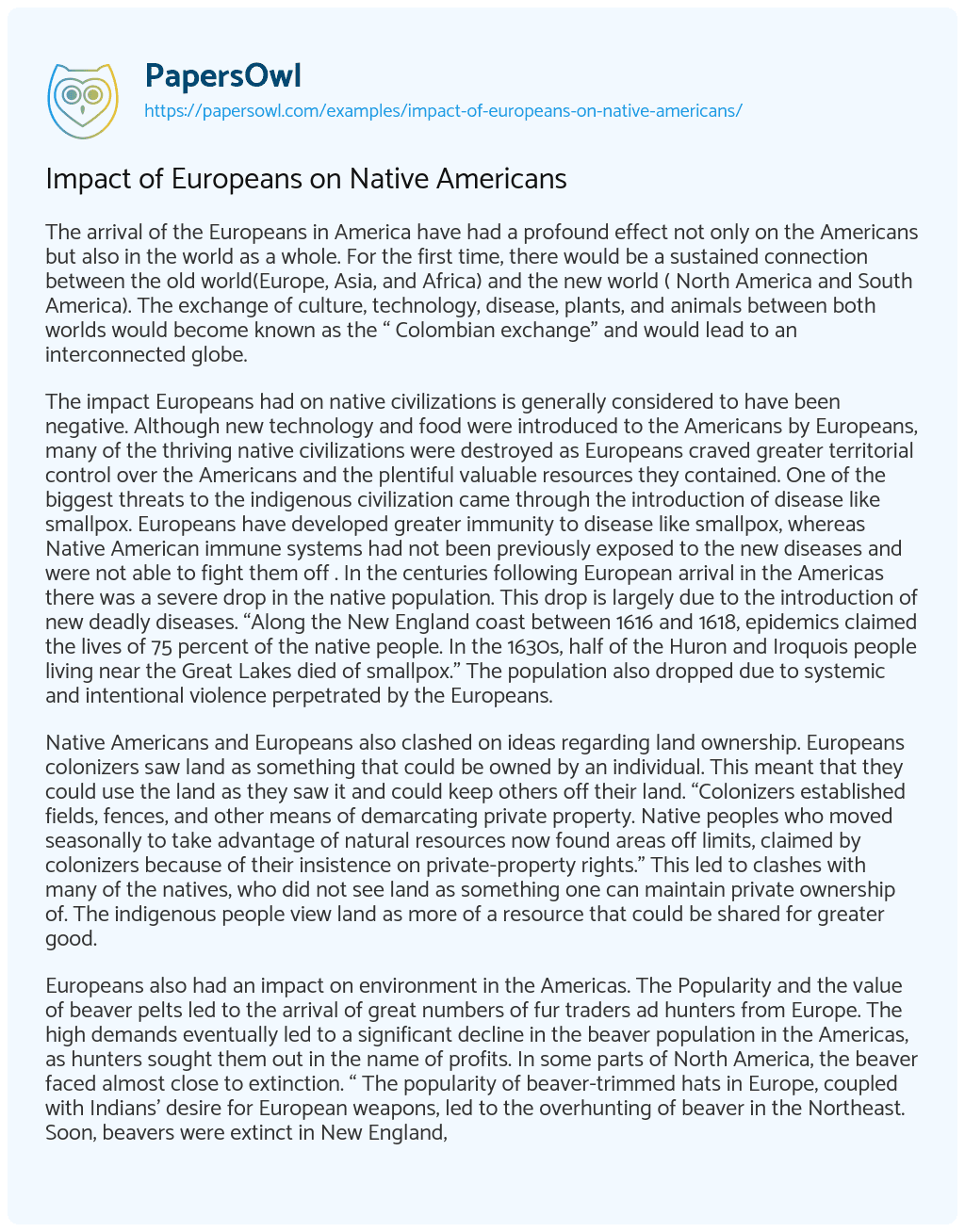 The arrival of the Europeans in America have had a profound effect not only on the Americans but also in the world as a whole. For the first time, there would be a sustained connection between the old world(Europe, Asia, and Africa) and the new world ( North America and South America). The exchange of culture, technology, disease, plants, and animals between both worlds would become known as the “ Colombian exchange” and would lead to an interconnected globe.

The impact Europeans had on native civilizations is generally considered to have been negative. Although new technology and food were introduced to the Americans by Europeans, many of the thriving native civilizations were destroyed as Europeans craved greater territorial control over the Americans and the plentiful valuable resources they contained. One of the biggest threats to the indigenous civilization came through the introduction of disease like smallpox. Europeans have developed greater immunity to disease like smallpox, whereas Native American immune systems had not been previously exposed to the new diseases and were not able to fight them off . In the centuries following European arrival in the Americas there was a severe drop in the native population. This drop is largely due to the introduction of new deadly diseases. “Along the New England coast between 1616 and 1618, epidemics claimed the lives of 75 percent of the native people. In the 1630s, half of the Huron and Iroquois people living near the Great Lakes died of smallpox.” The population also dropped due to systemic and intentional violence perpetrated by the Europeans.

Native Americans and Europeans also clashed on ideas regarding land ownership. Europeans colonizers saw land as something that could be owned by an individual. This meant that they could use the land as they saw it and could keep others off their land. “Colonizers established fields, fences, and other means of demarcating private property. Native peoples who moved seasonally to take advantage of natural resources now found areas off limits, claimed by colonizers because of their insistence on private-property rights.” This led to clashes with many of the natives, who did not see land as something one can maintain private ownership of. The indigenous people view land as more of a resource that could be shared for greater good.

Europeans also had an impact on environment in the Americas. The Popularity and the value of beaver pelts led to the arrival of great numbers of fur traders ad hunters from Europe. The high demands eventually led to a significant decline in the beaver population in the Americas, as hunters sought them out in the name of profits. In some parts of North America, the beaver faced almost close to extinction. “ The popularity of beaver-trimmed hats in Europe, coupled with Indians’ desire for European weapons, led to the overhunting of beaver in the Northeast. Soon, beavers were extinct in New England, New York, and other areas. With their loss came the loss of beaver ponds, which had served as habitats for fish as well as water sources for deer, moose, and other animals. Furthermore, Europeans introduced pigs, which they allowed to forage in forests and other wild lands.” The loss of the beaver which was a key part of the ecosystem led to decrease the populations of other creatures that relied on the beaver for their own survival.

Europeans also found the environment to the Americas suitable for certain cash crops which they struggled to develop in Europe. “ Columbus brought sugarcane to the Caribbean on his second voyage from Spain in 1493, and thereafter a wide variety of other herbs, flowers, seeds, and roots.” Tobacco, cotton, and sugar became central factors in making European colonization profitable. New plant-based foods would also be introduced to Europe from the Americas. Staple foods, such as potatoes, tomatoes, corn, and peanuts, which were native to the new world would be introduced and become popular in Europe.

Impact of Europeans on Native Americans. (2021, May 17). Retrieved from https://papersowl.com/examples/impact-of-europeans-on-native-americans/

Were Native Americans Defeated by Colonization or by Disease?

Marxism in Relation to Native Americans