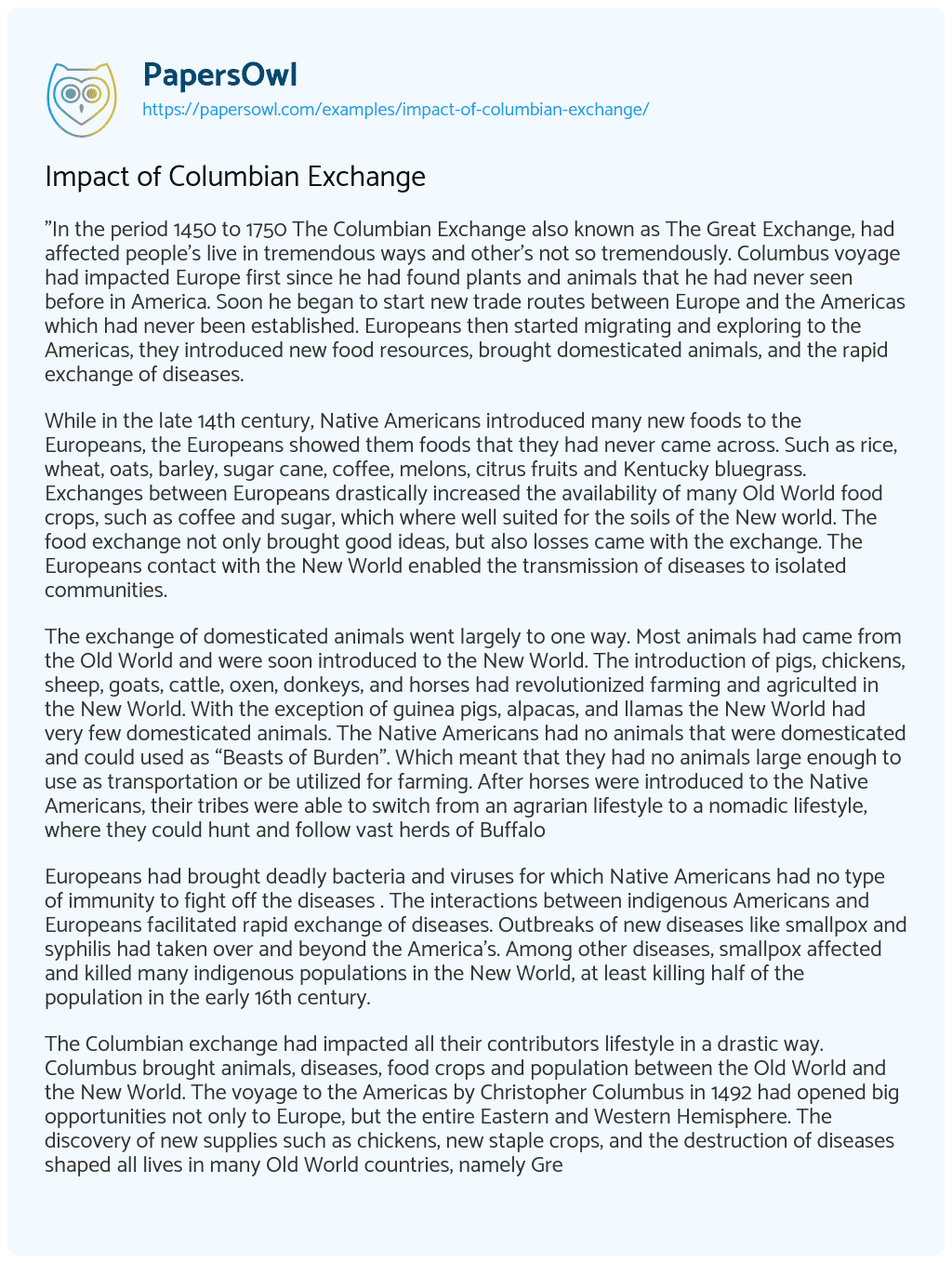 “In the period 1450 to 1750 The Columbian Exchange also known as The Great Exchange, had affected people’s live in tremendous ways and other’s not so tremendously. Columbus voyage had impacted Europe first since he had found plants and animals that he had never seen before in America. Soon he began to start new trade routes between Europe and the Americas which had never been established. Europeans then started migrating and exploring to the Americas, they introduced new food resources, brought domesticated animals, and the rapid exchange of diseases.

While in the late 14th century, Native Americans introduced many new foods to the Europeans, the Europeans showed them foods that they had never came across. Such as rice, wheat, oats, barley, sugar cane, coffee, melons, citrus fruits and Kentucky bluegrass. Exchanges between Europeans drastically increased the availability of many Old World food crops, such as coffee and sugar, which where well suited for the soils of the New world. The food exchange not only brought good ideas, but also losses came with the exchange. The Europeans contact with the New World enabled the transmission of diseases to isolated communities.

The exchange of domesticated animals went largely to one way. Most animals had came from the Old World and were soon introduced to the New World. The introduction of pigs, chickens, sheep, goats, cattle, oxen, donkeys, and horses had revolutionized farming and agriculted in the New World. With the exception of guinea pigs, alpacas, and llamas the New World had very few domesticated animals. The Native Americans had no animals that were domesticated and could used as “Beasts of Burden”. Which meant that they had no animals large enough to use as transportation or be utilized for farming. After horses were introduced to the Native Americans, their tribes were able to switch from an agrarian lifestyle to a nomadic lifestyle, where they could hunt and follow vast herds of Buffalo

Europeans had brought deadly bacteria and viruses for which Native Americans had no type of immunity to fight off the diseases . The interactions between indigenous Americans and Europeans facilitated rapid exchange of diseases. Outbreaks of new diseases like smallpox and syphilis had taken over and beyond the America’s. Among other diseases, smallpox affected and killed many indigenous populations in the New World, at least killing half of the population in the early 16th century.

The Columbian exchange had impacted all their contributors lifestyle in a drastic way. Columbus brought animals, diseases, food crops and population between the Old World and the New World. The voyage to the Americas by Christopher Columbus in 1492 had opened big opportunities not only to Europe, but the entire Eastern and Western Hemisphere. The discovery of new supplies such as chickens, new staple crops, and the destruction of diseases shaped all lives in many Old World countries, namely Greece, Italy, India, Korea, Hungary, and other Mediterranean countries.”

Impact of Columbian Exchange. (2021, May 24). Retrieved from https://papersowl.com/examples/impact-of-columbian-exchange/