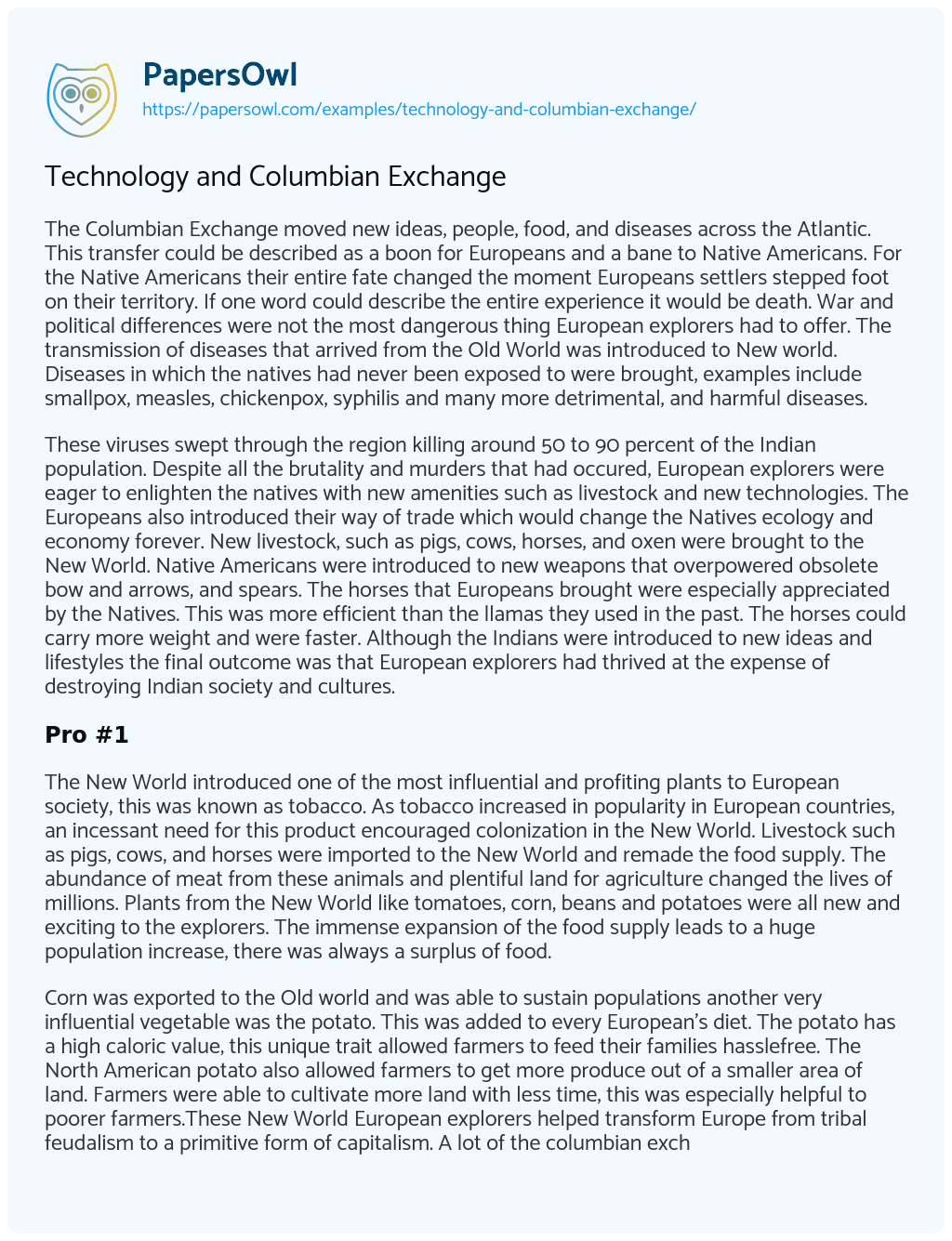 The Columbian Exchange moved new ideas, people, food, and diseases across the Atlantic. This transfer could be described as a boon for Europeans and a bane to Native Americans. For the Native Americans their entire fate changed the moment Europeans settlers stepped foot on their territory. If one word could describe the entire experience it would be death. War and political differences were not the most dangerous thing European explorers had to offer. The transmission of diseases that arrived from the Old World was introduced to New world. Diseases in which the natives had never been exposed to were brought, examples include smallpox, measles, chickenpox, syphilis and many more detrimental, and harmful diseases.

These viruses swept through the region killing around 50 to 90 percent of the Indian population. Despite all the brutality and murders that had occured, European explorers were eager to enlighten the natives with new amenities such as livestock and new technologies. The Europeans also introduced their way of trade which would change the Natives ecology and economy forever. New livestock, such as pigs, cows, horses, and oxen were brought to the New World. Native Americans were introduced to new weapons that overpowered obsolete bow and arrows, and spears. The horses that Europeans brought were especially appreciated by the Natives. This was more efficient than the llamas they used in the past. The horses could carry more weight and were faster. Although the Indians were introduced to new ideas and lifestyles the final outcome was that European explorers had thrived at the expense of destroying Indian society and cultures.

The New World introduced one of the most influential and profiting plants to European society, this was known as tobacco. As tobacco increased in popularity in European countries, an incessant need for this product encouraged colonization in the New World. Livestock such as pigs, cows, and horses were imported to the New World and remade the food supply. The abundance of meat from these animals and plentiful land for agriculture changed the lives of millions. Plants from the New World like tomatoes, corn, beans and potatoes were all new and exciting to the explorers. The immense expansion of the food supply leads to a huge population increase, there was always a surplus of food.

Corn was exported to the Old world and was able to sustain populations another very influential vegetable was the potato. This was added to every European’s diet. The potato has a high caloric value, this unique trait allowed farmers to feed their families hasslefree. The North American potato also allowed farmers to get more produce out of a smaller area of land. Farmers were able to cultivate more land with less time, this was especially helpful to poorer farmers.These New World European explorers helped transform Europe from tribal feudalism to a primitive form of capitalism. A lot of the columbian exchange was only beneficial to European explorers who were discovering all the new commodities the New World had to offer. These new goods and items gave yet even more reasons for exploration and colonization during this time.

During the 15th and 16th century there was a rising number of new religious movement groups appearing throughout the American colonies. There were mass amounts of hostility towards religious groups that did not fully support the Church of England. This caused lots of conflict for these newly formed groups, they all wanted their own home to settle upon and be free to practice their religions. Amongst all the different groups there were the Puritans. They were a group of protestant christians who wanted to “purify” some of the practices. Puritans desired to reform towards the Church of England, they believed the Church had become corrupt and they criticized them.

They were unhappy with the king and wanted to worship in their own way, they sought out for religious freedom. They also wanted to set an example for other groups to follow. The other group were Separatists who were also Puritans except these people wanted to completely leave the church in order to pursue their own denominations, they wanted to completely break away from the corruption and start their own religion. Protestants believed that separatists were threats in England and were persecuted. So separatists left to Holland and were accepted by the Dutch people, but they did not want to absorbed into that culture. To address these problems they came up with The Mayflower Compact. They wanted their own place where they could practice their own religion outside of bad influences. Both these groups fled to America and found themselves in Massachusetts. The next group were the Quakers they were pacifists, who had rights for womens. They had religious toleration for many different religions. They were not accepted by other religious groups and were imprisoned or banished from New England.

The Separitists gained their own sense of independence before any other group. They constructed the Mayflower Compact, this document set certain rules and laws that these pilgrims all agreed too. They were trying to escape prosecution from the Church of England.