The Roots of Social Media 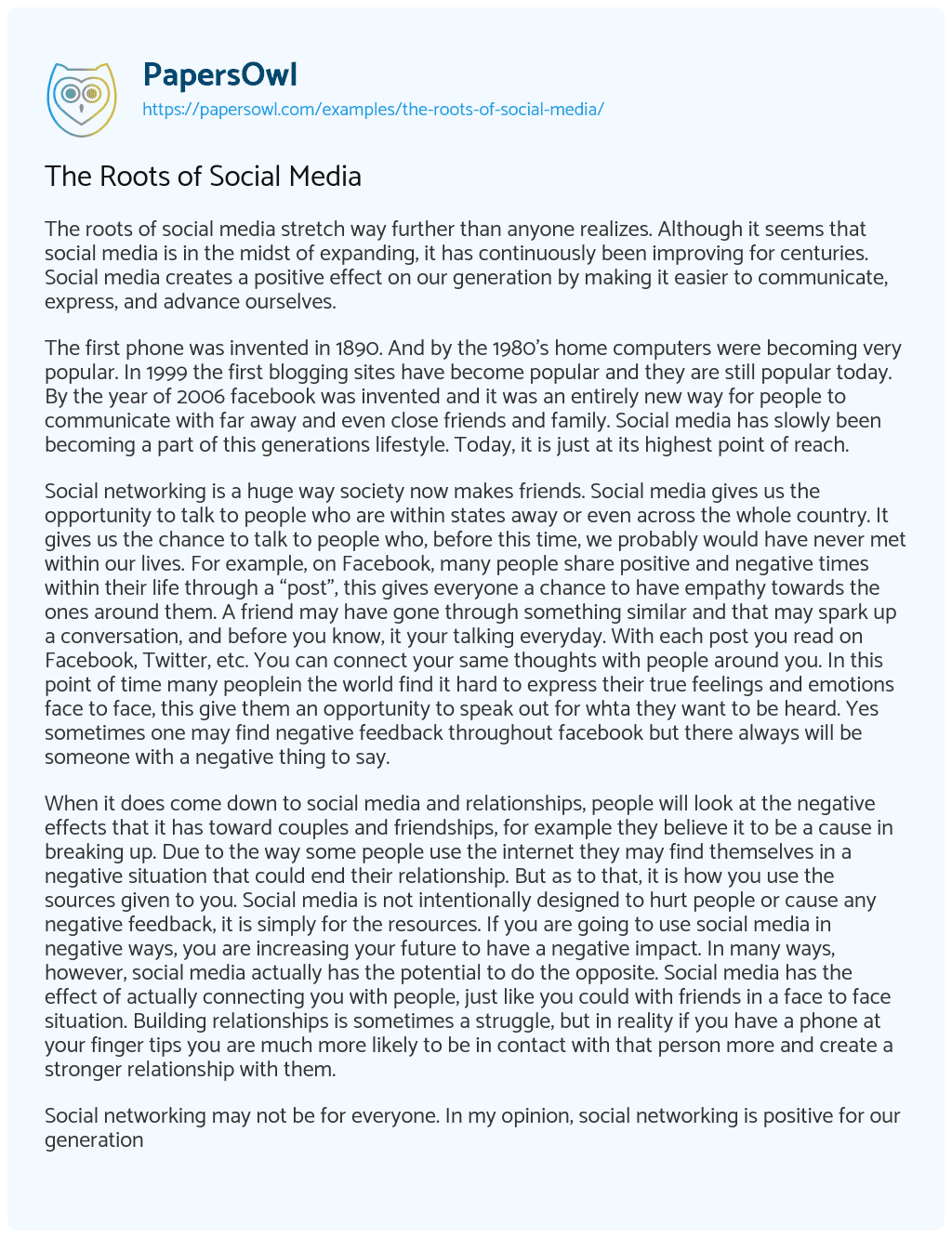 The roots of social media stretch way further than anyone realizes. Although it seems that social media is in the midst of expanding, it has continuously been improving for centuries. Social media creates a positive effect on our generation by making it easier to communicate, express, and advance ourselves.

The first phone was invented in 1890. And by the 1980’s home computers were becoming very popular. In 1999 the first blogging sites have become popular and they are still popular today. By the year of 2006 facebook was invented and it was an entirely new way for people to communicate with far away and even close friends and family. Social media has slowly been becoming a part of this generations lifestyle. Today, it is just at its highest point of reach.

Social networking is a huge way society now makes friends. Social media gives us the opportunity to talk to people who are within states away or even across the whole country. It gives us the chance to talk to people who, before this time, we probably would have never met within our lives. For example, on Facebook, many people share positive and negative times within their life through a “post”, this gives everyone a chance to have empathy towards the ones around them. A friend may have gone through something similar and that may spark up a conversation, and before you know, it your talking everyday. With each post you read on Facebook, Twitter, etc. You can connect your same thoughts with people around you. In this point of time many peoplein the world find it hard to express their true feelings and emotions face to face, this give them an opportunity to speak out for whta they want to be heard. Yes sometimes one may find negative feedback throughout facebook but there always will be someone with a negative thing to say.

When it does come down to social media and relationships, people will look at the negative effects that it has toward couples and friendships, for example they believe it to be a cause in breaking up. Due to the way some people use the internet they may find themselves in a negative situation that could end their relationship. But as to that, it is how you use the sources given to you. Social media is not intentionally designed to hurt people or cause any negative feedback, it is simply for the resources. If you are going to use social media in negative ways, you are increasing your future to have a negative impact. In many ways, however, social media actually has the potential to do the opposite. Social media has the effect of actually connecting you with people, just like you could with friends in a face to face situation. Building relationships is sometimes a struggle, but in reality if you have a phone at your finger tips you are much more likely to be in contact with that person more and create a stronger relationship with them.

Social networking may not be for everyone. In my opinion, social networking is positive for our generation, specifically. It gives humans an opportunity gain insight of the world. My generation has grown up in the reality of internet and social media. Many teens parents/Grandparents barley know how to use social media as far as a instagram or twitter. Growing up with the advantage of social media has a positive impact in our future and puts at a higher risk for more advances in life. Every year electronics are being brought out with higher scales of technology and more things that it may be able to do. Eventually this generation will fall under and not know how to use the cellular devices or the social medias just like we feel our parents and grandparents are unable to do now. As the world grows it is better to have more resources and a smarter technology.

Social Networking is for the make up of relationships, and the posting on social medias, but it has a deeper meaning as well. As the world grows there is a higher crime rate compared to 80 years ago. Because this is happening, parents often want to keep in track with their child as much as they can. Being in college I know my family is worried sick, but with social media having the advances to track and know where I are is pretty safe given this world today. For example, snpachat has a setting where you can turn on your “snap maps”, this advance gives your friends and family the advantage of seeing where you are and at what time you were there. Snapchat also can tell when your sleeping (it knows because you have not opened the app in a certain amount of hours).

Social media advances everyday lives with communication, technological inventions, and self-expression. As with most things in life, social media will have its pros and cons. With that being said, I strongly believe that the moderation of this technology, our teens are able to use it to their advantage. Social media can either be good or evil, it is strictly on how you chose to use it and take part in it.

The Roots of Social Media. (2019, Jan 18). Retrieved from https://papersowl.com/examples/the-roots-of-social-media/

Influence of Social Media on Youth