Freedom of Speech on Social Media 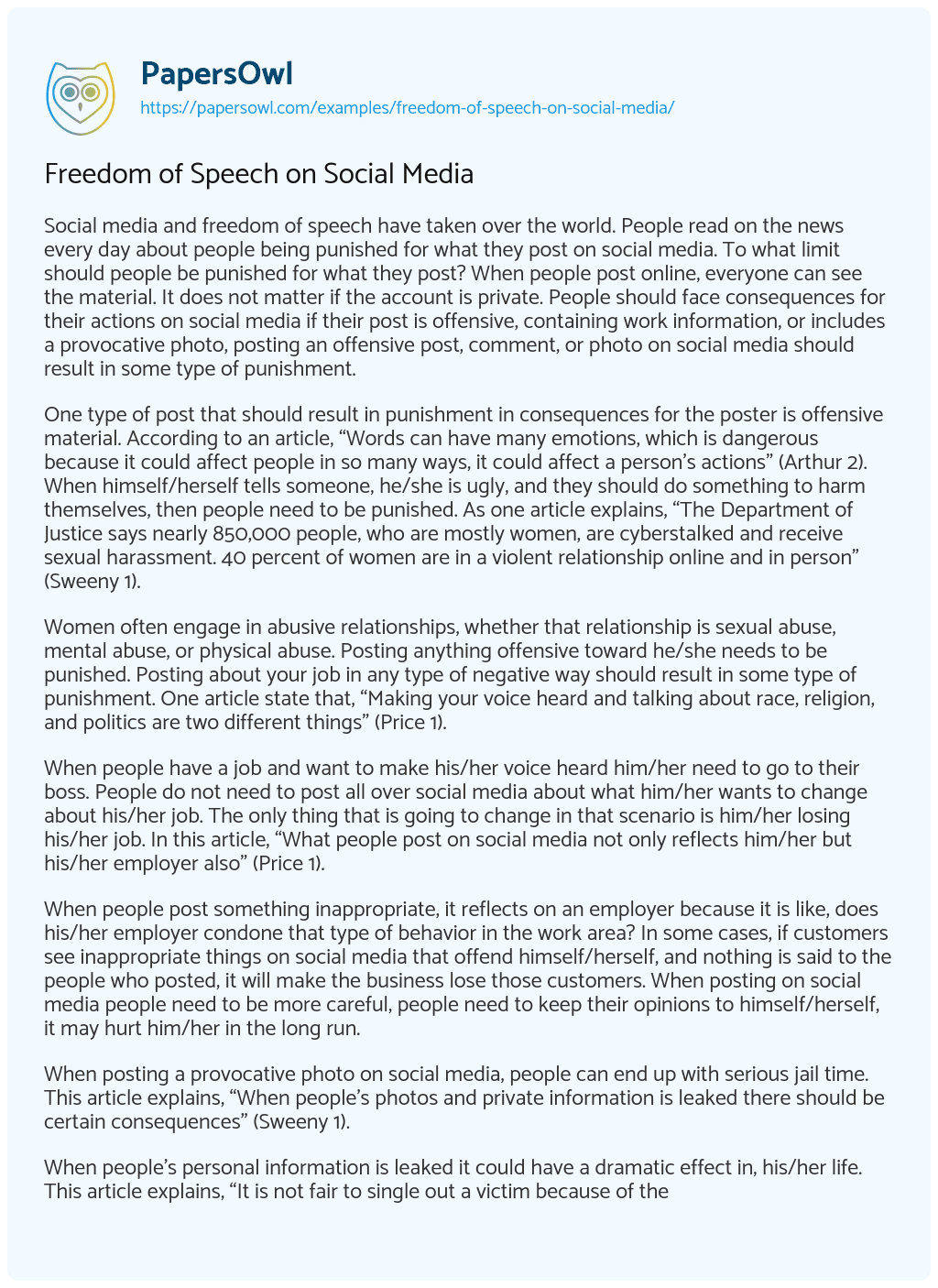 Social media and freedom of speech have taken over the world. People read on the news every day about people being punished for what they post on social media. To what limit should people be punished for what they post? When people post online, everyone can see the material. It does not matter if the account is private. People should face consequences for their actions on social media if their post is offensive, containing work information, or includes a provocative photo, posting an offensive post, comment, or photo on social media should result in some type of punishment.

One type of post that should result in punishment in consequences for the poster is offensive material. According to an article, “Words can have many emotions, which is dangerous because it could affect people in so many ways, it could affect a person’s actions” (Arthur 2). When himself/herself tells someone, he/she is ugly, and they should do something to harm themselves, then people need to be punished. As one article explains, “The Department of Justice says nearly 850,000 people, who are mostly women, are cyberstalked and receive sexual harassment. 40 percent of women are in a violent relationship online and in person” (Sweeny 1).

Women often engage in abusive relationships, whether that relationship is sexual abuse, mental abuse, or physical abuse. Posting anything offensive toward he/she needs to be punished. Posting about your job in any type of negative way should result in some type of punishment. One article state that, “Making your voice heard and talking about race, religion, and politics are two different things” (Price 1).

When people have a job and want to make his/her voice heard him/her need to go to their boss. People do not need to post all over social media about what him/her wants to change about his/her job. The only thing that is going to change in that scenario is him/her losing his/her job. In this article, “What people post on social media not only reflects him/her but his/her employer also” (Price 1).

When people post something inappropriate, it reflects on an employer because it is like, does his/her employer condone that type of behavior in the work area? In some cases, if customers see inappropriate things on social media that offend himself/herself, and nothing is said to the people who posted, it will make the business lose those customers. When posting on social media people need to be more careful, people need to keep their opinions to himself/herself, it may hurt him/her in the long run.

When posting a provocative photo on social media, people can end up with serious jail time. This article explains, “When people’s photos and private information is leaked there should be certain consequences” (Sweeny 1).

When people’s personal information is leaked it could have a dramatic effect in, his/her life. This article explains, “It is not fair to single out a victim because of their gender, race, or sexuality” (Sweeny 5). Women are often sexually assaulted, in most articles’ women are often criticized for provocative photos and explained that the women are “asking for it”.

When people share private information, they are sharing people’s secrets, which is also considered an invasion of privacy. Posting on social media is never private.

When people post online, they are posting for the world to see, if people share things that he/she friends posted, then all of he/she friends can see the post. People’s account may be private, but accounts are never private.

If people go for a job interview and he/she has pictures with his/her friends from the past weekend drunk at a bar, depending on the job, the job is not going to hire he/she for the position. People should face consequences their actions on social media if their post is offensive, containing work information, or includes a provocative photo, posting an offensive post, comment, or photo on social media should result in some type of punishment.

Freedom of Speech on Social Media. (2022, Feb 09). Retrieved from https://papersowl.com/examples/freedom-of-speech-on-social-media/

Proper Use of Social Media