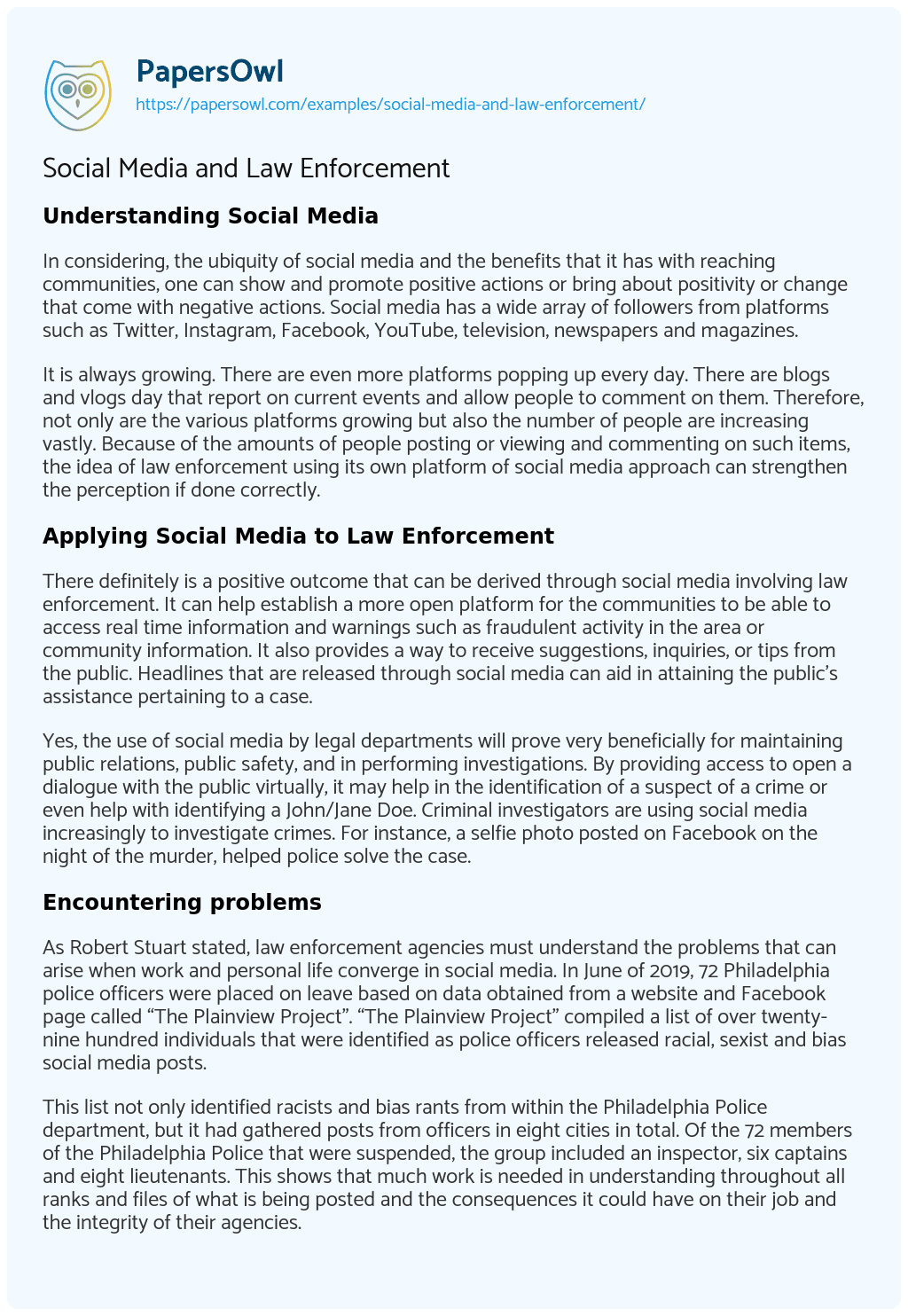 In considering, the ubiquity of social media and the benefits that it has with reaching communities, one can show and promote positive actions or bring about positivity or change that come with negative actions. Social media has a wide array of followers from platforms such as Twitter, Instagram, Facebook, YouTube, television, newspapers and magazines.

It is always growing. There are even more platforms popping up every day. There are blogs and vlogs day that report on current events and allow people to comment on them. Therefore, not only are the various platforms growing but also the number of people are increasing vastly. Because of the amounts of people posting or viewing and commenting on such items, the idea of law enforcement using its own platform of social media approach can strengthen the perception if done correctly.

There definitely is a positive outcome that can be derived through social media involving law enforcement. It can help establish a more open platform for the communities to be able to access real time information and warnings such as fraudulent activity in the area or community information. It also provides a way to receive suggestions, inquiries, or tips from the public. Headlines that are released through social media can aid in attaining the public’s assistance pertaining to a case.

Yes, the use of social media by legal departments will prove very beneficially for maintaining public relations, public safety, and in performing investigations. By providing access to open a dialogue with the public virtually, it may help in the identification of a suspect of a crime or even help with identifying a John/Jane Doe. Criminal investigators are using social media increasingly to investigate crimes. For instance, a selfie photo posted on Facebook on the night of the murder, helped police solve the case.

As Robert Stuart stated, law enforcement agencies must understand the problems that can arise when work and personal life converge in social media. In June of 2019, 72 Philadelphia police officers were placed on leave based on data obtained from a website and Facebook page called “The Plainview Project”. “The Plainview Project” compiled a list of over twenty-nine hundred individuals that were identified as police officers released racial, sexist and bias social media posts.

This list not only identified racists and bias rants from within the Philadelphia Police department, but it had gathered posts from officers in eight cities in total. Of the 72 members of the Philadelphia Police that were suspended, the group included an inspector, six captains and eight lieutenants. This shows that much work is needed in understanding throughout all ranks and files of what is being posted and the consequences it could have on their job and the integrity of their agencies.

Regardless of how they may deem a picture or a post that they’ve seen, it may be offensive to others. Just their sharing and reposting of images or ideas is adequate enough to shed them in a bad light. This brings a spotlight onto their morality and how their interactions with individuals may turn out. Of the 327 Philadelphia officers who posted these insensitive posts, 138 had one or more federal civil right lawsuits filed against them. Nikki Jones, who is an associate professor of African American studies at the University of California says, “This blows up the myth of bad apples, by the sheer number of images and numbers of individuals who are implicated”.

Also posting statements of how they are feeling while at work or pictures of themselves at home or at work could lead to questioning their ability to do their job adequately. For instance, if an officer was posting that he or she was tired while working. Such a thing could cause one to believe that they would be able to fulfill their duty or might not be able to respond quickly enough to avoid something tragic. Releasing personal information of these types may even be used against the officers as evidence.

There is a belief that Law enforcement is abusing their powers in using social media. Criminals often post pictures or statements that tend to lead to their conviction. So, as beneficial as it is to use social media to bring down shortsighted criminals, where is the leverage of law enforcement policing it’s own through social media? It’s common for the police to post a picture of a suspect and ask if you can give the whereabouts of that individual. Recently, they even posted pictures of people caught on video looting. However, you have people questioning whether the police would arrest and identify officers that used tear gas and excessive force on protesters.

In fact, civil rights advocates have been complaining about the police’s monitor social media post over concerns of targeting activists of color

One of the things that was not mentioned in Robert D. Stuart’s article titled “Social Media: Establishing Criteria for Law Enforcement Use.” was about how law enforcement would handle things that were posted by civilians showing misconduct of police in action.

They do not call out this type of behavior enough until something major occurs such as the worldwide protest to George Floyd’s death. David Kennedy, a criminology professor at John Jay College wrote ‘This is the kind of behavior that confirms the worst suspicions on the part of communities about the police,’ Kennedy added that it “fuels and cements” the convictions of people in distressed communities have that the “police are not to be trusted.”

Officers should not be barred from using social media. There is a strong need for more detailed standards of how their pages should be maintained. There is the right of freedom of speech that everyone has; However, it does not allow anyone, including the people who the public depends on their supervision and protection to be able to denigrate, show prejudice, racism, sexism, religious discriminations or even bigotry. In doing so, anyone would do this would strip away the integrity of their self and the departments as well. In 2011, the ICJE survey found that less than 40 percent of the responding agencies had policies regarding social media.  The 2016 IACP survey shown that 80 percent of those responded had social media policies.

The social media policy for the use of the agency’s official platform should emphasize what the purpose is, and the goals are. It should give direction to who(m) has authorization to operate and responsibility for maintaining the social media account. There should be an approval process for posts before they are put out to the public. Furthermore, the policy should address what content will be allowed and what is not allowable. Finally, there should be provisions in the policy that those involved with the social media account goes through a stringent background check and yearly trainings, which includes updates on content that are acceptable and not acceptable, and how to engage with the social media users.

The social media policy for the use of law enforcement personal accounts should bring attention to what content is permissible to share and what is inappropriate. This would include photos & videos, derogatory or inflammatory comments, sharing any media that is controversial or does not stand for the same standards that are sworn to uphold. Sharing any evidence, information on a case, or information on daily duties.

They have increased the amounts of departments that have now developed policies for social media. However, if the goal is to benefit their agencies and reduce turmoil and strife caused by inappropriate use then these policies must be more transparent, have clearer definitions and they must ascertain these rules are being followed and enforced. In conclusion, the opportunity for law enforcement to be able to garner more positive views from the public depends on the ability of these policies to be enacted and adhered to.