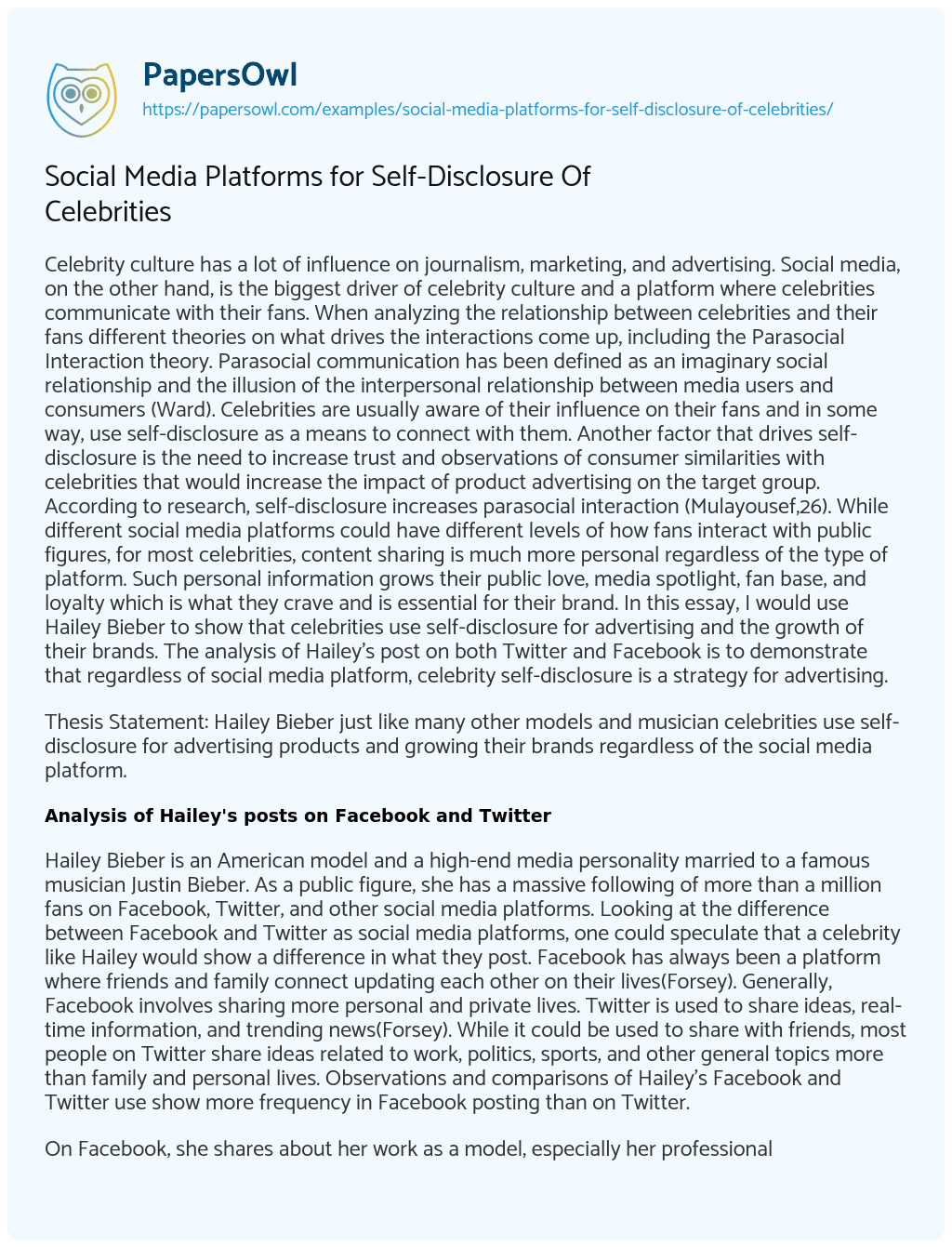 Celebrity culture has a lot of influence on journalism, marketing, and advertising. Social media, on the other hand, is the biggest driver of celebrity culture and a platform where celebrities communicate with their fans. When analyzing the relationship between celebrities and their fans different theories on what drives the interactions come up, including the Parasocial Interaction theory. Parasocial communication has been defined as an imaginary social relationship and the illusion of the interpersonal relationship between media users and consumers (Ward). Celebrities are usually aware of their influence on their fans and in some way, use self-disclosure as a means to connect with them. Another factor that drives self-disclosure is the need to increase trust and observations of consumer similarities with celebrities that would increase the impact of product advertising on the target group. According to research, self-disclosure increases parasocial interaction (Mulayousef,26). While different social media platforms could have different levels of how fans interact with public figures, for most celebrities, content sharing is much more personal regardless of the type of platform. Such personal information grows their public love, media spotlight, fan base, and loyalty which is what they crave and is essential for their brand. In this essay, I would use Hailey Bieber to show that celebrities use self-disclosure for advertising and the growth of their brands. The analysis of Hailey’s post on both Twitter and Facebook is to demonstrate that regardless of social media platform, celebrity self-disclosure is a strategy for advertising.

Thesis Statement: Hailey Bieber just like many other models and musician celebrities use self-disclosure for advertising products and growing their brands regardless of the social media platform.

Hailey Bieber is an American model and a high-end media personality married to a famous musician Justin Bieber. As a public figure, she has a massive following of more than a million fans on Facebook, Twitter, and other social media platforms. Looking at the difference between Facebook and Twitter as social media platforms, one could speculate that a celebrity like Hailey would show a difference in what they post. Facebook has always been a platform where friends and family connect updating each other on their lives(Forsey). Generally, Facebook involves sharing more personal and private lives. Twitter is used to share ideas, real-time information, and trending news(Forsey). While it could be used to share with friends, most people on Twitter share ideas related to work, politics, sports, and other general topics more than family and personal lives. Observations and comparisons of Hailey’s Facebook and Twitter use show more frequency in Facebook posting than on Twitter.

On Facebook, she shares about her work as a model, especially her professional photos. On a few occasions, she shares pictures of the background and GIFs of moments during her work. For instance, in a post on 29th February 2020, she posts photos of herself at Jimmy Fallon’s show, and on 27th April 2020 photos of background work as a model with Jaden Smith on the LEVI campaign. She also advertises clothes and make-up products with a touch on her personal life. Her last post on Facebook reads, ‘my favorite jeans for life. love my Levi’s family”. She also advertised lipstick while talking about how well she felt prepared to face the day. However, about 50 percent of her posts were photos of her family as a couple in different locations and her alone.

On Twitter, Hailey’s post was more of retweets commenting emotionally on other people’s especially friends and fans, work, and ideas. She also does a lot of advertising still attaching some of her personal information along. For instance, she posts the Mineralist lipstick, and make-up shades are her weakness on 24th January 2020. She also retweets a lot on the Yummy song by her husband, Justin Bieber. One of her tweets with the highest number of engagements and about 27k likes is on her photos speculating that she would bring her pink color back. Such posts create a feeling of being informed about the next celebrity’s move increasing the feeling of interpersonal relationship and liking from their audiences. Generally, while comparing it with Facebook, she posts less on Twitter about her marriage and a couple of photos with Justin Bieber. She also posts fewer pictures on Twitter. However, one thing that stands out on both Twitter and Facebook is how she uses her day-to-day life information, routines, and activities to endorse products and her brand. In the end, while sharing her information, her fans feel connected more to her. Looking at likes and comments on Facebook and Twitter, it seems like there are more likes and comments on her couple photos on Facebook than on Twitter. Such likes and engagements are the driving force of the types of posts celebrities put up on their social media platforms. She, like other celebrities, shares her opinions, relationships with friends, career, and nothing about politics.

In conclusion, Hailey uses more personal disclosure, both career, and family life to advertise for cloth and make-up products. Facebook and Twitter platforms are different in terms of how people interact. The interactions influenced what Hailey posted. For instance, on Facebook, she published more of their marriage and intimate couple photos compared to on Twitter. Such an observation could be related to the nature of privacy sharing on Facebook and ideas sharing on Twitter. However, on both Facebook and Twitter, she uses emotions to persuade consumers about products.