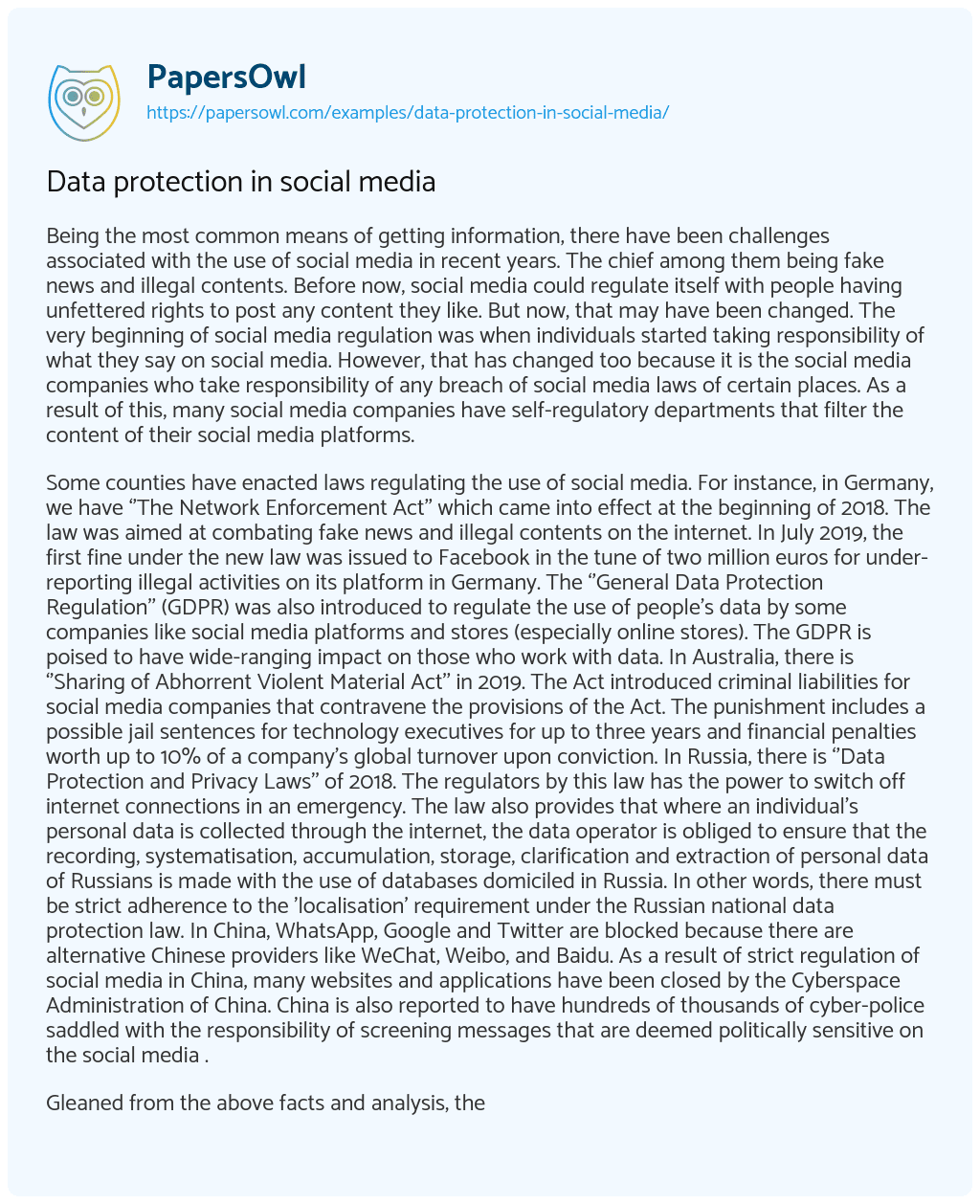 Some counties have enacted laws regulating the use of social media. For instance, in Germany, we have ‘’The Network Enforcement Act’’ which came into effect at the beginning of 2018. The law was aimed at combating fake news and illegal contents on the internet. In July 2019, the first fine under the new law was issued to Facebook in the tune of two million euros for under-reporting illegal activities on its platform in Germany. The ‘’General Data Protection Regulation’’ (GDPR) was also introduced to regulate the use of people’s data by some companies like social media platforms and stores (especially online stores). The GDPR is poised to have wide-ranging impact on those who work with data. In Australia, there is ‘’Sharing of Abhorrent Violent Material Act’’ in 2019. The Act introduced criminal liabilities for social media companies that contravene the provisions of the Act. The punishment includes a possible jail sentences for technology executives for up to three years and financial penalties worth up to 10% of a company’s global turnover upon conviction. In Russia, there is ‘’Data Protection and Privacy Laws’’ of 2018. The regulators by this law has the power to switch off internet connections in an emergency. The law also provides that where an individual’s personal data is collected through the internet, the data operator is obliged to ensure that the recording, systematisation, accumulation, storage, clarification and extraction of personal data of Russians is made with the use of databases domiciled in Russia. In other words, there must be strict adherence to the ‘localisation’ requirement under the Russian national data protection law. In China, WhatsApp, Google and Twitter are blocked because there are alternative Chinese providers like WeChat, Weibo, and Baidu. As a result of strict regulation of social media in China, many websites and applications have been closed by the Cyberspace Administration of China. China is also reported to have hundreds of thousands of cyber-police saddled with the responsibility of screening messages that are deemed politically sensitive on the social media .

Gleaned from the above facts and analysis, the world has come to realise the need for technology regulation and measures taken to regulate same to ensure compliance and adequate use of technology for better purposes. With the regulations being put in place in social media, the content has been quite resourceful because the users are now mindful of what they post, and social media companies are mindful of what they allow to avoid sanctions. As a result of this, we have seen many posts taken down by Facebook, Twitter, YouTube and other social media platforms moments after they are posted, courtesy of the regulations. It is true the media companies cannot influence what people say or do on their platform, but they have the responsibility of determining what remains because they become liable if illegal contents are found in their platform. There is also regulations and censoring in mainstream media houses like radio and television stations. This means that media houses must not allow itself to be used to disseminate false information. Some contents on radio and television are viewer descriptive in the sense that viewer discretion is always advised and recommended. There are programs for adult which are not meant to be viewed by children. All this measure by the media houses is to act within the ambit of law and avoid any liability that may arise as a result of the content of their program.