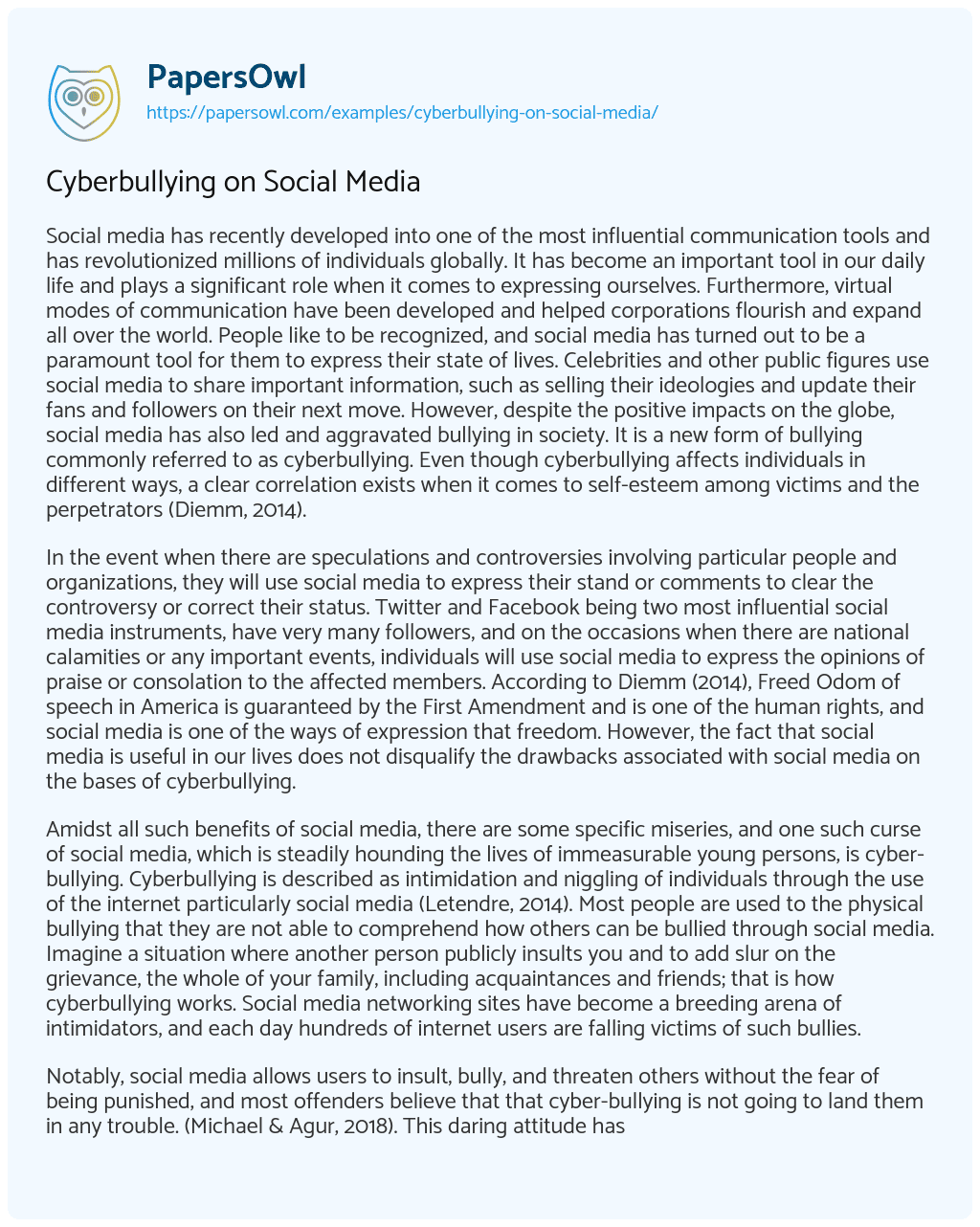 Social media has recently developed into one of the most influential communication tools and has revolutionized millions of individuals globally. It has become an important tool in our daily life and plays a significant role when it comes to expressing ourselves. Furthermore, virtual modes of communication have been developed and helped corporations flourish and expand all over the world. People like to be recognized, and social media has turned out to be a paramount tool for them to express their state of lives. Celebrities and other public figures use social media to share important information, such as selling their ideologies and update their fans and followers on their next move. However, despite the positive impacts on the globe, social media has also led and aggravated bullying in society. It is a new form of bullying commonly referred to as cyberbullying. Even though cyberbullying affects individuals in different ways, a clear correlation exists when it comes to self-esteem among victims and the perpetrators (Diemm, 2014).

In the event when there are speculations and controversies involving particular people and organizations, they will use social media to express their stand or comments to clear the controversy or correct their status. Twitter and Facebook being two most influential social media instruments, have very many followers, and on the occasions when there are national calamities or any important events, individuals will use social media to express the opinions of praise or consolation to the affected members. According to Diemm (2014), Freed Odom of speech in America is guaranteed by the First Amendment and is one of the human rights, and social media is one of the ways of expression that freedom. However, the fact that social media is useful in our lives does not disqualify the drawbacks associated with social media on the bases of cyberbullying.

Amidst all such benefits of social media, there are some specific miseries, and one such curse of social media, which is steadily hounding the lives of immeasurable young persons, is cyber-bullying. Cyberbullying is described as intimidation and niggling of individuals through the use of the internet particularly social media (Letendre, 2014). Most people are used to the physical bullying that they are not able to comprehend how others can be bullied through social media. Imagine a situation where another person publicly insults you and to add slur on the grievance, the whole of your family, including acquaintances and friends; that is how cyberbullying works. Social media networking sites have become a breeding arena of intimidators, and each day hundreds of internet users are falling victims of such bullies.

Notably, social media allows users to insult, bully, and threaten others without the fear of being punished, and most offenders believe that that cyber-bullying is not going to land them in any trouble. (Michael & Agur, 2018). This daring attitude has been fueled through the use of social media technology which has instigated most of the cyberbullying cases. To combat this behavior the society should enact proper measures and policies that will be taken against the perpetrators. Without these policies, social media will remain a tool to be used for body shamming and other cyberbullying acts, which can cause huge damages to the victims.

Behind the safety of a screen and a catchy/fake username, social media has led to the rise of various wrongs. For one, people post whatever they want, regardless of who will get hurt in the process. This has led to the intrusion and violation of the privacy of many people. Insults on social media are traded like it’s a norm. Social media has given people the ‘courage’ to insult others, something that we would not do in a face to face scenario.

Furthermore, social media has made it easier for people to be bullied, and in several instances, led to suicide. Through social media, stalkers are finding it easier to prey on their victims. To some extent, this has made the world feel a little bit less secure. It is a common perception that no one cares what other social media users think or speak of you because of the freedom that most social media platforms offer. According to Akhtar (2012), Cyberbullying has become prevalent, and individuals are starting to consider it as a norm because no one will hold them accountable for their online behavior. Cyberbullying is rampant on social media platforms and is increasing due to the much freedom being offered by social networking sites. It is evident from several Types of research by Non-governmental organizations that individuals have reportedly committed suicide because of cyberbullying (Diem, 2014). A good example is a 16-year-old student from Central High School in Manchester who committed suicide after being ridiculed on social media posts for being a homosexual (Rueb, 2019).

With technology advancement and the ease of access to information, transferring and sharing images, screenshots, and other related data has become a way of blackmailing others. Blackmail is one of the major causes of cyberbullying (Natalie and James, 2010). If a person denies the influence of social media on our daily life, that person is ignorant. Social media uprising is one of the largest technological advancements. According to the statistics from PEW research, 75% of social media users utilize their accounts daily (Woifer & Scheithauer, 2014). The users are made to believe that the sites provide them with the Privacy they deserve and that they can express their feelings or opinions to whom they feel like. However, the effects of social media, especially on youth, are quite negative because they are immature, and the exposure they are getting from the Sites may be too much (Singh, 2017). Individuals express their freedom through comments and posts. Nasty and disguising comments are common on the sites as users are not afraid of action that may be taken against them; therefore, they do it openly and whenever they feel like.

The fact that social media is useful in our lives does not eliminate the shortcomings associated with social media on the bases of cyberbullying. The disagreement that pictures or/and videos posted on social media frequently interfere with an individual’s privacy. Social media lets individuals to respond against inequality and other injustices that exist in society. The users are free to give or express their anger, which would have been suppressed in fear of the consequences. Social networking sites are allowing users to bully, insult and threaten others without the fear of being punished, and many of the offenders believe that cyber-bullying cannot land them on the bad side of the law nor any problem.

The fearless attitude that these oppressors have is mostly driven by social media technology and the freedom it possesses and thus prompting more cyber-bullying cases, and unless proper retributive measures are taken against the perpetrators, social networking sites will continue to be used as means of bullying. According to research by Human Rights Activist (2018), cyber-bullying can be damaging to the victims. Every citizen from different parts of the world has the right and freedom of expression. Therefore the social media allows people to express their opinions and understandings. Social media can be very useful and at some, a tool for committing crimes based on how the users utilize the sites. Therefore users should be very careful when using social sites.

What Cyberbullying on Social Media Leads to