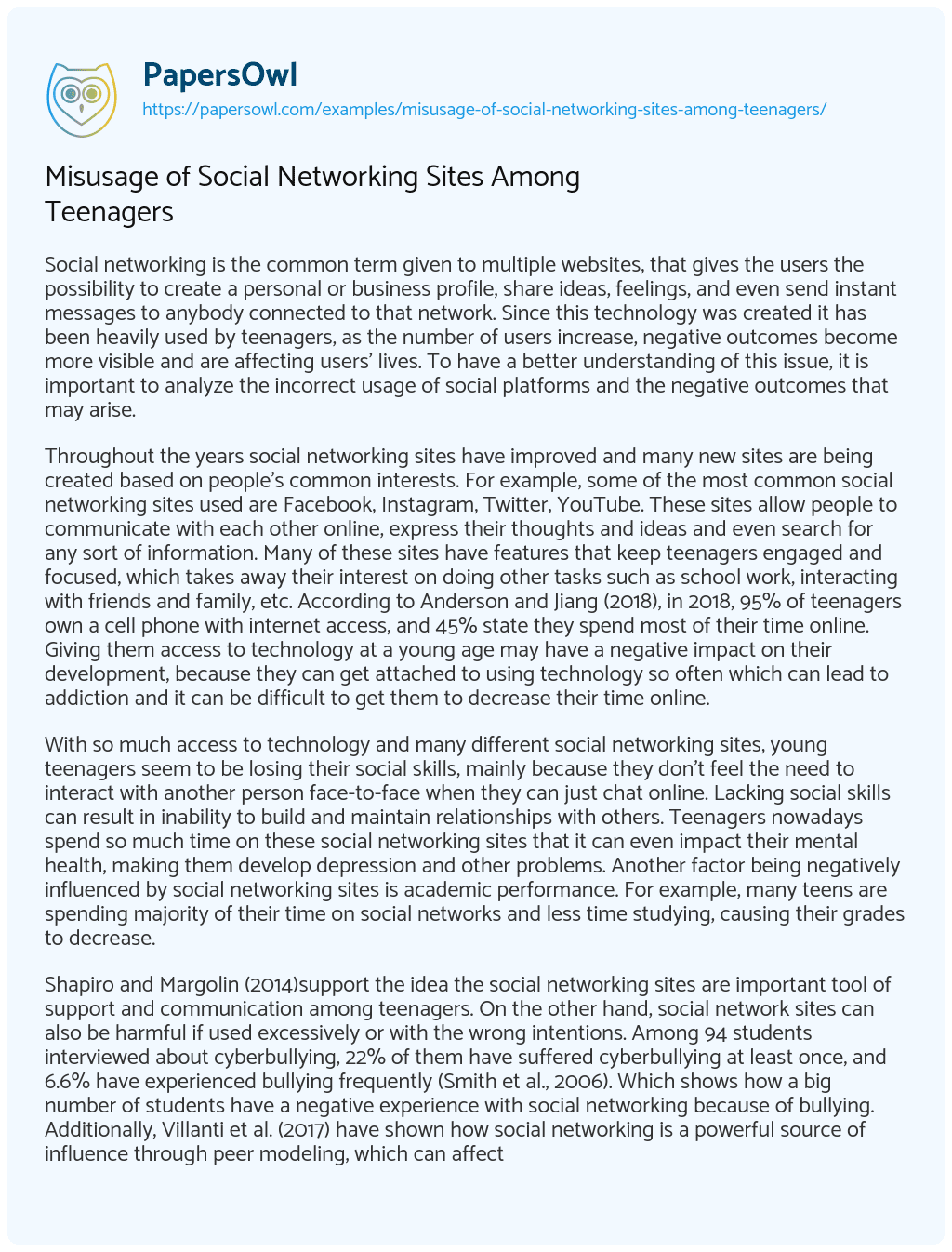 Social networking is the common term given to multiple websites, that gives the users the possibility to create a personal or business profile, share ideas, feelings, and even send instant messages to anybody connected to that network. Since this technology was created it has been heavily used by teenagers, as the number of users increase, negative outcomes become more visible and are affecting users’ lives. To have a better understanding of this issue, it is important to analyze the incorrect usage of social platforms and the negative outcomes that may arise.

Throughout the years social networking sites have improved and many new sites are being created based on people’s common interests. For example, some of the most common social networking sites used are Facebook, Instagram, Twitter, YouTube. These sites allow people to communicate with each other online, express their thoughts and ideas and even search for any sort of information. Many of these sites have features that keep teenagers engaged and focused, which takes away their interest on doing other tasks such as school work, interacting with friends and family, etc. According to Anderson and Jiang (2018), in 2018, 95% of teenagers own a cell phone with internet access, and 45% state they spend most of their time online. Giving them access to technology at a young age may have a negative impact on their development, because they can get attached to using technology so often which can lead to addiction and it can be difficult to get them to decrease their time online.

With so much access to technology and many different social networking sites, young teenagers seem to be losing their social skills, mainly because they don’t feel the need to interact with another person face-to-face when they can just chat online. Lacking social skills can result in inability to build and maintain relationships with others. Teenagers nowadays spend so much time on these social networking sites that it can even impact their mental health, making them develop depression and other problems. Another factor being negatively influenced by social networking sites is academic performance. For example, many teens are spending majority of their time on social networks and less time studying, causing their grades to decrease.

Shapiro and Margolin (2014)support the idea the social networking sites are important tool of support and communication among teenagers. On the other hand, social network sites can also be harmful if used excessively or with the wrong intentions. Among 94 students interviewed about cyberbullying, 22% of them have suffered cyberbullying at least once, and 6.6% have experienced bullying frequently (Smith et al., 2006). Which shows how a big number of students have a negative experience with social networking because of bullying. Additionally, Villanti et al. (2017) have shown how social networking is a powerful source of influence through peer modeling, which can affect those teenagers’ behaviors based on the information they access, which can be dangerous if the wrong behaviors be created based on extreme or wrong information. Finally, Anderson and Jiang (2018) have pointed that when teenagers were asked about their opinion about social networking effect in their age group 45% considered that it has a neutral effect, 31% considered a positive effect and 24% a negative effect. This shows how the social networking is not totally good or bad, it depends of the user’s outcome and opinion.

Finally, social networks have shown their value connecting people, making them informed, helping the dialog and the public expression of feelings and opinions, which has yet been one of the most powerful communication tool. But, when talking about the usage of these tools among teenagers, attention its highly required, as it is putting a lot of them in dangers as they misuse it or overuse it. As is shown when analyzing cyberbullying, health and mental problems and the problems on social interactions.

The Impact of Social Networking Sites on the Youth