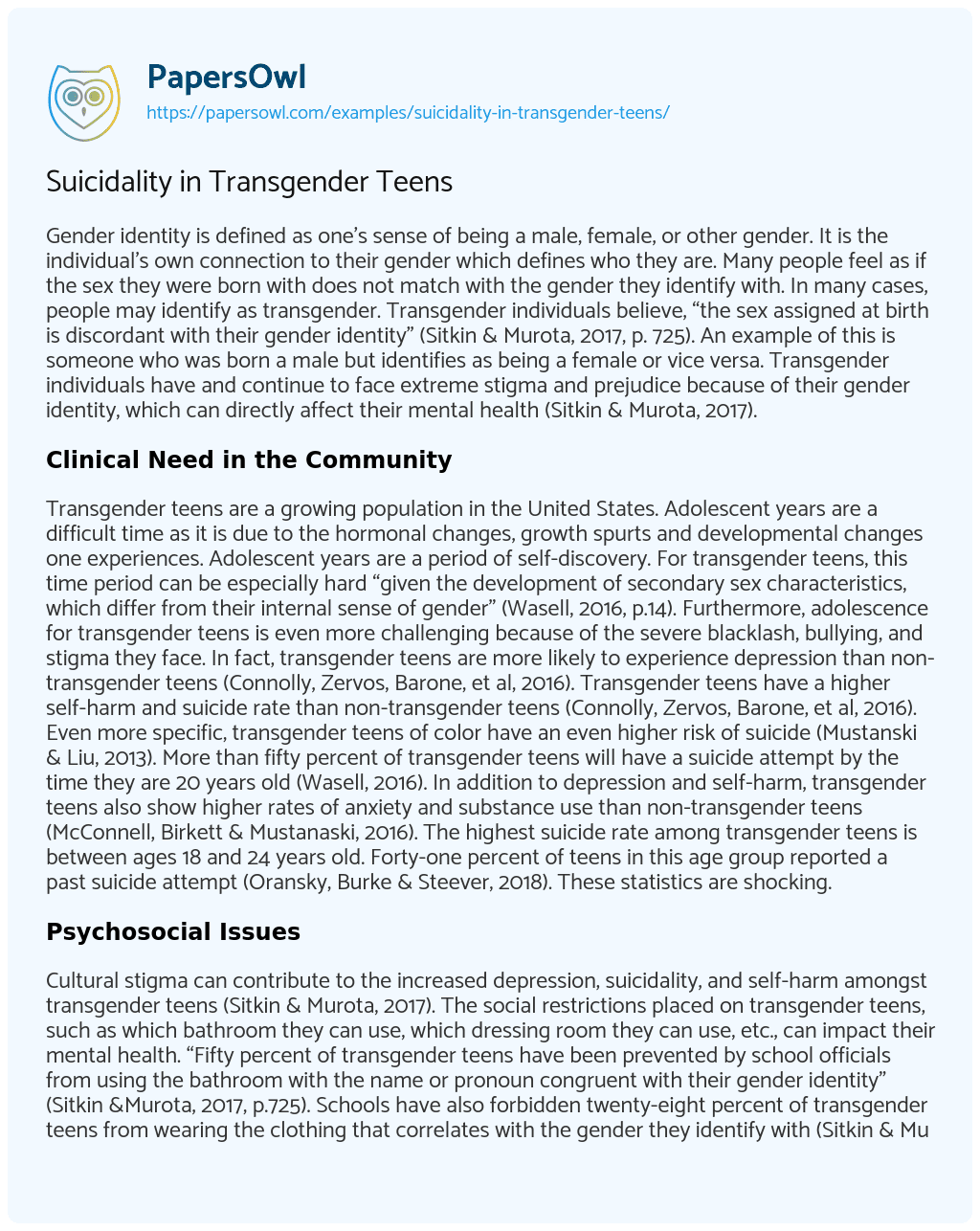 Gender identity is defined as one’s sense of being a male, female, or other gender. It is the individual’s own connection to their gender which defines who they are. Many people feel as if the sex they were born with does not match with the gender they identify with. In many cases, people may identify as transgender. Transgender individuals believe, “the sex assigned at birth is discordant with their gender identity” (Sitkin & Murota, 2017, p. 725). An example of this is someone who was born a male but identifies as being a female or vice versa. Transgender individuals have and continue to face extreme stigma and prejudice because of their gender identity, which can directly affect their mental health (Sitkin & Murota, 2017).

Clinical Need in the Community

Cultural stigma can contribute to the increased depression, suicidality, and self-harm amongst transgender teens (Sitkin & Murota, 2017). The social restrictions placed on transgender teens, such as which bathroom they can use, which dressing room they can use, etc., can impact their mental health. “Fifty percent of transgender teens have been prevented by school officials from using the bathroom with the name or pronoun congruent with their gender identity” (Sitkin &Murota, 2017, p.725). Schools have also forbidden twenty-eight percent of transgender teens from wearing the clothing that correlates with the gender they identify with (Sitkin & Murota, 2017). Discrimination and rejection as such directly relates to the increase in depressive symptoms these individuals experience. These depressive symptoms can lead to self-injurious behavior and suicide ideations and attempts.

Additionally, the acceptance of a transgender individual’s family plays a big role in their mental health. Transgender teens have been associated with higher suicide risks for having families who rejected them. Specifically, the suicide attempts are eight times higher in transgender teens whose family exhibited rejecting behavior towards them (Sitkin & Murota, 2017). Transgender teens were five times more at risk of experiencing depressive symptoms and three times more at risk of abusing substances when experiencing family rejection (McConnell, Birkett & Mustanski, 2016). Hopelessness is risk factor for suicide that has been linked to transgender youth (Mustanski & Liu, 2013). Transgender teens that are not supported by their family are thirteen times more likely to commit suicide than those that do have family support (Wasell, 2016). It is safe to say the more accepting families are of transgender teens, the lower the risk of suicide or self-harm.

Besides the transgender teen themselves, other people can be affected by this growing issue. As previously mentioned, the family of the individual is directly affected and plays a big role in helping keep the individual safe and healthy. Friends of the transgender individual can be affected as well. It is important for the transgender individual to have strong support system. In fact, strong family and friend support has been connected to lower suicidality rates, depression and substance use amongst transgender teens (McConnell, Birkett & Mustanski, 2016). Lack of family support can often time lead to homelessness. Homelessness can occur by choosing to leave the home because of no family support or being forced out of the home by the family. Homelessness can put the transgender teen at a higher risk of mental health symptoms including suicidality and self-harm. Transgender teens make up forty percent of homeless teens and the most common reason for their homelessness was because of family rejection (McConnell, Birkett & Mustanski, 2016).

In order to help reduce the suicidality rates in transgender teens, the adolescent population as a whole needs to be reached. As mentioned earlier, a lot of the stressors related to increased suicidal ideations in transgender teens stems from being bullied or discriminated against. Much of this bullying occurs in school and in the community they live in. Educating adolescent’s peers of these transgender individuals would be a good place to start. Additionally, targeting this population may give those individuals who are unable to communicate their struggles an opportunity to reach out and get help. Many adolescents are afraid to “come out” or share their truth out of fear of rejection by family and friends. These individuals are just as important as the ones who are brave enough to speak out about their struggles.

In order to help combat this growing issue in the United States, it is necessary for treatment to be accessible for transgender teens. A program where transgender teens can come to feel safe, accepted and supported is extremely important. They can receive mental health counseling, psycho education and learn skills such as social skills, anger management skills, etc. to help them be successful in the community. Also, families of these individual can also be included in treatment and therapy sessions. Transportation to and from this program would be necessary since many of these teens may be too young to drive or have financial restrains prohibiting them from taking public transportation. Since homelessness is very common among transgender teens, having housing opportunities such as group homes would be very beneficial service for these teens. Homelessness is yet another stressor these teens have to face so eliminating this stressor would be very helpful.

There are some resources available in the community that offer help for transgender teens. Specifically, the Hetrick- Martin Institute or HMI, locate in Newark, NJ is a great resource for LGBTQ teens to attend. They serve LGBTQ ages 13-24 and their families and offer counseling, referrals, job readiness, health and wellness, etc. It is a safe and supportive environment for LGBTQ youth to go and feel welcome. The RAIN foundation is another community resource located in East Orange, NJ that serves LGBTQ homeless youth. They provide emergency shelter and assist with housing for homeless LGBTQ. Garden State Equality is a statewide organization for the LGBTQ community. They primarily focus on advocacy, policy work and trainings for the LGBTQ community. They ensure transgender individuals and other members of the LGBTQ community are not experiencing discrimination or bullying in New Jersey.

There are some support groups offered throughout NJ for LGBTQ as well. In Bergen County, Bergenpflag and West Bergen Mental Healthcare are two support groups that meet with LGBTQ teens and their families. Although there are more resources beginning to appear, there are not nearly enough available at this time. It is possible there is not enough funding for these programs to exist. It is also possible society may not realize how severe this truly issue is. Also, it is possible many people do not even realize these resources even exist. More advertising for these programs is necessary to help get the word out to people in need. This seems to be where the gap lies. The need for more LGBTQ resources to help transgender teens that are struggling with suicidal ideations, self-harm and depression is dire.

This clinical need is an issue very important to me. As a clinician in the mental health field, I have seen a rapid increase in transgender teens coming into my program seeking treatment. Most are very depressed and suicidal because of the bullying and rejection they have experienced throughout their life. They feel alone, isolated and misunderstood. It is disheartening to hear their stories of how people have physically and verbally attacked them because of their gender identity. I have witnessed these individuals become stronger, healthier and more confident human beings by coming to treatment. I have heard transgender adolescents say, “This place saved my life”. As a clinician, it is such an incredible feeling to know how much of an impact you can have on someone’s life.

On a personal level, I also have many friends who are members of the LGBTQ community and have gone through similar experiences. They too have experienced the bullying and prejudice others have felt when it pertains to their gender identity. This motivates me even more to provide the best treatment and support for these individuals. No one should have to feel like causing harm to themselves or taking their own life is the only option.

The Effects of the Ostracization of Transgender Youth