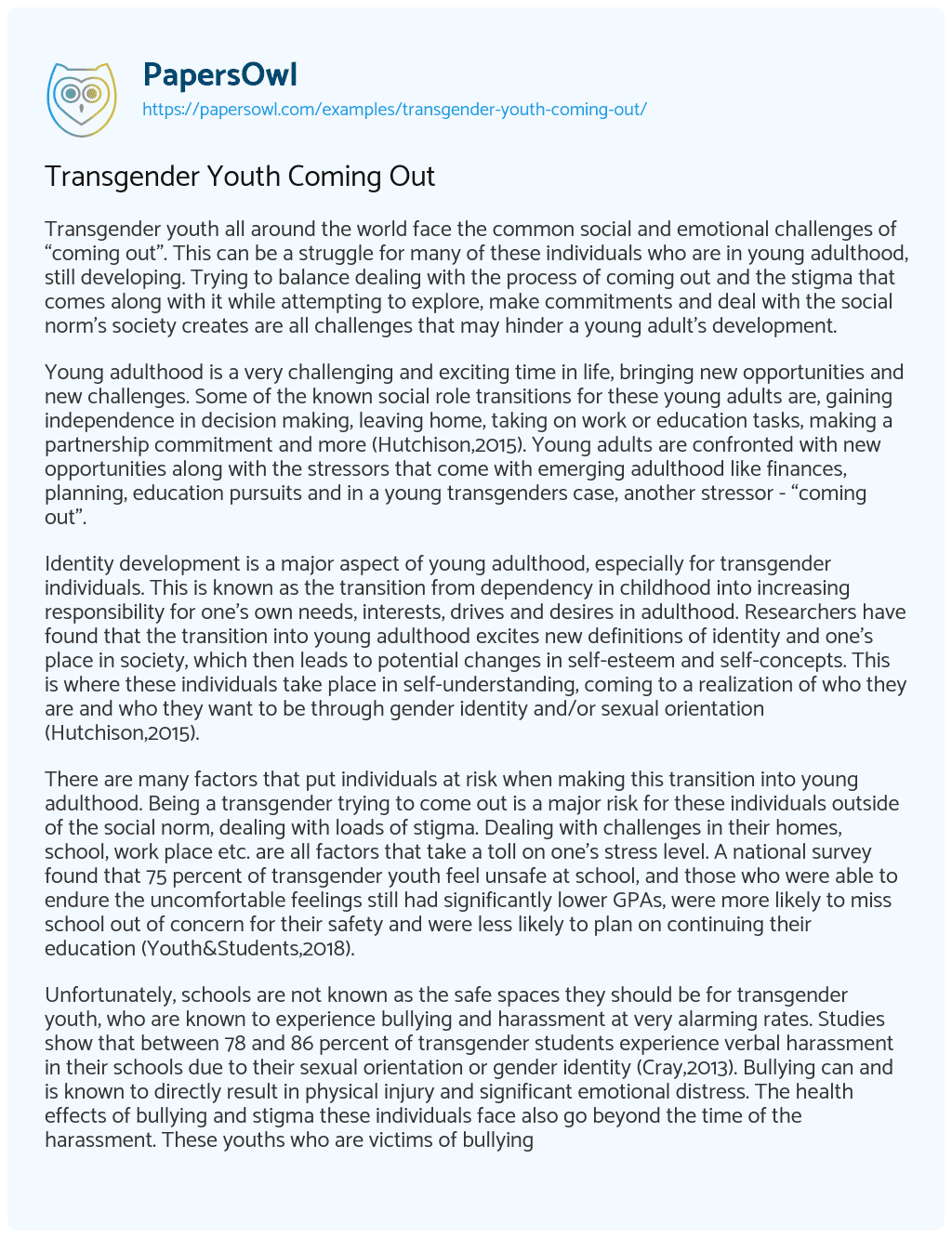 Transgender youth all around the world face the common social and emotional challenges of “coming out”. This can be a struggle for many of these individuals who are in young adulthood, still developing. Trying to balance dealing with the process of coming out and the stigma that comes along with it while attempting to explore, make commitments and deal with the social norm’s society creates are all challenges that may hinder a young adult’s development.

Young adulthood is a very challenging and exciting time in life, bringing new opportunities and new challenges. Some of the known social role transitions for these young adults are, gaining independence in decision making, leaving home, taking on work or education tasks, making a partnership commitment and more (Hutchison,2015). Young adults are confronted with new opportunities along with the stressors that come with emerging adulthood like finances, planning, education pursuits and in a young transgenders case, another stressor – “coming out”.

Identity development is a major aspect of young adulthood, especially for transgender individuals. This is known as the transition from dependency in childhood into increasing responsibility for one’s own needs, interests, drives and desires in adulthood. Researchers have found that the transition into young adulthood excites new definitions of identity and one’s place in society, which then leads to potential changes in self-esteem and self-concepts. This is where these individuals take place in self-understanding, coming to a realization of who they are and who they want to be through gender identity and/or sexual orientation (Hutchison,2015).

There are many factors that put individuals at risk when making this transition into young adulthood. Being a transgender trying to come out is a major risk for these individuals outside of the social norm, dealing with loads of stigma. Dealing with challenges in their homes, school, work place etc. are all factors that take a toll on one’s stress level. A national survey found that 75 percent of transgender youth feel unsafe at school, and those who were able to endure the uncomfortable feelings still had significantly lower GPAs, were more likely to miss school out of concern for their safety and were less likely to plan on continuing their education (Youth&Students,2018).

Unfortunately, schools are not known as the safe spaces they should be for transgender youth, who are known to experience bullying and harassment at very alarming rates. Studies show that between 78 and 86 percent of transgender students experience verbal harassment in their schools due to their sexual orientation or gender identity (Cray,2013). Bullying can and is known to directly result in physical injury and significant emotional distress. The health effects of bullying and stigma these individuals face also go beyond the time of the harassment. These youths who are victims of bullying are at increased risk for depression, anxiety and other negative health outcomes in their futures as well. These issues put transgender youths at a disadvantage and very well hinders their development.

It is not just hostility from peers that threatens the development for these young transgenders. The lack of acceptance from one’s own family is a major emotional challenge these individuals face. Lack of communication and misunderstanding between parents and their trans youth increases family conflict. Problems with communication and lack of understanding about sexual orientation and gender identity can lead to fighting and family disruption that can result in major emotional challenges for these individuals (Ryan,2009). These factors increase their risk for serious health and mental health problems. For example, research shows that transgender people who were rejected by their families because of their identity have much lower self-esteem and have fewer people they can turn to for help. They are also more isolated because of their lack of support and overall have less support than those who are accepted by their families (Human Rights Campaign,2018).

Young adults with severe emotional difficulties like many of these transgenders, are likely to face more challenges in the transition into adulthood (Hutchison,2015). These individuals are known for having trouble forming meaningful interpersonal relationships, maintaining employment, managing health needs and gaining financial independence. Many of these young adults with little to no stable support systems are left with the risk of becoming homeless. Without emotional support a number of stressful events are bound to occur, and it will be very difficult to overcome.

As a social worker handling cases of these youths facing the stressors, struggles and stigma that come with “coming out”, I would use the Intersectionality theory and Erikson’s Psychosocial theory to analyze the factors that affect the development of young transgender adults. Intersectionality theory consists of overlapping various social identities of an individual such as race, gender, sexuality, and class which contribute to the specific type of systemic oppression and discrimination experienced by an individual. Erikson’s Psychosocial theory consists of eight stages of psychosocial development, young adulthood being one of the eight. Within this theory, young adulthood is described as the time when individuals move from the identity fragmentation, confusion, and exploration of adolescence into more intimate engagement with significant others. Erikson believed that an unsuccessful effort at this stage might lead the young adult to feel alienated, disconnected and alone (Hutchison,2015).

In this case of young transgenders facing numerous of emotional and mental issues, intersectionality is useful because the individual’s gender and sexual identity contribute to the stigma society puts on them.

The Effects of the Ostracization of Transgender Youth