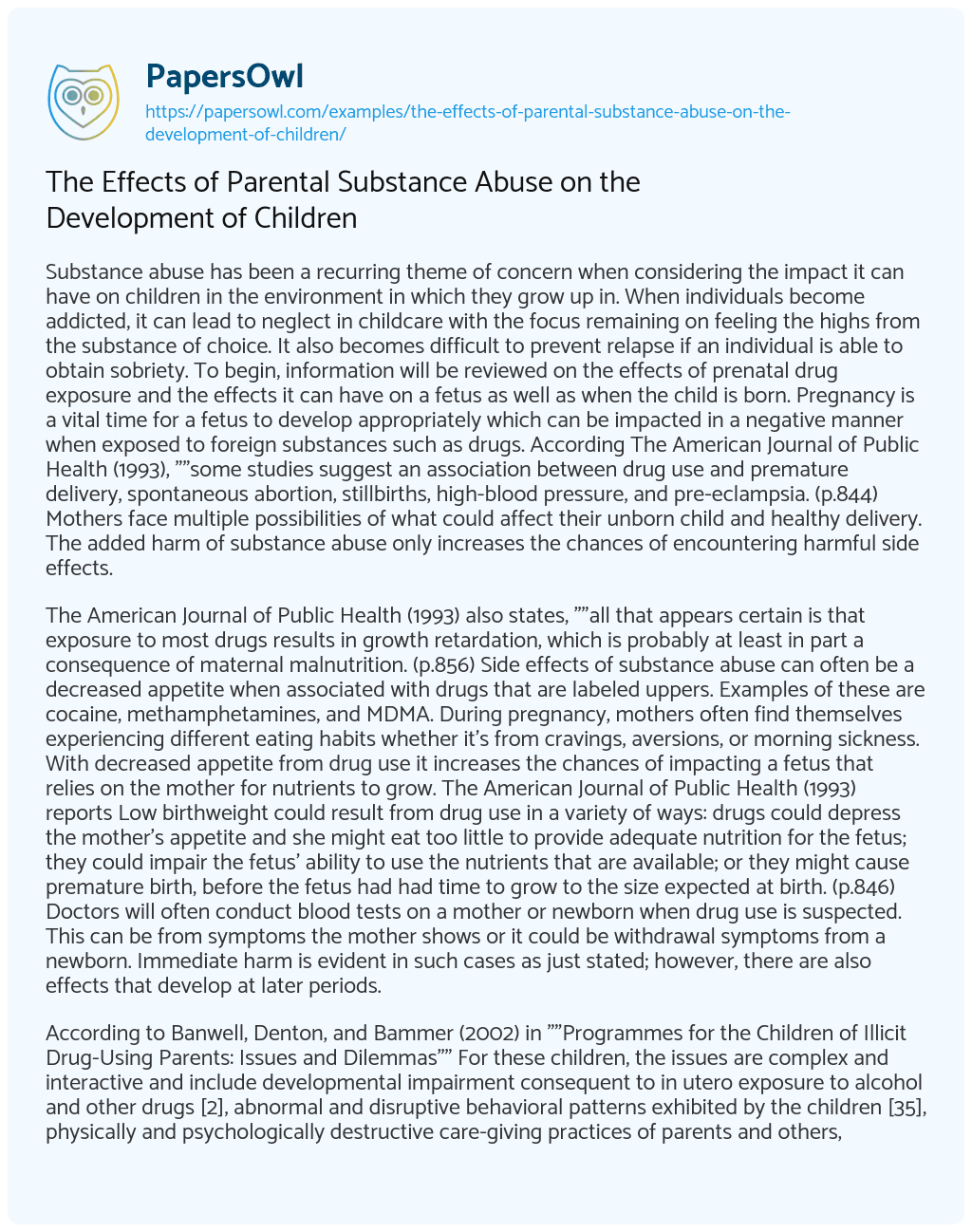 Substance abuse has been a recurring theme of concern when considering the impact it can have on children in the environment in which they grow up in. When individuals become addicted, it can lead to neglect in childcare with the focus remaining on feeling the highs from the substance of choice. It also becomes difficult to prevent relapse if an individual is able to obtain sobriety. To begin, information will be reviewed on the effects of prenatal drug exposure and the effects it can have on a fetus as well as when the child is born. Pregnancy is a vital time for a fetus to develop appropriately which can be impacted in a negative manner when exposed to foreign substances such as drugs. According The American Journal of Public Health (1993), “”some studies suggest an association between drug use and premature delivery, spontaneous abortion, stillbirths, high-blood pressure, and pre-eclampsia. (p.844) Mothers face multiple possibilities of what could affect their unborn child and healthy delivery. The added harm of substance abuse only increases the chances of encountering harmful side effects.

The American Journal of Public Health (1993) also states, “”all that appears certain is that exposure to most drugs results in growth retardation, which is probably at least in part a consequence of maternal malnutrition. (p.856) Side effects of substance abuse can often be a decreased appetite when associated with drugs that are labeled uppers. Examples of these are cocaine, methamphetamines, and MDMA. During pregnancy, mothers often find themselves experiencing different eating habits whether it’s from cravings, aversions, or morning sickness. With decreased appetite from drug use it increases the chances of impacting a fetus that relies on the mother for nutrients to grow. The American Journal of Public Health (1993) reports Low birthweight could result from drug use in a variety of ways: drugs could depress the mother’s appetite and she might eat too little to provide adequate nutrition for the fetus; they could impair the fetus’ ability to use the nutrients that are available; or they might cause premature birth, before the fetus had had time to grow to the size expected at birth. (p.846) Doctors will often conduct blood tests on a mother or newborn when drug use is suspected. This can be from symptoms the mother shows or it could be withdrawal symptoms from a newborn. Immediate harm is evident in such cases as just stated; however, there are also effects that develop at later periods.

According to Banwell, Denton, and Bammer (2002) in “”Programmes for the Children of Illicit Drug-Using Parents: Issues and Dilemmas”” For these children, the issues are complex and interactive and include developmental impairment consequent to in utero exposure to alcohol and other drugs [2], abnormal and disruptive behavioral patterns exhibited by the children [35], physically and psychologically destructive care-giving practices of parents and others, exposure to a range of harmful and unhealthy behaviors along with dangers emanating from them, and poverty. (p.381) With any of the above negative impacts on a child, it can lead to the involvement of outside agencies such as the department of social services to prevent a child from entering a home where its safety and health is threatened. Being removed from the home is yet another effect that can be caused from substance abuse.A common association people make with substance abuse and children is the involvement of the department of social services taking custody of children in such positions. According to Franck (1996) in the article Prenatally Drug-Exposed Children in Out-of-Home Care: Are We Looking at the Whole Picture?, “”agency administrators have the responsibility for placing a growing number of children, meeting their special needs, accommodating the demands they place on foster parents, and anticipating the medical and therapeutic services that will be necessary for their care.(p.20) It’s difficult for children to be removed from their homes and can often become a traumatic experience. This can result in lower self-esteem, poor emotional regulation skills, and difficulty with relationships.

McNichol (1999) states in the article The Impact of Drug-Exposed Children on Family Foster Care, “”other research suggests that gestational exposure to illegal drugs may not influence overall cognitive development, but rather, negatively impact the mechanisms involved in the regulation of emotional states and attention to complex learning tasks.(p. 185) With possible outcomes such as this, it becomes difficult for social service agencies to place children in a safe environment where they can also meet needs that may arise like therapy. This however is only the case for those who are taken from homes at an early stage. There are also children that remain in the home and grow up in the environment of substance abuse. Every case can be different as each person involved is unique. Raitasalo and Holmila (2017) discuss in their article “”Parental Substance Abuse and Risks to Children’s Safety, Health and Psychological Development what is often seen though is children can be neglected by parents forgetting to meet their hygiene expectations, a safe home, emotional needs, as well as health (Raitasalo, 2017, p.17). According to Burlew et al. (2013) in the article Parenting and Problem Behaviors in Children of Substance Abusing Parents, “”the Substance Use and Mental Health Service Administration reported that approximately 8.3 million children in the United States lived in a home with an adult classified as abusing or dependent on alcohol or an illicit drug from 20022007.(p.231) Barnard and McKeganey (2004) discuss in their article “”The Impact of Parental Problem Drug Use on Children: What is the Problem and What Can Be Done to Help common occurrences such as excessive discipline, engagement, and positive reinforcement when raising children (Barnard, 2004, p.554). With such a large number of children encountering an unhealthy environment, it becomes necessary for adults to advocate for them. There is are many services designated to assist with those suffering from substance abuse, but there are few designed to specifically help children who are looking to overcome their environmental challenges.

Children exposed to substance abuse are often referred to mental health agencies for counseling treatment if experiencing behavioral symptoms such as defiance, aggression, or possible substance abuse themselves. According to Lewis, Holmes, Watkins, and Mathers (2015) in their article Children Impacted by Parental Substance Abuse: An Evaluation of the Supporting Kids and Their Environment Program, “”those that have been developed specifically for children are generally delivered in a group format and aim to improve children’s coping skills, interpersonal relationships, positive identity and self-esteem.(p.2399) Emotional regulation skills are necessary for any successful adult. In a stressful environment it becomes difficult to learn such skills if not properly modeled. Lewis (2015) discusses a child-focused intervention that was named SKATE for families receiving substances abuse services (Lewis, 2015, p.2399). With this type of service, children’s needs are addressed to prevent further stress in the family setting. As reported by Lewis (2015) “”SKATE was designed to be delivered within a family support context, rather than a drug treatment facility and this has three clear advantages over an adult drug treatment service: it is more suitable environment for children, family support workers are trained and competent in providing interventions for children, and family support is a context in which the parenting role of adults is highlighted. (p.2399) Treatments such as the above mentioned assist in helping those affected to avoid negative consequences such as social dysfunction and emotional stress. Parts of the emotional stress and social challenges can be from children misunderstanding what should be communicated to those outside of the home.

According Ostler, Bahar, and Jessee (2010) in Mentalization in Children Exposed to Parental Methamphetamine Abuse: Relations to Children’s Mental Health and Behavioral Outcomes state “”children’s ability to mentalize relies on accurate verbal communication between children and their attachment figures, deficits in this ability might be more prominent in families where parents abuse substances.(2010) This is due to adults telling children not to tell teachers or other adults about what is considered secrets of the family like illegal substances or activities. Being unable to know who to trust can confuse children and cause them to be wary of talking about why they are having negative feelings that come up. With all that has been discussed in this paper. It becomes clear on how human service professionals can provide care to those in need. To help children, human services can focus on treating the family environment, recommending substance abuse therapy, and helping children to learn to cope and trust others. It also becomes necessary to look at out of home placement to help nurture children in a safe and positive environment when change becomes an unrealistic expectation of the parents who are dependent on drugs and/or alcohol. Being aware of possible substance abuse in pregnant women and to help get care if abuse is suspected could be a defining change in the new family’s life. Not only should action being taken in the moment when warranted, but premeasure actions such as education around substance abuse and the impact it could have on children is of the utmost importance to help make those aware of what consequences could occur even unintentionally. Horton-Parker and Brown (2002) state in The Unfolding Life: Counseling Across a Lifespan, “”as men and women transition into parenthood, personal goals must be revised to allow the restructuring of lives that inevitably occurs with the arrival of children. (p. 92) It is our job to help new parents who face the challenge of substance abuse to create and maintain change that will not only affect them but those they bring into the world.

The Effects of Parental Substance Abuse on the Development of Children. (2019, Mar 05). Retrieved from https://papersowl.com/examples/the-effects-of-parental-substance-abuse-on-the-development-of-children/