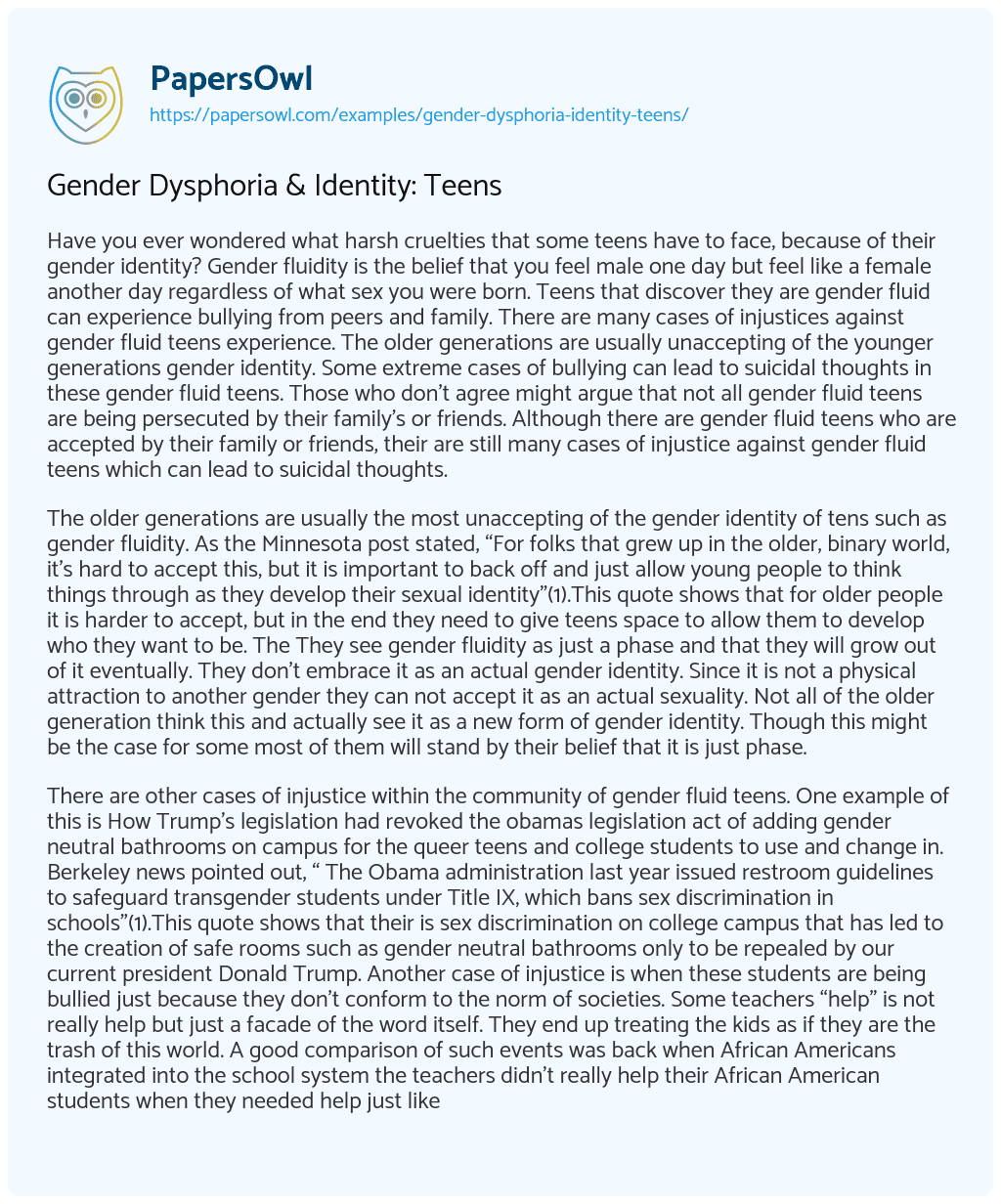 The older generations are usually the most unaccepting of the gender identity of tens such as gender fluidity. As the Minnesota post stated, “For folks that grew up in the older, binary world, it’s hard to accept this, but it is important to back off and just allow young people to think things through as they develop their sexual identity”(1).This quote shows that for older people it is harder to accept, but in the end they need to give teens space to allow them to develop who they want to be. The They see gender fluidity as just a phase and that they will grow out of it eventually. They don’t embrace it as an actual gender identity. Since it is not a physical attraction to another gender they can not accept it as an actual sexuality. Not all of the older generation think this and actually see it as a new form of gender identity. Though this might be the case for some most of them will stand by their belief that it is just phase.

There are other cases of injustice within the community of gender fluid teens. One example of this is How Trump’s legislation had revoked the obamas legislation act of adding gender neutral bathrooms on campus for the queer teens and college students to use and change in. Berkeley news pointed out, “ The Obama administration last year issued restroom guidelines to safeguard transgender students under Title IX, which bans sex discrimination in schools”(1).This quote shows that their is sex discrimination on college campus that has led to the creation of safe rooms such as gender neutral bathrooms only to be repealed by our current president Donald Trump. Another case of injustice is when these students are being bullied just because they don’t conform to the norm of societies. Some teachers “help” is not really help but just a facade of the word itself. They end up treating the kids as if they are the trash of this world. A good comparison of such events was back when African Americans integrated into the school system the teachers didn’t really help their African American students when they needed help just like they don’t help their current gender fluid teens.

Teens that experience all these hardships can eventually lead to suicidal thoughts. These thoughts often caused by mental abuse or even physical abuse are very dangerous. When teens can’t express them self with the freedom they were born with it can lead to a block in their ability to think and often leads to bad choices. That is why it is important that their family is able to accept them as who they are and who they identity as. If family is not able to then friends should be able to accept them for who they are as the younger generation has become more open with the new gender associations. Berkeley news also mentioned”The American Foundation for Suicide Prevention reports that 41 percent of transgender people will attempt suicide in their lifetimes, often attributed to high rates of bullying”. This quote shows that bullying mentally or physically leads to about half of the transgender and gender fluid teens to consider suicidal thoughts or have committed Suicide.

During an interview with the Drama teacher ,of Sanger High School, Erica Mardirosian I was able to gain an insightful view of what someone might think about gender fluid and the influence society has had on them. When asked how could a teen being gender fluid affect them her response” it could be confusing because it is a new situation to both the teen and those who know them” shows that any new gender could be confusing on its own. While growing up gender was a defining part of being a teen and still is to her. She also believed that the ten might end up feeling lost because they feel like they won’t belon in certain groups. She said that change is hard when it comes to gender because people don’t understand what these new genders are. When asked if it makes a difference if it is a gender fluid boy teen or girl teen at first she believed that it didn’t make a difference, but then replied that it does because the male gender is more defined and when males break from that definition it is more noticeable compared to the female counterpart. If a student where to confess to her about being gender fluid she would be perfectly ok with it, but she would think maybe they are confused. When asked if society was accepting of gender fluidity she replied with “no they are as accepting as someone being gay or transgender “.

When asked if society has affected her opinion she did believe it has, but it also has broadened her opinion on these topics as it began to be more accepted. While growing up she mentioned that they never even thought about someone being gay, so the thought of someone having no specific gender would just be mind boggling, but as more people began to come out of the closet she started to become more aware of the things she would say as not accidentally be rude to someone. When asked if she would stand up for a student being bullied because they are gender fluid? She responded with “of course wouldn’t you”.When asked if this was a relevant topic she replied”yes and it is especially in the forefront of social issues”. She mentioned that we are getting to a point where we accept everything and anything can go. She made a comparison of swinging like a pendulum that right now we are swing far to one direction and that it is very possible that we will swing back in the other direction. When asked for more clarification she said that it was very possible that we might revert back to the 50’s where gender was strictly defined as male or female. She stated that “this interview has definitely given her more to think about and has made her curious about the topic”.

Since teens are being bullied because they are not gender conforming they are becoming suicidal. This will leave a negative impact on society because today’s children are tomorrow’s future. What future will the United States of America have if all the kids that are different die. It would be a bleak future that is why just as Erica Mardirosian has become more aware of what she is saying, so should we be as well. There are many instances where the bully’s opinion was directly influenced by a parent or legal guardian. As time goes on the amount of families that still have a old fashion view in this world will eventually become, so small that it won’t make a difference if their opinion was negative of gender nonconforming teens.

Since trump administration repealed the Title IX schools have been protesting the repeal and have been trying to at least convince the colleges to keep the gender neutral bathrooms because they are the few safe harbors left for the nonconforming student. Teens who don’t feel like a boy or a girl must feel attack’s by this action. Just as it was mentioned before these thought are very negative and can lead to suicidal thoughts.

The solution to the many cases of injustices is just to have an open mind about topics that are sensitive such as gender fluidity. This will also help prevent suicidal thoughts and actual suicides. Sometimes all these teens want is to fit in and that can be hard when they are so different from the rest of the students. No one person can make a change but one person performing an act of kindness will set off a chain reaction of kindness which will help all those feeling blue. What I’ll not work is being narrow minded about sensitive topics. People need to be mature about topics that are sensitive because nobody can know that someone might be genderfluid or transgender. People who oppose this will say that this is just a fad in today’s society or that it is being controlled by liberals. Their will always be an opposition and whether or not it correlates back to the subject at hand is a different matter. In the end it is important to have an open mind, listen to those who wish to talk to you, and support your child or friend regardless or not you fully understand it because you will learn about gender fluidity through the process.

How does a teen discovering that they are gender fluid affect them? In the end there are many problems for being a genderfluid person let alone a gender fluid teen because a teen is already at their most sensitive part of their life. In conclusion even though there are teens that aren’t bullied by their fellow peers and family there are still some teens who experience it and for them that can lead to suicidal thoughts. Being a gender fluid teen will lead to bullying and suicidal thoughts, but just as that happens it will become more accepted as more people come out.

About Gender Identity in Society