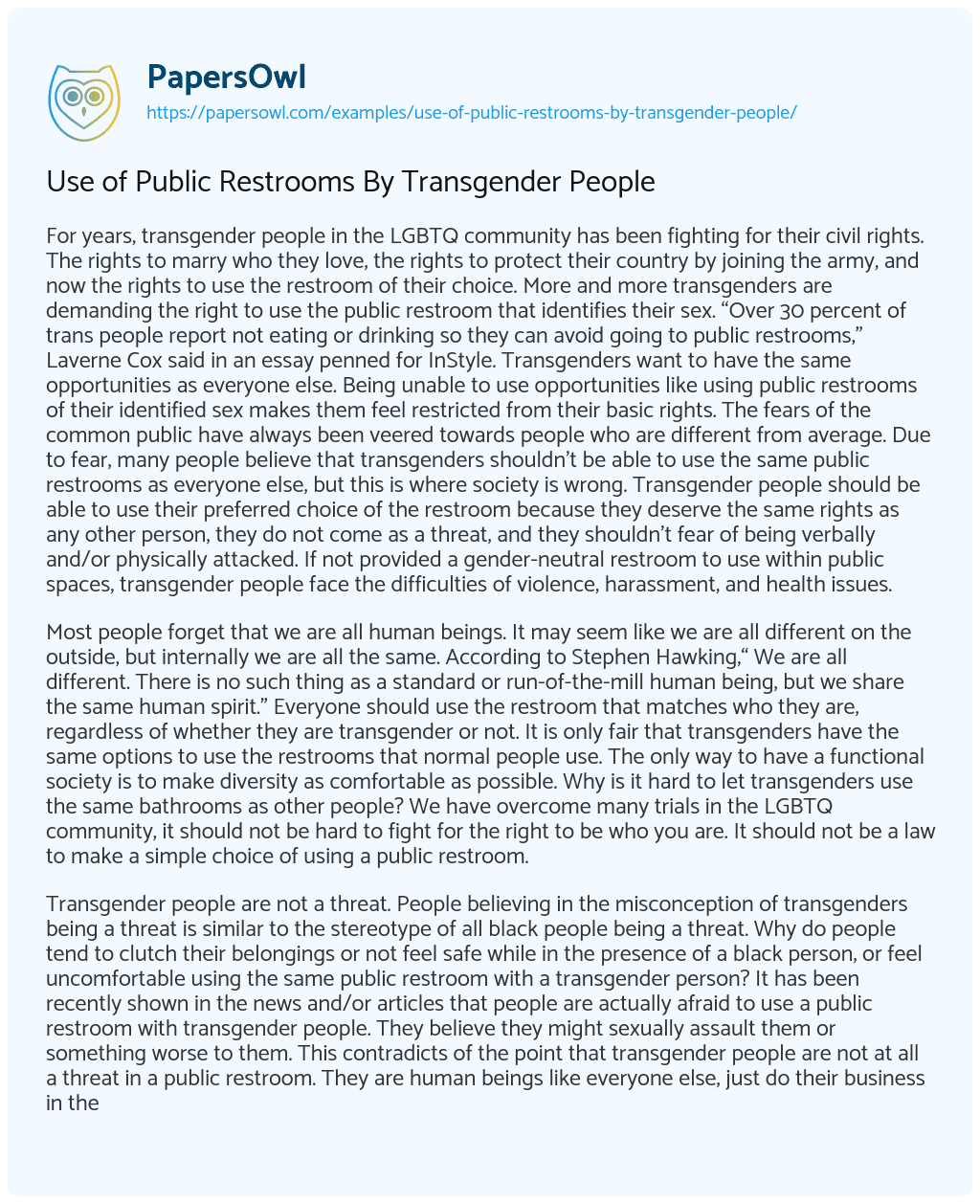 For years, transgender people in the LGBTQ community has been fighting for their civil rights. The rights to marry who they love, the rights to protect their country by joining the army, and now the rights to use the restroom of their choice. More and more transgenders are demanding the right to use the public restroom that identifies their sex. “Over 30 percent of trans people report not eating or drinking so they can avoid going to public restrooms,” Laverne Cox said in an essay penned for InStyle. Transgenders want to have the same opportunities as everyone else. Being unable to use opportunities like using public restrooms of their identified sex makes them feel restricted from their basic rights. The fears of the common public have always been veered towards people who are different from average. Due to fear, many people believe that transgenders shouldn’t be able to use the same public restrooms as everyone else, but this is where society is wrong. Transgender people should be able to use their preferred choice of the restroom because they deserve the same rights as any other person, they do not come as a threat, and they shouldn’t fear of being verbally and/or physically attacked. If not provided a gender-neutral restroom to use within public spaces, transgender people face the difficulties of violence, harassment, and health issues.

Most people forget that we are all human beings. It may seem like we are all different on the outside, but internally we are all the same. According to Stephen Hawking,“ We are all different. There is no such thing as a standard or run-of-the-mill human being, but we share the same human spirit.” Everyone should use the restroom that matches who they are, regardless of whether they are transgender or not. It is only fair that transgenders have the same options to use the restrooms that normal people use. The only way to have a functional society is to make diversity as comfortable as possible. Why is it hard to let transgenders use the same bathrooms as other people? We have overcome many trials in the LGBTQ community, it should not be hard to fight for the right to be who you are. It should not be a law to make a simple choice of using a public restroom.

Transgender people should not have to be afraid of being verbally/physically attacked for using a public restroom. They should not be discriminated for using the restroom of the sex they identify as. Transgender people experienced many harsh things that brought them to the state of depression. For example, transgender people are always being verbally attacked by saying they are in the wrong restroom or told to leave it. They’ll be questioned about their gender, ridiculed or made fun of, or stared at and give strange looks at them. Some also have been physically assaulted before. They were forcibly removed from the restroom, hit, kicked, cornered, or being sexually assaulted. These experiences can cause traumas and affect their lives. Transgender avoid going to the public restrooms because of their fear of what might happen to them. They should be able to feel safe and comfortable in public restrooms instead of fearing the worst of their safety.

Instead of fighting to use the public restrooms, gender-neutral restrooms are the safest option for the LGBTQ community. Transgender people are not allowed to use the restroom of their choice for many reasons. One of those reasons is harassment. According to reuters.com, “Almost 60 percent of transgender Americans have avoided using public restrooms for fear of confrontation, saying they have been harassed and assaulted, according to the largest survey taken of transgender people in the United States”. There is a large number of people in this country who is afraid of using a regular restroom. It is absurd that people can’t even use the bathroom in peace, but it happens. And for those types of situations, the gender-neutral bathrooms is the safest solution. This type of bathroom is a single stall, locked bathroom for all of the LGBTQ community, all genders, people with disabilities, basically a safe space for all people to use. The gender-neutral restroom is not only a safe space for all genders but for people from all walks of life, promoting diversity and inclusivity one flush at a time. With gender-neutral bathrooms, this is a small step in gaining the society of acceptance some people have dreamed of.

Transgenders avoid public restrooms altogether because of their fear being assaulted or harassed in the public restroom. Not using public restrooms can inflict health issues. For example, they could have urinary tract infections, constipation, hemorrhoids, etc. There are other mental health issues like trauma. The harassment and violence could traumatize them to a certain degree. The trauma could cause them to not use public restrooms anymore, afraid to be with someone, or hating themselves for they are. The trauma could make them think because of who they are, that it is their fault for what happened, even though it was all just to use a restroom. This trauma does not have to happen if they use a gender-neutral bathroom. Gender neutral bathrooms can provide the safety for transgender people that accept who they are. Transgender people using public restrooms causes pain for them, but using gender-neutral restrooms can make them feel comfortable and safe.

Transgender people should have the same rights as any other person have. They should be able to feel safe and comfortable to do whatever they want, especially in the restroom. It is wrong that for years transgender people have been fighting for rights that are simple things other people do in their daily lives. Fighting for the rights to be able to marry the one they love, fighting for their country, and especially using the restroom of their preferred choice. The most basic thing any human does is use a public restroom, but to transgender, it is a constant fight and pain to do. “”Transgender individuals experience extremely high rates of harassment and violence when forced to use restrooms that accord with the sex assigned to them at birth,”” Chase Strangio, a staff attorney with the American Civil Liberties Union’s LGBT & HIV Project, tells SELF. Transgender people should be able to use their preferred choice of the restroom because they deserve the same rights as any other person, they do not come as a threat, and they shouldn’t fear of being verbally and/or physically attacked. If not provided a gender-neutral restroom to use within public spaces, they should not use public restrooms. The use of public restrooms by transgender people face the difficulties of violence, harassment, and health issues. Protecting transgender rights is what helps them be who they are in the world.

Use of Public Restrooms By Transgender People. (2019, Feb 10). Retrieved from https://papersowl.com/examples/use-of-public-restrooms-by-transgender-people/

Transgender Bathroom Bill: Support it or against It?

People in the LGBT Community should have Equal Rights

Institutional Violence and Discrimination of Transgender