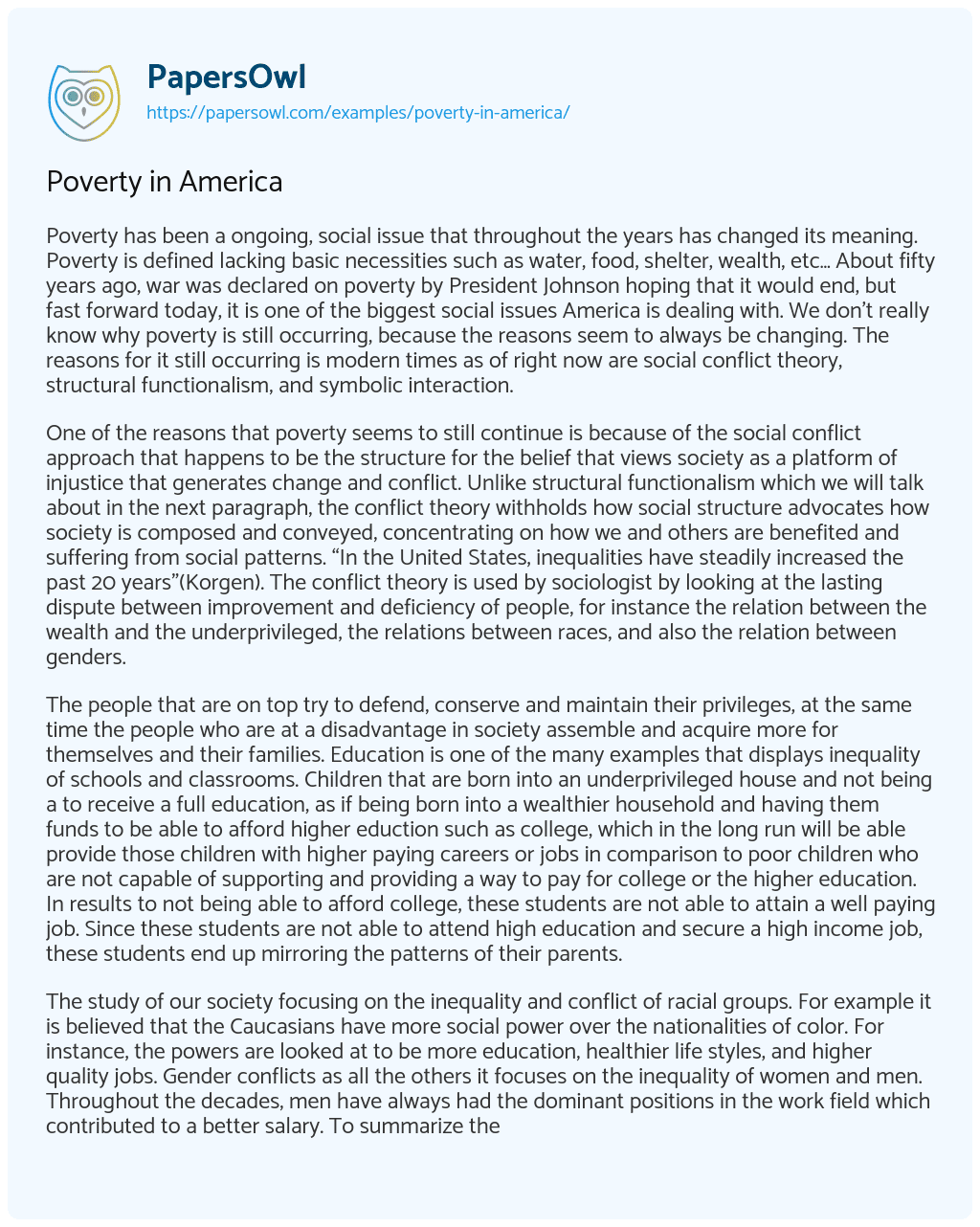 Poverty has been a ongoing, social issue that throughout the years has changed its meaning. Poverty is defined lacking basic necessities such as water, food, shelter, wealth, etc… About fifty years ago, war was declared on poverty by President Johnson hoping that it would end, but fast forward today, it is one of the biggest social issues America is dealing with. We don’t really know why poverty is still occurring, because the reasons seem to always be changing. The reasons for it still occurring is modern times as of right now are social conflict theory, structural functionalism, and symbolic interaction.

One of the reasons that poverty seems to still continue is because of the social conflict approach that happens to be the structure for the belief that views society as a platform of injustice that generates change and conflict. Unlike structural functionalism which we will talk about in the next paragraph, the conflict theory withholds how social structure advocates how society is composed and conveyed, concentrating on how we and others are benefited and suffering from social patterns. “In the United States, inequalities have steadily increased the past 20 years”(Korgen). The conflict theory is used by sociologist by looking at the lasting dispute between improvement and deficiency of people, for instance the relation between the wealth and the underprivileged, the relations between races, and also the relation between genders.

The people that are on top try to defend, conserve and maintain their privileges, at the same time the people who are at a disadvantage in society assemble and acquire more for themselves and their families. Education is one of the many examples that displays inequality of schools and classrooms. Children that are born into an underprivileged house and not being a to receive a full education, as if being born into a wealthier household and having them funds to be able to afford higher eduction such as college, which in the long run will be able provide those children with higher paying careers or jobs in comparison to poor children who are not capable of supporting and providing a way to pay for college or the higher education. In results to not being able to afford college, these students are not able to attain a well paying job. Since these students are not able to attend high education and secure a high income job, these students end up mirroring the patterns of their parents.

The study of our society focusing on the inequality and conflict of racial groups. For example it is believed that the Caucasians have more social power over the nationalities of color. For instance, the powers are looked at to be more education, healthier life styles, and higher quality jobs. Gender conflicts as all the others it focuses on the inequality of women and men. Throughout the decades, men have always had the dominant positions in the work field which contributed to a better salary. To summarize the conflict theory symbols the hierarchical division of society as result of poverty considering the low opportunities from injustice and unfairness towards race, ethnics and gender.

Structural functionalism, what is it? Structional Functionalism is defined as the framework for building theory that sees societies as a complex system, whose parts work together to form a stable and solidarity society. Functionalist look at society as a system of interconnected parts that work together in harmony to maintain balance for the whole. According to Hebert Spencer that the human body which needs all its parts to work properly remembers a social functionalism which needs all parts of society to function. Social structure does not always end good, and have happy outcomes, which as an aftermath of dysfunction interfering with how a society is normal ran or functioning. Poverty is thought-out to be functional since several careers like doctors and attorneys call for more schooling and proficiency rather than jobs working in retail or restaurants which don’t require little to no education and skill. These high paying jobs have been narrowed down to those people that are eager to learn and spend time and money in school while having the mind set that all of their hard work will pay off due to the immense salary they will earn.

Lastly, poverty continues in todays society because a thing called symbolic interaction. Symbolic interaction explains social behavior in terms of how people as a society are interacting with one another. A symbolic interactionist believes a society is an outcome of everyday social interactions of individuals. In the world we live in, there are many symbols with connected meaning to everything interpreting our surroundings, assumptions about people and contracting an identity for ourselves. For instance, wealthy and poor people are portrayed in society completely differently. We as people look at a wealthier person and think of that person as hard-working and well educated, while underprivileged and poor people may be portrayed as inattentive and not well educated.

Finally, it may be concluded as property will always be social issue and looked at as lacking necessities like food, water, shelter. The United States is known to be one of the wealthiest countries in the world, however in “2017 they’re are 12.3% of America population still living in poverty, which works out to be 1 in 8 Americans.” (Pressman) Poverty today is not the same as it was 100’s of years ago, the definition is continuously changing and can be looked at in many different ways such as the conflict approaches, structural functionalism and finally symbolic interaction.

America is Suffering from Poverty

Poverty and Homelessness in America

Combating Homelessness and Poverty in America

Nurses are One of the Many Victims who Suffer from Discrimination