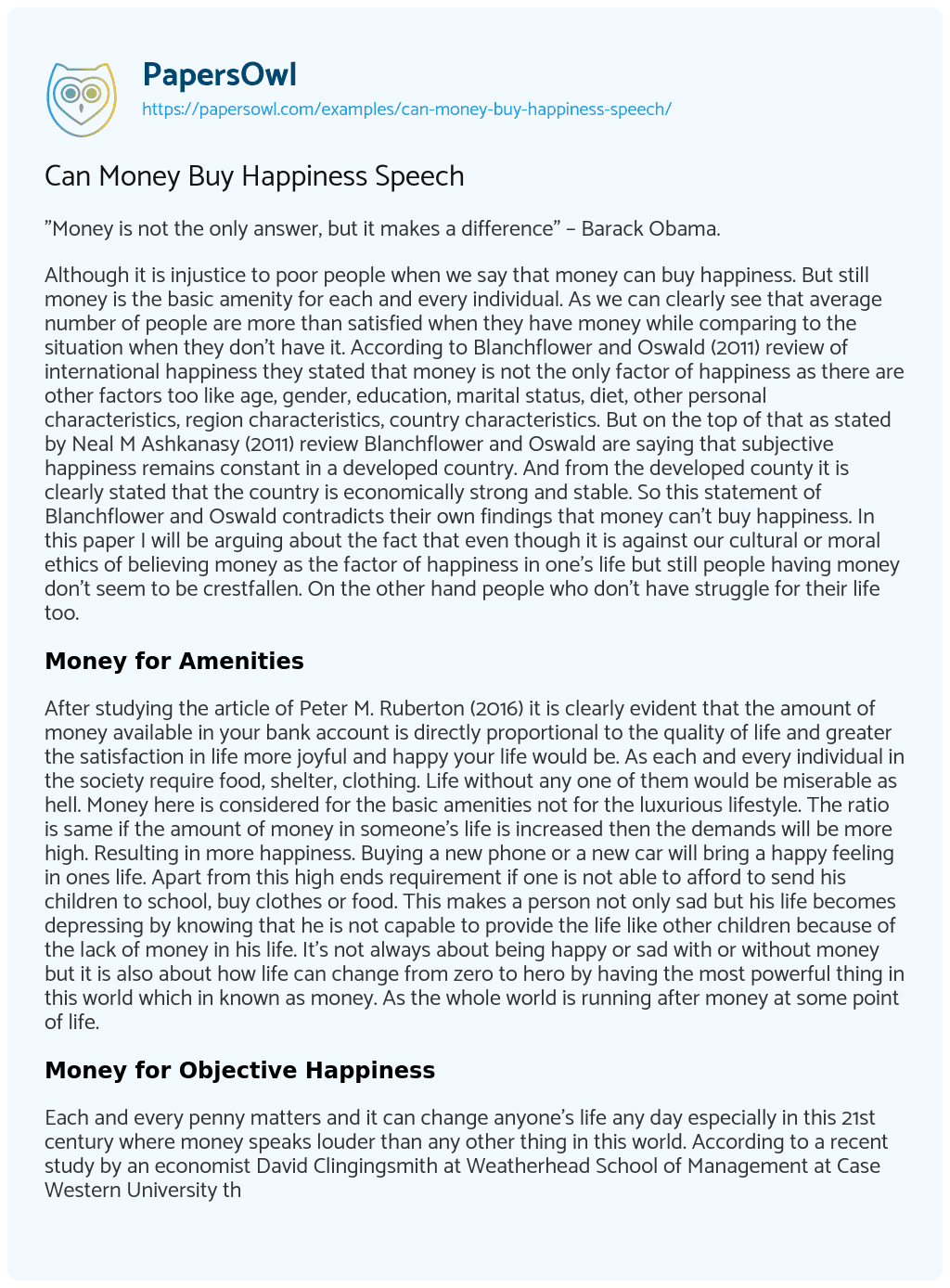 “Money is not the only answer, but it makes a difference” – Barack Obama.

Although it is injustice to poor people when we say that money can buy happiness. But still money is the basic amenity for each and every individual. As we can clearly see that average number of people are more than satisfied when they have money while comparing to the situation when they don’t have it. According to Blanchflower and Oswald (2011) review of international happiness they stated that money is not the only factor of happiness as there are other factors too like age, gender, education, marital status, diet, other personal characteristics, region characteristics, country characteristics. But on the top of that as stated by Neal M Ashkanasy (2011) review Blanchflower and Oswald are saying that subjective happiness remains constant in a developed country. And from the developed county it is clearly stated that the country is economically strong and stable. So this statement of Blanchflower and Oswald contradicts their own findings that money can’t buy happiness. In this paper I will be arguing about the fact that even though it is against our cultural or moral ethics of believing money as the factor of happiness in one’s life but still people having money don’t seem to be crestfallen. On the other hand people who don’t have struggle for their life too.

After studying the article of Peter M. Ruberton (2016) it is clearly evident that the amount of money available in your bank account is directly proportional to the quality of life and greater the satisfaction in life more joyful and happy your life would be. As each and every individual in the society require food, shelter, clothing. Life without any one of them would be miserable as hell. Money here is considered for the basic amenities not for the luxurious lifestyle. The ratio is same if the amount of money in someone’s life is increased then the demands will be more high. Resulting in more happiness. Buying a new phone or a new car will bring a happy feeling in ones life. Apart from this high ends requirement if one is not able to afford to send his children to school, buy clothes or food. This makes a person not only sad but his life becomes depressing by knowing that he is not capable to provide the life like other children because of the lack of money in his life. It’s not always about being happy or sad with or without money but it is also about how life can change from zero to hero by having the most powerful thing in this world which in known as money. As the whole world is running after money at some point of life.

Each and every penny matters and it can change anyone’s life any day especially in this 21st century where money speaks louder than any other thing in this world. According to a recent study by an economist David Clingingsmith at Weatherhead School of Management at Case Western University that negative feelings or sadness depends upon the amount of money people have in their life. Negative feelings increases with the decrease in the bank balance of an individual. Earlier bank balance was not the factor for these feelings but now with the increase in industrialization and urbanization money has become the most important and crucial factor in one’s life.

According to the science also many researches have demonstrated that the level of stress and depression is so less with the higher income of an individual. Approximately $70,000 gross income results in higher level of objective happiness on an average (John Rampton,2018).

There was another survey by the Princeton University that people having gross income more than $75,000 will be satisfied in their lives as compared to the people who have less than this (p. 2).

Money can reduce poverty and scarcity in the society when it is spend in a good deed as a generosity for the poor people by the rich ones. That is the ultimate happiness and desire for the pauper.

Many people think that money is just a medium for luxurious lifestyle but it cannot provide us happiness in a longer term. It is true that it is used for having bed of roses but this point is use when a person is having the money in abundance. But ultimately it is providing happiness only. Apart from this if we look in a broader perspective it should be included as the basic utility apart from food, shelter and clothing. As all the three of them are interconnected but the root is money for them.

Money or happiness should not be confused with the greed. Although this thing cannot be ignored that if this feeling comes inside someone then it will bring out bad intentions of stealing and robbery. But it differs from person to person and their upbringing. So the thing here is money do provide happiness but this greed factor depends upon the psychology of the person. And that is a different area to talk about.

We have noticed people using money for making their work done from others. But the person who is doing the work and when he will get paid for his hard work that thing will make him happy. So, at the end it’s the money that will make a person happy. Otherwise people won’t be working for anyone else if they will not get paid for their work. This thing will bring disappointment and sadness in people’s life.

As every coin has two sides. So, similarly this topic also brings two arguments with average number of people saying it brings happiness while the other disagreeing with the narrative. Money provides the basic amenity of life. Not only the amenities but also making their loved ones happy by providing them presents makes a person joyful. Happiness itself is a vast topic to talk about money here is just the medium which is helping to enable it. One can’t associate the entire happiness with a single word money. But this can also be not denied that money played a vital role in bringing happiness in ones life. In truth, this generation is grown in the era where happiness is associated with the materialistic things which is possible when you have the money in your hand.

Does Money Can Buy Happiness

Is Money a Source of Happiness or the Evil

Is Money Important for Happiness?

Essay on my Opinion: Can Money Buy Happiness?