Poverty Life in the Industrial Age 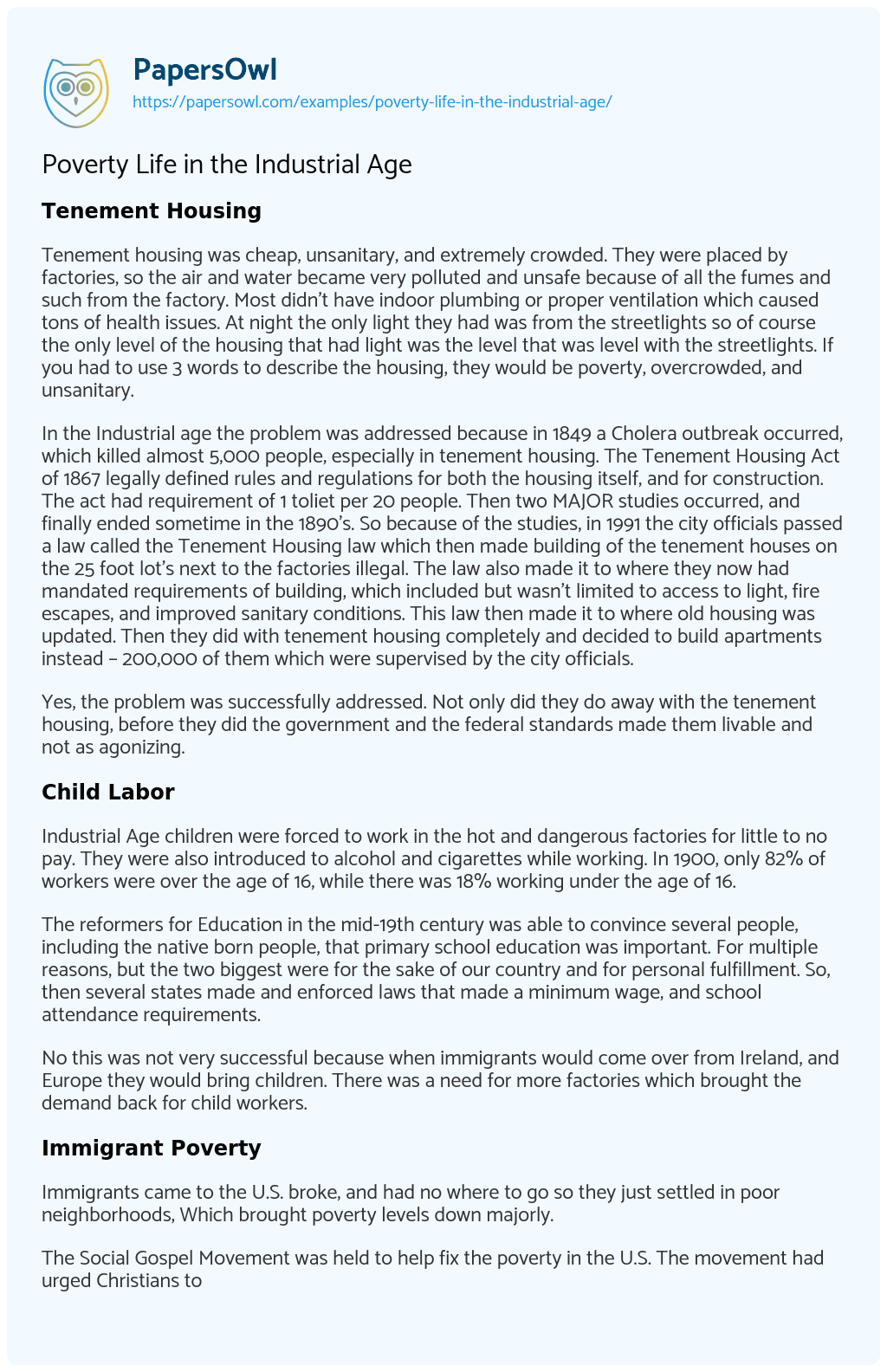 Tenement housing was cheap, unsanitary, and extremely crowded. They were placed by factories, so the air and water became very polluted and unsafe because of all the fumes and such from the factory. Most didn’t have indoor plumbing or proper ventilation which caused tons of health issues. At night the only light they had was from the streetlights so of course the only level of the housing that had light was the level that was level with the streetlights. If you had to use 3 words to describe the housing, they would be poverty, overcrowded, and unsanitary.

In the Industrial age the problem was addressed because in 1849 a Cholera outbreak occurred, which killed almost 5,000 people, especially in tenement housing. The Tenement Housing Act of 1867 legally defined rules and regulations for both the housing itself, and for construction. The act had requirement of 1 toliet per 20 people. Then two MAJOR studies occurred, and finally ended sometime in the 1890’s. So because of the studies, in 1991 the city officials passed a law called the Tenement Housing law which then made building of the tenement houses on the 25 foot lot’s next to the factories illegal. The law also made it to where they now had mandated requirements of building, which included but wasn’t limited to access to light, fire escapes, and improved sanitary conditions. This law then made it to where old housing was updated. Then they did with tenement housing completely and decided to build apartments instead – 200,000 of them which were supervised by the city officials.

Yes, the problem was successfully addressed. Not only did they do away with the tenement housing, before they did the government and the federal standards made them livable and not as agonizing.

Industrial Age children were forced to work in the hot and dangerous factories for little to no pay. They were also introduced to alcohol and cigarettes while working. In 1900, only 82% of workers were over the age of 16, while there was 18% working under the age of 16.

The reformers for Education in the mid-19th century was able to convince several people, including the native born people, that primary school education was important. For multiple reasons, but the two biggest were for the sake of our country and for personal fulfillment. So, then several states made and enforced laws that made a minimum wage, and school attendance requirements.

No this was not very successful because when immigrants would come over from Ireland, and Europe they would bring children. There was a need for more factories which brought the demand back for child workers.

Immigrants came to the U.S. broke, and had no where to go so they just settled in poor neighborhoods, Which brought poverty levels down majorly.

The Social Gospel Movement was held to help fix the poverty in the U.S. The movement had urged Christians to help the less fortunate and make their social conditions better.

Problem was fixed by this because of the point of shelters that were built. The shelters were able to give the poor and the homeless a safe and healthy place to live. Although this is still a problem in the U.S. today, we still have shelters.

Poverty Life in the Industrial Age. (2021, Apr 10). Retrieved from https://papersowl.com/examples/poverty-life-in-the-industrial-age/

History of Child Labour and Poverty