History of Child Labour and Poverty 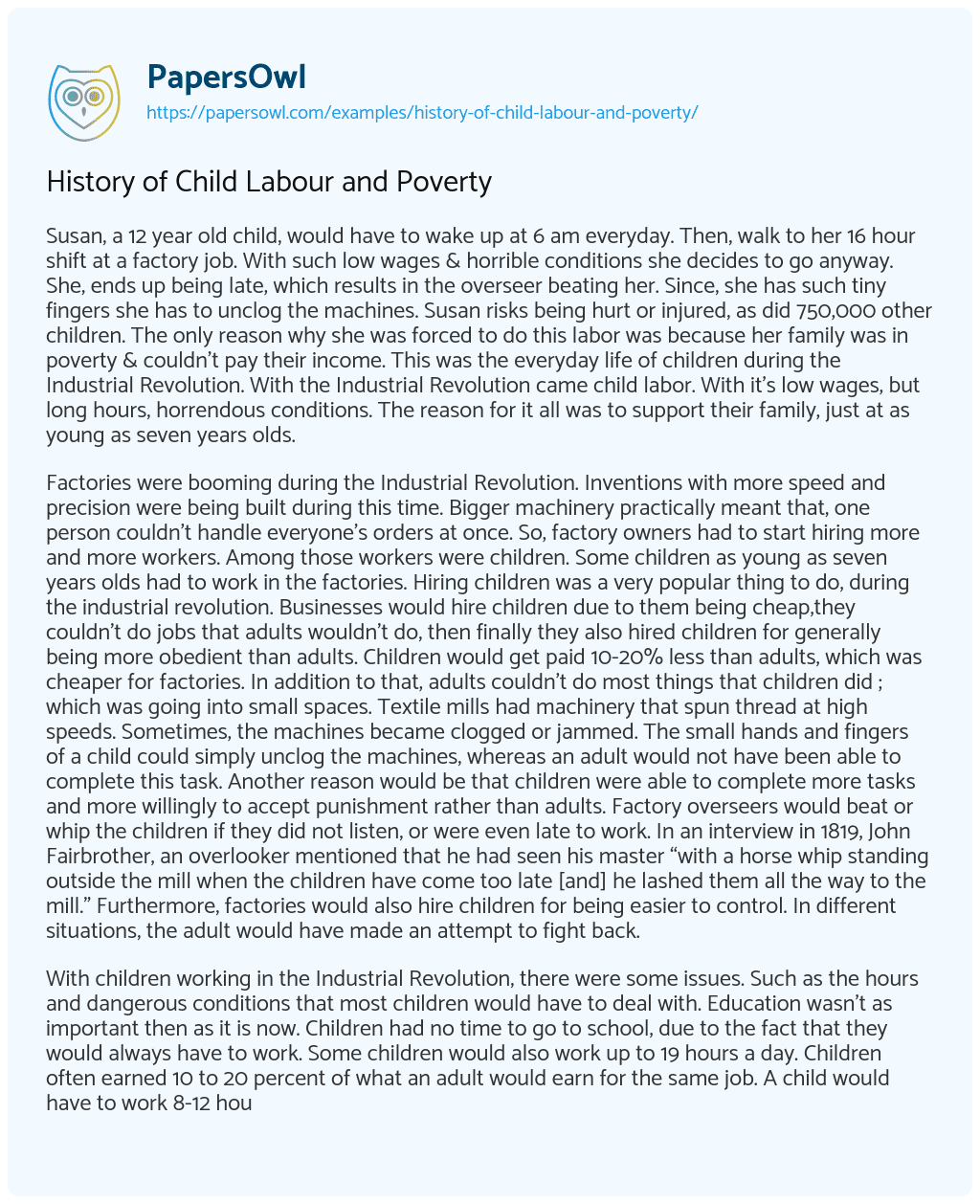 Susan, a 12 year old child, would have to wake up at 6 am everyday. Then, walk to her 16 hour shift at a factory job. With such low wages & horrible conditions she decides to go anyway. She, ends up being late, which results in the overseer beating her. Since, she has such tiny fingers she has to unclog the machines. Susan risks being hurt or injured, as did 750,000 other children. The only reason why she was forced to do this labor was because her family was in poverty & couldn’t pay their income. This was the everyday life of children during the Industrial Revolution. With the Industrial Revolution came child labor. With it’s low wages, but long hours, horrendous conditions. The reason for it all was to support their family, just at as young as seven years olds.

Factories were booming during the Industrial Revolution. Inventions with more speed and precision were being built during this time. Bigger machinery practically meant that, one person couldn’t handle everyone’s orders at once. So, factory owners had to start hiring more and more workers. Among those workers were children. Some children as young as seven years olds had to work in the factories. Hiring children was a very popular thing to do, during the industrial revolution. Businesses would hire children due to them being cheap,they couldn’t do jobs that adults wouldn’t do, then finally they also hired children for generally being more obedient than adults. Children would get paid 10-20% less than adults, which was cheaper for factories. In addition to that, adults couldn’t do most things that children did ; which was going into small spaces. Textile mills had machinery that spun thread at high speeds. Sometimes, the machines became clogged or jammed. The small hands and fingers of a child could simply unclog the machines, whereas an adult would not have been able to complete this task. Another reason would be that children were able to complete more tasks and more willingly to accept punishment rather than adults. Factory overseers would beat or whip the children if they did not listen, or were even late to work. In an interview in 1819, John Fairbrother, an overlooker mentioned that he had seen his master “with a horse whip standing outside the mill when the children have come too late [and] he lashed them all the way to the mill.” Furthermore, factories would also hire children for being easier to control. In different situations, the adult would have made an attempt to fight back.

With children working in the Industrial Revolution, there were some issues. Such as the hours and dangerous conditions that most children would have to deal with. Education wasn’t as important then as it is now. Children had no time to go to school, due to the fact that they would always have to work. Some children would also work up to 19 hours a day. Children often earned 10 to 20 percent of what an adult would earn for the same job. A child would have to work 8-12 hours and 6 days a week just to ea. rn one dollar. What made the situation worse, was the lack of breaks during the long shifts. Often workers were denied their breaks or were deducted pay. Then, to add on to the long hours there were horrible conditions. Children would lose their limbs or fingers in high powered machines. Spinning machines in textile mills were often left unguarded and posed a serious risk. For instance, a report from the British House of Commons in 1832 stated that “There are factories, no means few in number, nor confined to the smaller mills, in which serious accidents are continually occurring, and in which, notwithstanding, dangerous parts of the machinery are allowed to remain unfenced.” This situation caused industrial workers to become injured, as they were working dangerously close to spinning belts and shafts that powered the machines. There were 25,000 – 35,000 deaths and 1 million injuries occurred on industrial jobs. Factories in the Industrial Revolution were cramped and contained spaces. Often times, they were built without windows or ventilation and as a result the machines would quickly cause the inside temperature of the factory to increase dramatically. All of this combined to create a horrendous situation for the workers.

The living conditions in the cities and towns were horrible and would consist of overcrowding. In addition to that, there was poor sanitation, spread of diseases, and pollution. Workers would be paid such low wages that they wouldn’t be able to afford to live in the towns or cities . As a result, many of these working-class families needed the extra income that their children earned while working.

Working children can help the family and factories save money. The owners can reduce the cost of production, by hiring children. The children would work harder and would also be cheaper to pay. Children can also help reduce labor shortages, since in some cases some adults couldn’t work due to deformities from the workplace. The children can also help support the family just incase someone else in the family can not. In most cases the families who are in poverty would have an elder who is incapable of working. In like manner, they would be too poor to afford an education. As a result, a child would have a job to help pay for it.

Child labor during the Industrial Revolution had some faults. Such, as hiring such young children. Then with, forcing them to work in horrendous conditions with places with little to none ventilation in the summer. To, having such long hours with some children having 16 hour days. Something equally important were the low wages, getting $1 just for working a full week. All of this just to support their families. At the same time, child labor had also helped families and factories gain money. Child labor today, is luckily outlawed in most places. The Industrial Revolution had impacted the world we see today, with its modern machinery & it being the cause of child labor laws.

History of Child Labour and Poverty. (2021, Apr 15). Retrieved from https://papersowl.com/examples/history-of-child-labour-and-poverty/