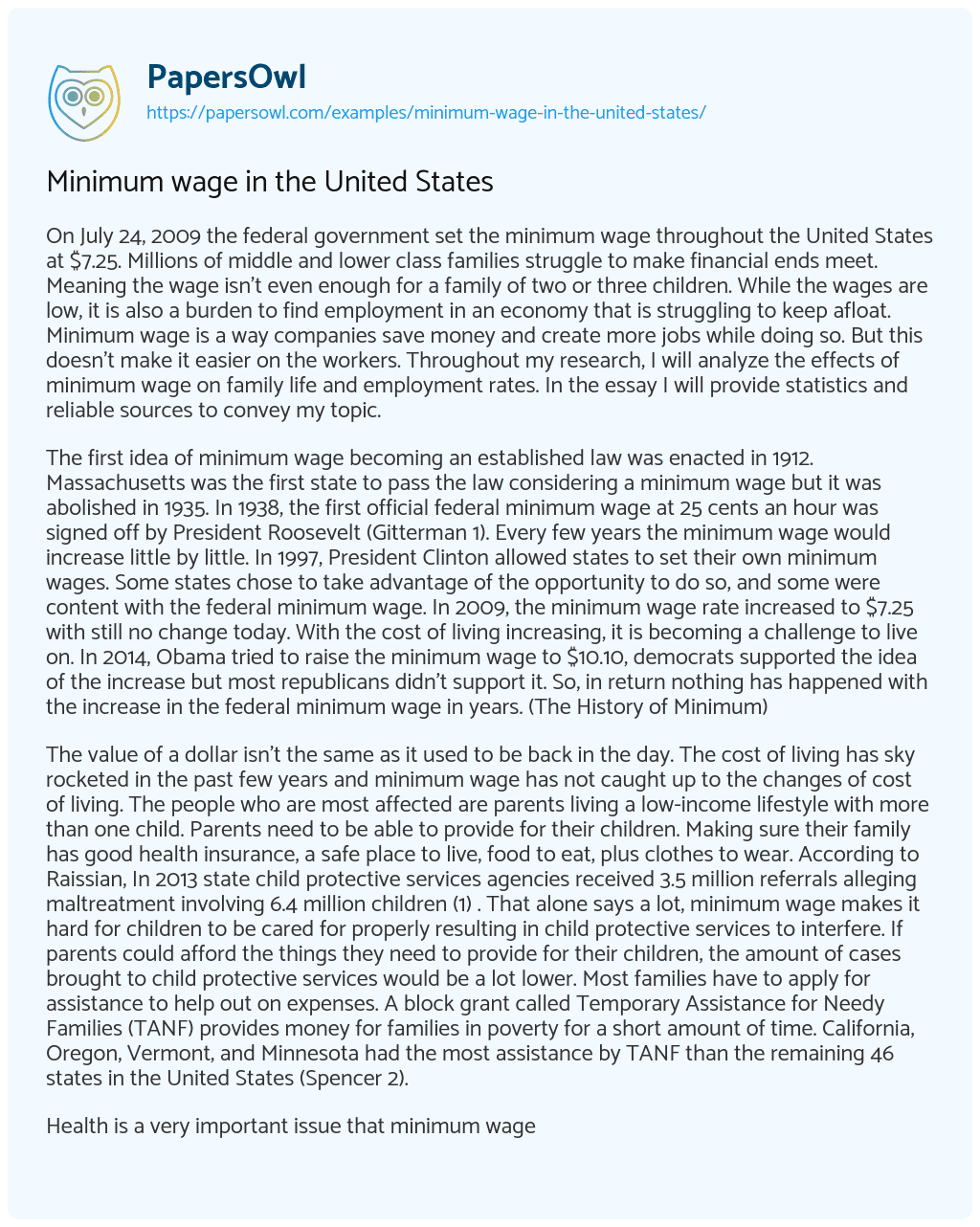 On July 24, 2009 the federal government set the minimum wage throughout the United States at $7.25. Millions of middle and lower class families struggle to make financial ends meet. Meaning the wage isn’t even enough for a family of two or three children. While the wages are low, it is also a burden to find employment in an economy that is struggling to keep afloat. Minimum wage is a way companies save money and create more jobs while doing so. But this doesn’t make it easier on the workers. Throughout my research, I will analyze the effects of minimum wage on family life and employment rates. In the essay I will provide statistics and reliable sources to convey my topic.

The value of a dollar isn’t the same as it used to be back in the day. The cost of living has sky rocketed in the past few years and minimum wage has not caught up to the changes of cost of living. The people who are most affected are parents living a low-income lifestyle with more than one child. Parents need to be able to provide for their children. Making sure their family has good health insurance, a safe place to live, food to eat, plus clothes to wear. According to Raissian, In 2013 state child protective services agencies received 3.5 million referrals alleging maltreatment involving 6.4 million children (1) . That alone says a lot, minimum wage makes it hard for children to be cared for properly resulting in child protective services to interfere. If parents could afford the things they need to provide for their children, the amount of cases brought to child protective services would be a lot lower. Most families have to apply for assistance to help out on expenses. A block grant called Temporary Assistance for Needy Families (TANF) provides money for families in poverty for a short amount of time. California, Oregon, Vermont, and Minnesota had the most assistance by TANF than the remaining 46 states in the United States (Spencer 2).

Health is a very important issue that minimum wage effects. Most people who are making minimum wage aren’t very healthy or aren’t making very healthy decisions. According to Andreyeva, a minimum wage increase should lead to more consumption of normal goods such as healthier foods, and broader health investments while decreasing the consumption of inferior goods such as fast food (338). People are eating fast food more because it is inexpensive and convenient. Healthy foods are way more expensive and with a minimum wage rate paycheck it is just easier and smarter to buy unhealthy foods to save money which shouldn’t be the case at all, but it is. Health care services aren’t being used much by low income families because most families cannot afford it. Everyone should be entitled to great healthcare and health insurance.

Even though minimum wage is a burden on families, it isn’t such a burden on the economy. Minimum wage rates help the employment rate to continue to increase and right now it is at an all-time high. According to Marimpi, labor force participation rates of individuals below the age of 25 are about 10 and 12 percentage points higher, so there is more youth employment adding to the increasing employment rate (1). While the idea of the minimum wage rate being increased is a good thing for low-income families and anyone struggling to keep up with the cost of living and the continuous inflation of products it wouldn’t be a good idea for companies or employees. A rise in minimum wage would mean a decrease in the employment rate. If employees are already struggling to provide for their families, they really will be if they are one of the unlucky ones to lose their job. Companies would no longer be able to hire as many people as they used to because they wouldn’t be able to pay them. An increase in minimum wage means a major budget cut. There would also be an increase in the cost of living. So, you really can’t win for losing. The economy would have to balance expenses out one way or another. Also, people would be laid-off in slower and smaller businesses because of the budget cut and not being able to pay their employees. (Doyle 1)

The minimum wage rate has been at a stand-still at $7.25 since 2009. There has been complications and struggles for low-income families to keep up with the cost of living while ensuring children have what they need at all times including great healthcare. While a minimum wage increase would be a huge change and a great change at that to help families in poverty, it wouldn’t be such a great idea for the economy. Employees would be laid off and the employment rate would rapidly decrease. A negative outcome for wanting an innocent change. There are consequences to change especially with money. The government just won’t willingly help out. They have to make money in the process. In my essay, I analyzed the effects of minimum wage on family life and employment rates. The talk of minimum wage will always be an on-going problem and topic of this country. Americans are waiting for a change. It doesn’t look like anything will happen anytime soon But, the question is will it ever happen?

Minimum wage in the United States. (2019, Apr 27). Retrieved from https://papersowl.com/examples/minimum-wage-in-the-united-states/