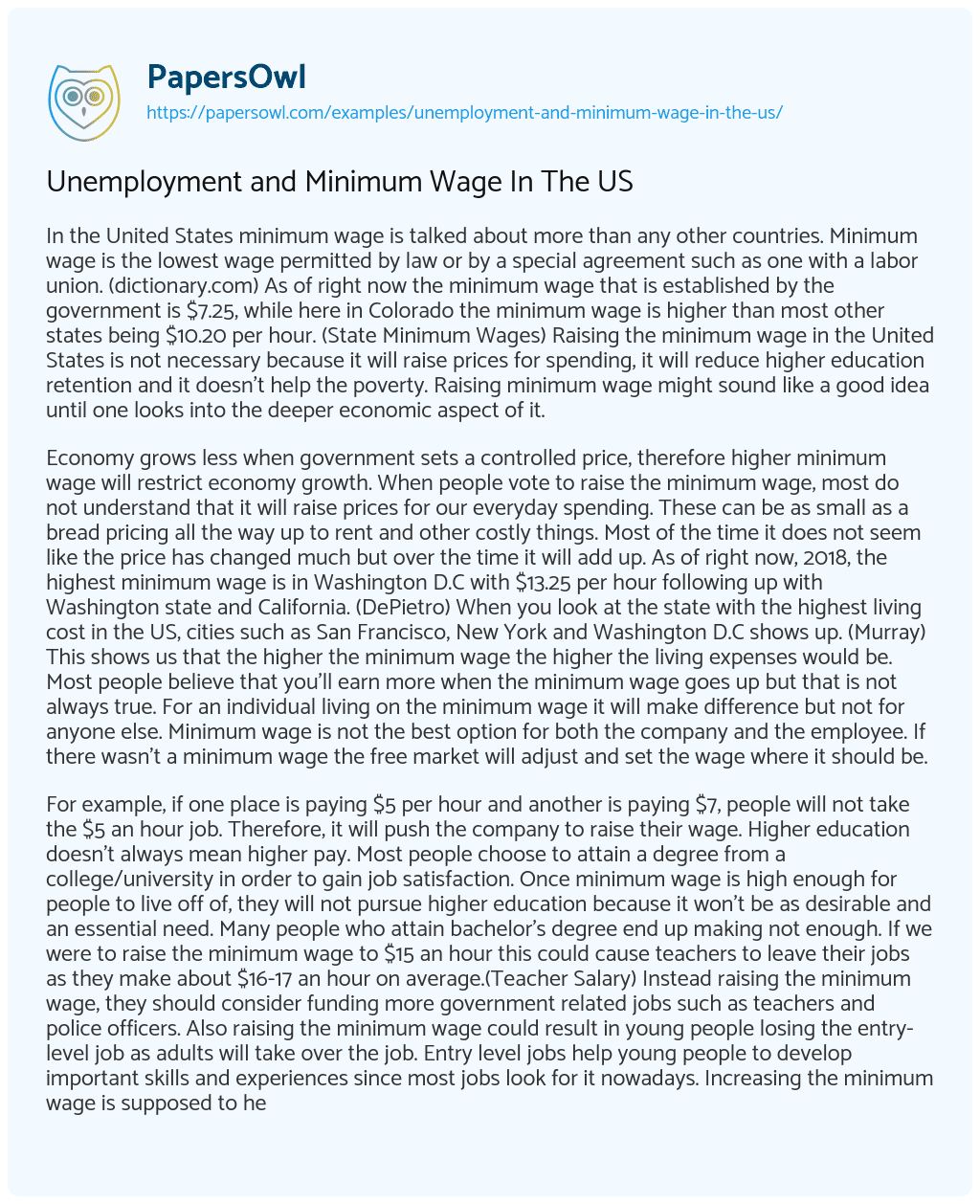 Economy grows less when government sets a controlled price, therefore higher minimum wage will restrict economy growth. When people vote to raise the minimum wage, most do not understand that it will raise prices for our everyday spending. These can be as small as a bread pricing all the way up to rent and other costly things. Most of the time it does not seem like the price has changed much but over the time it will add up. As of right now, 2018, the highest minimum wage is in Washington D.C with $13.25 per hour following up with Washington state and California. (DePietro) When you look at the state with the highest living cost in the US, cities such as San Francisco, New York and Washington D.C shows up. (Murray) This shows us that the higher the minimum wage the higher the living expenses would be. Most people believe that you’ll earn more when the minimum wage goes up but that is not always true. For an individual living on the minimum wage it will make difference but not for anyone else. Minimum wage is not the best option for both the company and the employee. If there wasn’t a minimum wage the free market will adjust and set the wage where it should be.

For example, if one place is paying $5 per hour and another is paying $7, people will not take the $5 an hour job. Therefore, it will push the company to raise their wage. Higher education doesn’t always mean higher pay. Most people choose to attain a degree from a college/university in order to gain job satisfaction. Once minimum wage is high enough for people to live off of, they will not pursue higher education because it won’t be as desirable and an essential need. Many people who attain bachelor’s degree end up making not enough. If we were to raise the minimum wage to $15 an hour this could cause teachers to leave their jobs as they make about $16-17 an hour on average.(Teacher Salary) Instead raising the minimum wage, they should consider funding more government related jobs such as teachers and police officers. Also raising the minimum wage could result in young people losing the entry-level job as adults will take over the job. Entry level jobs help young people to develop important skills and experiences since most jobs look for it nowadays. Increasing the minimum wage is supposed to help reducing the poverty. Unfortunately, that is not very true because it creates unemployment. When the minimum wage rises, the demand for labor will rise and that makes the market, for finding a job, competitive. At the same time smaller businesses could go out of business because they can’t afford to pay their employees the new high minimum wage. Each $1 increase in the minimum wage results in a 4-10% increase in the likelihood of restaurants closing. (Harvard). If the government puts a minimum wage of $10 an hour, a company would be able to hire half as many people as they could if there wasn’t a minimum wage. If there wasn’t a minimum wage the company could pay $5 an hour for 2 employees and therefore there would be less unemployment.

So, in the end raising the minimum wage will increase poverty due to unemployment. The work force that are not getting paid as much, minimum wage workers, tend to spend more percentage of their earnings than the ones that are earning more. (Shannon) Spending money helps the economy to circle the money around faster. Raising the minimum wage by 10% reduces only 2.5% of poverty.(Cooper) Although it is helping a little bit at some point it will result in inflation. Diagram of minimum wage. In conclusion, minimum wage in the United States should not be raised. Raising the price floor for minimum wage could bring more harm to the economy than benefits. Simply adding a couple cents or dollars to the current minimum wage can make huge differences in people’s life and their everyday spending. Higher pay doesn’t help the ones in need. The raise of minimum wage won’t help poverty because most of the minimum wage earners are second income earners. Higher minimum wage could also have an effect on the retention rate of higher education. We as human beings work in order to earn and survive. (Robin) If you were to ask a student that is enrolled in some kind of college or someone who graduated on why they pursued higher education, most will answer with for higher pay. If one can earn high enough pay without a degree, many would choose to not go to college and get a degree. The topic of raising minimum wage is very political and controversial and these are my opinions on it.

Unemployment and Minimum Wage In The US. (2019, Sep 01). Retrieved from https://papersowl.com/examples/unemployment-and-minimum-wage-in-the-us/